You are the chosen one. The unique individual who is destined to save the world, save the galaxy, or the universe depending on the threat level. It’s a clichéd narrative tool that has become commonplace in stories throughout history, but there’s a good reason for it. Narita Boy may seem familiar in terms of its initial premise, but it makes up for it in what it tries to say using that premise. Being an on-the-nose 80s videogame throwback to titles such as Castlevania or Space Quest grounds the game heavily in nostalgic overtones for reasons other than nostalgia for nostalgia’s sake. Narita Boy is a story about grief and the emotional journey of trying to process that grief through nostalgia.

It wasn’t a topic I expected, nor was I prepared to explore in this style of game but Narita Boy is able to use these themes surprisingly well and to great effect. That’s not to say there isn’t a game to enjoy here from a gameplay perspective. The game provides a good amount of challenge when it comes to both platforming and combat, with a skill ceiling that is not entirely different from games it’s paying homage to. However, this clear replication of design also sadly retains some unwanted shortcomings that by no means make the experience worse, but just simply make it harder to fully engage with in a consistent way.

Narita Boy has an eclectic aesthetic in a way that is both charming and seemingly born from the mind of an over-imaginative child. This isn’t a negative aspect of the game’s overall style, but rather a positive endorsement that the artists in charge of bringing this cyberpunk/fantasy world to life should be applauded for their work and attention to detail. It’s obvious from the beginning of the adventure that the realm of the digital kingdom is vast and colorful, and its simplicity makes for wonderful landscapes and takes full advantage of the set limitations that retro gaming palettes provide. I simply adore looking at this game as I play, and the added option to put a subtle CRT filter over the top of it truly makes the experience that much more immersive.

Combine this with a fantastic soundtrack composed by Salvinsky, and the overall package comes together beautifully. Everything from the menu music to boss fights, the use of synths and funky beats make it a joy to listen to even when not playing the game (I’m listening to the soundtrack right now!). And unlike games from its era, Narita Boy is free to include more of the soundscape as it isn’t limited by the hardware of the time. This makes for a fuller and richer audio flavour that just elevates the overall soundscape of the game. You could be mistaken that you’re listening to Daft Punk or a track from the non-existent sequel to Tron, it’s that fantastic of an audio experience. 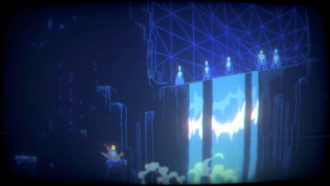 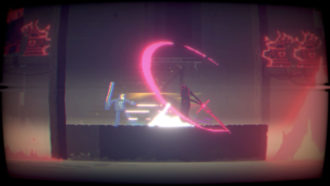 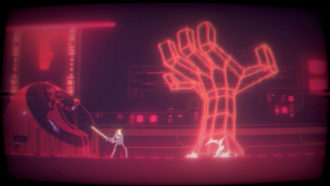 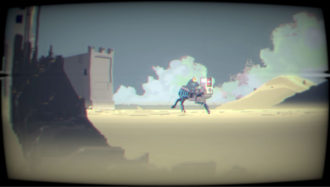 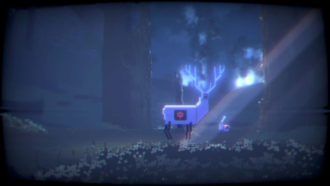 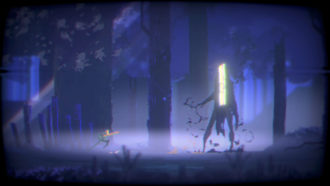 “Combine this with a fantastic soundtrack composed by Salvinsky, and the overall package comes together beautifully.”

The visual and audio experience of Narita Boy are no doubt its most alluring aspects, but that’s not to say there isn’t fun to be had or challenges to overcome. The game isn’t overly difficult but can still lead to frustration at times. Whether this was intended or not, it perfectly replicates the struggles of games past. Platforming is easy enough with added dashes and jumps for some added variety. But when you mistime a jump or misjudge a gap, boy does it feel extra bitter.

Combat is where Narita Boy chooses to challenge the player, with various enemy types and a plethora of skills and abilities to help deal with each threat. You’re almost given too many abilities to the point where I forgot which key does what during the heat of combat, which can lead to a world of pain. While a pop card does showcase what each ability does upon receiving them, it would’ve been beneficial to better reinforce the tutorialisation aspect a bit. Even so, combat remains fun and exciting when you’re not busy forgetting what button is bash and not evade.

Boss encounters are where things get interesting, both in terms of enemy attack patterns and some truly horrific and slightly grotesque character designs. Thankfully the game is also generous with checkpoints, as well as not having any limitations such as lives. Retrying after a failed attempt doesn’t feel like a slog, and I was able to breeze through most of the game without feeling like I was stuck or being blocked from progressing.

Narita Boy’s narrative is by far it’s most fascinating. While the overarching plot is sometimes hard to follow, suffering from extreme technobabble dialogue and exposition; the story is at least contextual enough to provide a fun adventure. The real strength comes from the contrasting narrative taking place “outside” Narita Boy the game. The struggles of the creator of Narita Boy and the trauma of his past are put front and center for the player to uncover and eventually understand. While a lot is left up to interpretation, the overall messaging is focused on video games’ ability to provide an escape from our sometimes harsh realities.

It’s a pure escapist fantasy that indulges in the chosen one story, where players can feel in control of their own stories. And it’s the Narita Boy adventure that allows players to feel empowered and not simply feel life happening to them, but rather them having a direct impact on their lives. This emotional core is the meta-narrative of the inherent power video games have as a medium, and the ability they have to provide that escapism and emotional catharsis when coming to terms with real-life emotional struggles. It’s something I’ve never seen directly commentated on in this positive of a light, and it was really refreshing to see this game tackle how video games can be a positive and healthy form of escapism.

Narita Boy is a surprisingly melancholic experience that puts forth a narrative exploring the power fantasy that video games provide people. Or rather more accurately, it gives the player power over their own journey as well as the skills necessary to overcome obstacles. It contrasts the beautiful and fantastical pixel world it’s created, with a very human story of hardship and grief. Video games provide the perfect outlet for escapist fantasies and Narita Boy understands this. But it also understands that the reason to escape the hardships of the day are not always self-serving affairs, but rather are ways to reinvigorate our own worldview to where we might better ourselves and our outlooks on life.

It’s a subtle juxtaposition that elevates the game from not simply being a nostalgic reinvention of games long past, but a transformative experience that aims to highlight why people choose to play video games in the first place. While the execution of the game itself can sometimes be lacking, it pays enough of an homage to its inspirations and celebration of the era while at the same time creating a visually creative world that could’ve been mistaken as having released a few decades ago.