The Legend of Heroes: Trails of Cold Steel IV Review – The end of a Saga

The Legend of Heroes: Trails of Cold Steel IV has been out in the West since 2020, but only on PS4. I imagine that most Trails fans will have purchased the game without delay on PS4, having had to wait for 2 years for its localisation. If you’re looking to purchase the game on the new PC or Nintendo Switch versions, I can only assume you are one of two types of people: either you’re a diehard fan looking to purchase the game again on a new platform, or a Nintendo Switch owner who has seen it go up on the eShop and is wondering what the deal is all about.

For those who came in late

If you’re in the latter category, be warned: Trails of Cold Steel IV is not a forgiving game for newcomers. To even have a chance of understanding the game’s incredibly large story, you’ll need to have played Trails of Cold Steel III at the very least, as IV directly continues from III’s cliffhanger ending. But it’s recommended to start as early in the series as you can bother with, or else you’ll end up missing heaps of backstory. This is one hell of a task, though, as to start at the very beginning would mean playing through not just the previous Cold Steel games but the Trails of the Sky games, plus the Japan-only Crossbell series.

Trails of Cold Steel IV is the climax of one wild ride, and I’m sure the ending was satisfying to the vast majority of fans. I’ll have to take their word for it – Cold Steel IV does such a poor job of inducting new players that I literally lost the plot within the first two chapters.

The problem is not that the game has a lot of backstory and lore, nor that it requires your attention to detail. At the core of Cold Steel’s problem is that it doesn’t seem to care how big and unwieldy it’s become. The first two chapters wisely only focus on a handful of the series’ dozens of characters at a time, but once it gets into the swing of things, cutscenes will commonly have more than 10 characters all weighing in their 2 cents. These dialogue scenes are bloated with lengthy exposition, and a story as massive as this one needed a far more engaging way to be told.

“Cold Steel IV is resting on its laurels when it could have delivered something refreshed and new.”

I get the impression that Cold Steel IV is hiding behind the guaranteed interest garnered by its fans. Without the story to engage me, I looked to the gameplay for something interesting but once again was left disappointed. Cold Steel IV plays like so many other JRPGs – when not engaged in lengthy dialogue scenes, players are travelling across fields, forests or highways on their trip to the next town, stopping to battle with the occasional monster. Dungeons are maze-like and filled with harder enemies followed by a boss, and towns will have a few NPCs to talk to and shops to buy from.

It feels as if Cold Steel IV is resting on its laurels when it could have delivered something refreshed and new, rather than just what feels like a Cold Steel III remaster. Even the graphics look almost identical to the previous game. I think series fans can and will overlook all this – after all, the main attraction is the story, and the gameplay is still fun even if it’s a little outdated. The soundtrack is genuinely beautiful, and there a fair few minigames to keep you occupied. But really, there’s no advantage at all to playing Cold Steel IV first. 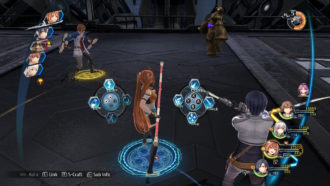 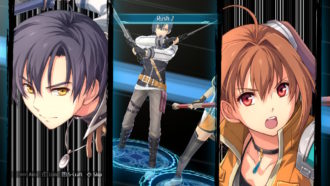 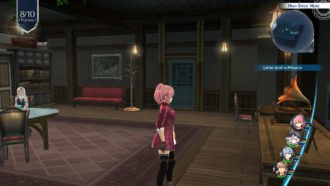 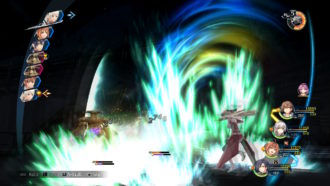 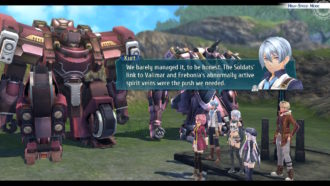 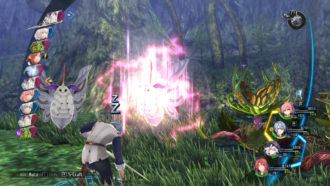 The Nintendo Switch runs Cold Steel IV almost perfectly, albeit at 720p and capped at 30fps. There were only a few dropped frames around the more busy areas, and it’s certainly nothing that would ruin the experience. The portability of handheld mode is a godsend for those long dialogue scenes, since you’re not stuck to a TV screen for the whole time. The lowered graphical quality is mostly only noticeable on text, such as place names and menu options, where they appear fuzzier.

The two major downsides to the Switch version are actually nothing to do with performance. Trophies that were available on the PS4 version are gone from the Switch, which makes all those minigames throughout the game a little less rewarding. The completionists among you might find this to be a dealbreaker. In the PS4 version, there were some bonus extras that were rewarded to those who had save data for the previous games in their system: one set of bonuses for each title in the Trails series. The Switch version only offers this bonus for save data for Cold Steel III. This is presumably because it’s the only other Trails game available on the platform, but it seems stingy.

Otherwise, the only other downside is some slightly longer load times. It’s nothing too bad, but as so much of the game involves going in and out of various locations, it might get annoying. The Switch’s loading screens are commonly just a few seconds longer than the PS4’s, not to mention the lightning-fast load times you’d see playing on a PS5.

The minigames Vantage Masters and Pom! Pom! Party! are perfect to play in handheld mode, making it a more comfortable experience when just chilling out with the game’s more light-hearted elements.

The Legend of Heroes: Trails of Cold Steel IV is a game made for fans, and no-one else. It’s not a bad thing to know one’s audience, but it’s a huge turn off for anyone who doesn’t want to sink an average of 400+ hours into the previous games. Cold Steel IV focuses on the long-awaited climax of the long-running series, and it certainly delivers on ramping up the stakes to the max. But with only slight updates to every other aspect of the game, it just ends up feeling like I’m playing Cold Steel III.

Series fans will enjoy this game no matter what. But if you are a series fan, I’m assuming you’ve already played it on PS4. If you’re looking to buy it on another platform, the evidence stacks up in favour of the PC version because of the Switch’s downgraded graphics and lack of achievements unless you really want that handheld portability. If you’re not a series fan yet, then go back to page 1 and start at the beginning. This game will not make a lick of sense to you.