Ys IX: Monstrum Nox is the sequel to one of the best action RPGs I have ever played. Ys VIII: Lacrimosa of Dana was a small triumph for developer Nihon Falcom, updating the series’ strategic button-mashing gameplay into its best version yet, giving players a huge deserted island to explore, while trying out wild new ideas with narrative. I say all this because apart from a few important changes, Ys IX looks and plays a lot like Ys VIII. But this is not a bad thing. For fans (like me) who fell in love with Ys VIII and wanted more of the same experience with a few new bells and whistles, Ys IX has you covered.

Ys IX takes place in and around the bustling city of Balduq, a grim fortress built around a deadly prison. At the start of the game, series protagonist Adol is arrested and sent to said prison for crimes he didn’t commit. He quickly escapes, but not before a mysterious woman turns him into a Monstrum: a super-powered being who is cursed never to leave the city. Adol and his new Monstrum allies are tasked with fighting monsters from another dimension, keeping their secret identities secret, and solving the mystery of their curse, which all seem to link back to the prison they just escaped from.

When someone turns into a Monstrum, they receive a new outfit, eye colour, hair colour and hairstyle. So, by anime standards, they’re a totally different person. It’s fun that the story makes the characters struggle between their Monstrum lives and regular lives, Clark Kent style, and it was interesting to see twists in discovering who some of these Monstrums really are. Most of these reveals were predictable AF, but they add an entertaining dynamic to the character relationships.

While the polar opposite of the tropical Isle of Seiren from Ys VIII, Balduq is similarly packed with nooks and crannies to explore. While only a few buildings can be entered, shops and collectables are scattered across the city. I even found myself stumbling into several hidden dungeons which, while not as expansive as the massive dungeons you’ll explore during the main story, were still exciting to find.

Ys IX contains a huge explorable area that you’ll need to revisit repeatedly throughout the game. Making this process easy and fun are Gifts: an exploration-based power that each Monstrum has. At the start, Crimson King (Adol’s Monstrum name) has his Crimson Line, which lets him grapple up onto roofs and towers. More Monstrums join the party throughout the game, with each letting you use their individual Gift. Hawk lets you Arkham-style glide across the city. White Cat has an inFamous-esque wall run. These first three gifts will be what you use the most (the others are only useful in specific contexts) and Balduq is designed with a lot of verticality to make use of them.

As fun as Gifts are, they’re not as intuitive as I would’ve liked. If you’re looking at multiple grapple points at once, it’s a crapshoot to land where you want. And wall running can be very clumsy. Since it’s mapped to the sprint button, I often found myself sprinting past whatever I’m trying to climb. And many of the roofed walls around Balduq prevent you from climbing them, which you can only find out by reaching the top, then falling back down. There’s no fall damage, so it’s a minor inconvenience, but also a frequent one. But I couldn’t deny, gifts made walking around the city a treat. I could run up a tower, grapple onto its peak, then glide across buildings to get to my destination faster, provided I had enough stamina to make the trip.

Balduq, from all angles, is awe-inspiring. Even when you finally gain access to the fields and mountains outside the city, you can still see it in the distance, with enough clarity to recognise specific landmarks. The world of Ys IX is designed with plenty of opportunities for “I can see my house from here” moments. It’s a cliché to say, but the city does feel like a character, and I grew more and more attached to it over the course of my time with Ys IX.

Return of the Crimson King

If you liked Ys VIII’s combat, Ys IX’s combat is pretty much exactly the same. You’ve got an attack button, a dodge button, and a block button. Blocking at the right moment triggers a Flash Guard, giving you invincibility and critical hits for a few seconds. Dodging at the right moment triggers a Flash Dodge, slowing all enemies and speeding you up for a few seconds. As always, finding situations where you can Flash Guard and Flash Dodge at the same time is extremely satisfying. Just like the previous three games, each playable character specialises in one of three types of damage, so it’s important to switch characters regularly to match enemy weaknesses.

“The world of Ys IX is designed with plenty of opportunities for ‘I can see my house from here’ moments.”

Adol’s got brand new party members with new combat abilities, and your Extra Gauge now lets you activate a powerful Boost Mode instead of perform a single attack, but other than that, it’s the same buttery smooth gameplay from Ys VIII.

Another thing Ys IX does as well as its predecessor is its excellent boss fights. Each one is creative, memorable and the perfect level of challenge. Even I, a noob, had a great time learning their attacks and knowing when to Flash Move my way to victory.

It’s interesting to see how much of Ys VIII’s format has mapped onto Ys IX. Where VIII had you running around the island to find castaways to bring back to your fledgling village, Ys IX has you (inexplicably) run a pub! By completing side quests, you can find more people waylaid by Balduq Prison to bring back to your bar. A lot of these characters are optional to recruit, but each one provides a benefit in some way, usually a new kind of shop. Continuing Ys tradition, every character in the game is new to the series apart from Adol and his best friend Dogi. The supporting cast are all lovable and/or interesting to some degree, and they all have storylines that develop over the game if you make the effort to see them through.

Due to the nature of the Monstrum curse, not all of Balduq is accessible from the outset. There are big purple walls of magic barring your way until you accrue enough Nox (from fighting monsters around town) to trigger a Grimwald Nox, similar to Ys VIII’s Raids. These are either wave-based enemy gauntlets or time-based challenges, the completion of which will unlock new areas of the city. Where the last game organically barred off where you could explore depending on how many castaways you’d rescued, the way it’s handled in Ys IX feels better for gameplay, but messier for narrative.

Also returning is a watered down version of Ys VIII’s fantastic bartering system, where instead of currency, you traded found materials for other materials that you need to forge weapons and armour and healing items. What waters it down specifically in Ys IX is the fact that, since you’re in a big city, you’ve now got money alongside the bartering. I found this a bit deflating, since you could just buy items if you didn’t have enough to trade. But while it’s not as interesting, I’ll admit it’s a faster way to get equipment.

Ys IX also has a parallel story like Ys VIII did, where at specific points you will briefly control another character, with their intentions being unclear until late in the game. I don’t want to spoil anything about these sections because I think it’s a genuinely clever mystery leading to a juicy payoff, but I will say they were frustrating to play. Lots of tedious puzzles, cheap deaths and poor checkpointing. But these sections are mercifully short, and there aren’t many of them.

The Flat Textured Elephant in the Room

If you’ve looked at trailers or screenshots of Ys IX, one fact may become painfully obvious: this game doesn’t look great. Now, I’m usually not one to care about graphical quality in games – as long as it plays well and I’m having fun, nothing else matters. But much like Nihon Falcom’s Trails series, Ys IX seems to still be using the graphics engine they developed to make PS Vita games in 2009, and it shows.

Balduq and its surrounds are impressive in scope and design, to the degree that I wished the game had a Photo Mode. But the whole game is full of janky textures, clipping issues, and characters doing that thing where they don’t have a “turning to the side” animation, so they go into their walking animation while rotating in place. Due to Balduq’s populace, you’re going to see character models recycled to an alarming degree among the townsfolk. Many of the game’s cutscenes consist of characters standing in place while the camera slowly pans around them. This is a game made for PS4 that looks like a remastered PS2 classic.

It’s awkward enough to notice, and I couldn’t help wondering how much better Ys IX would’ve been with a shinier coat of paint. Thankfully, the next Trails is confirmed to be using a new engine, so the next Ys will presumably follow suit. 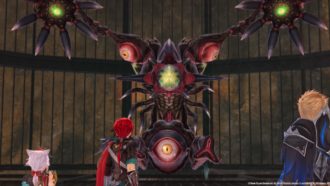 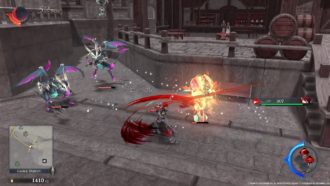 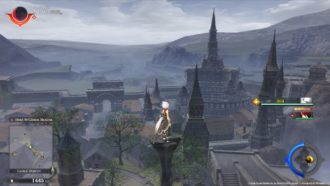 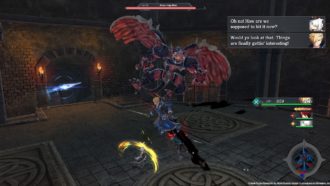 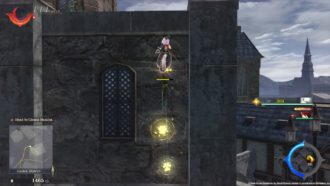 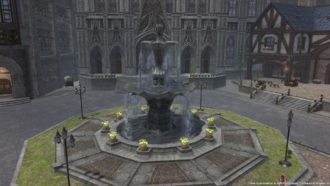 It might be unfair of me to make so many comparisons between Ys VIII and IX, but like I said, I absolutely loved VIII. IX does a lot of things well, but many elements are subpar compared to how its predecessor handled them. Still, the Gift abilities make the city of Balduq a delight to explore, and the tried-and-true battle system is as exhilarating as it ever was. Ys IX: Monstrum Nox is not as polished or as fulfilling as Ys VIII, but second best is nothing to scoff at. This is a fantastic RPG, and an excellent entry in this long running, underappreciated series.