Knockout City shows how a relatively simple premise of throwing dodgeballs at one another can make for a very engaging multiplayer experience. Through its bombastic presentation and “easy-to-lean, hard-to-master” gameplay, Knockout City has really grabbed me so far. Hopefully the developers will continue to add more content down the line to maintain the momentum they have built at launch.

In Knockout City, you and your teammates compete to knock out the opposing team by throwing balls at one another. It’s an online multiplayer-only affair; aside from the training mode, there are no single-player levels or bots to play with. There are 5 main game modes to choose from, although they don’t really change the play experience too much, for the most part.

There is the main 3 vs 3 mode, Team KO, as well as a variant of the 3 vs 3 mode where all the balls have crazy additional properties, and a variant of the 3 vs 3 mode where downed players drop diamonds that need to be collected. The remaining modes do shake things up somewhat, at least. There is Face-Off, a 1 vs 1 mode with a steadily shrinking Battle Royale barrier around the map. The other is Ball Up, a 4 vs 4 mode with no balls, forcing players to roll into ball form and throw their teammates at opponents. Players definitely seem to be gravitating towards the basic Team KO mode, judging by how quickly I found matches.

That said, despite the lack of variety, the solid fundamental gameplay of Knockout City made it always compelling to return to. The basic moveset is fairly simple; you can dash, double-jump and glide to get around, and have three different types of throw. You pick up balls by just running over them, or catching them in mid-air. There are also more advanced tactics, like rolling into a ball and getting your teammates to throw you at the enemy. Even without voice chat, you can request players pass to you or throw you with the simple press of a button. It made pulling off cool and devastating team manoeuvres effortless, whether playing with friends or random players.

The most thrilling moments in my time with Knockout City were the many Mexican stand-offs I would have when running into an opponent. Throwing the ball can be risky, as the other player can always just catch it if they get the timing right.

Will you press the fake throw button to psych them out? Will you have time to intercept their throw with a dash or a catch? Will they throw it directly at you, or will it be thrown in an arc or a curve? Do they have teammates lurking behind a wall to ambush you the moment the balls start flying? I loved that tension of trying to predict how an opposing player would react, and considering all of my options.

The game is enhanced by a variety of special balls at your disposal. These include a bomb ball that explodes, a cage ball that traps opponents in ball form, and a moon ball that lets its holder jump really high. Adding those in the mix, along with various stage hazards in the game’s 5 maps, provided enough modifiers to keep the general dodgeball gameplay feeling fresh.

Doing well at the game provides experience, which dispenses new cosmetic rewards every time you level up. Players can also spend in-game currency on cosmetic options that rotate every few hours. With its list of daily challenges and rotating storefront, fans of free-to-play games like Fortnite will feel right at home, even though Knockout City is not technically free-to-play. Those that spent money on the game may not appreciate these freemium trappings, particularly the Daily Contracts designed to incentivise playing every day.

The game also supports full cross-play and cross-progression across Nintendo Switch, PS4, Xbox One and PC. I found coordinating and playing with friends on other platforms very simple to set up, without any seeming disparity across the platforms. While I spent most of my time with the PS4 version, I dipped my toes into the Switch version as well, which performed fairly admirably considering the power difference between the consoles.

It is the game’s visual and sound design that makes Knockout City feel so addictive. From the explosion of colour after an Ultimate to the satisfying *bonk* of a ball connecting with an opponent, it made the basic moment-to-moment gameplay feel viscerally gratifying.

I do wish the announcer had a greater variety of lines. Considering how many times the two teams will tie during each match, it would be great if the announcer had more than one voice line or intonation for advising that “we’re all tied up!” It got pretty annoying rather quickly. 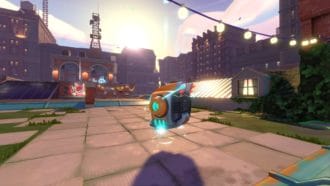 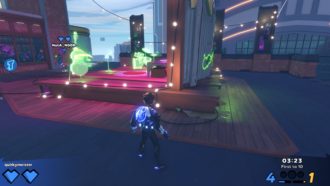 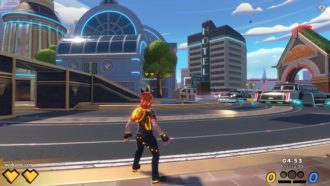 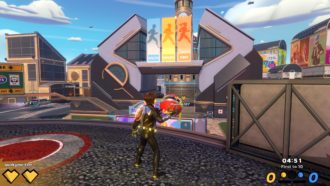 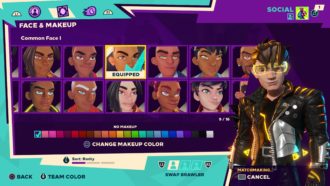 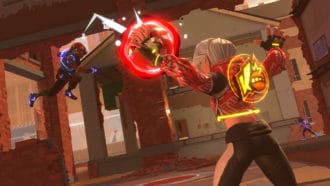 Unfortunately, my experience in Knockout City was impacted somewhat by connectivity issues. Australia’s internet services, being what they are, meant I saw my share of weird glitches, such as players randomly teleporting around the map, laggy responses to my button inputs, and occasionally just being booted from the match. Jarringly, leaving a match prematurely due to connectivity issues is regarded the same as a rage quit, meaning I was punished with being unable to join a match for several hours afterwards. This would be bearable if the game had any kind of offline component. However, considering that it is online-only, it made the game effectively unplayable due to forces outside of my control.

I have played many online multiplayer games in my time, but Knockout City has made a better first impression than most. With its easy-to-understand mechanics, along with the complex mind games involved in almost any interaction, it is very satisfying for quick play sessions. Despite some technical issues and a lack of single-player content and diverse game modes, what is there at launch is a lot of fun so far. Hopefully Velan Studios has more plans to expand the scope of Knockout City further with new maps and cosmetic options over time.