Shin Megami Tensei III: Nocturne is a classic turn-based JRPG that came out 18 years ago in 2003. It paved the way for other games in the genre and, until now, was released only on PS2 and PS3. This classic has now been remastered, available on PS4 and for the first time on PC and Switch, along with a fresh set of English voiceovers.

Playing Shin Megami Tensei III Nocturne HD Remaster was my first foray into the world of SMT, though I’ve always been a Persona fan. I found that though the game is extremely different to Persona, mainly in its darker themes and vibes, you can see where the ideas for certain aspects of the themes and gameplay come from. After spending more time with the game after my initial preview, I was able to really get my teeth into being a demi-fiend and cruise around slaying and becoming mates with all different sorts of demons.

SMT Nocturne, you must be warned, is not a mood-elevating game. It’s complex, it’s dark and it deals with themes, that if you delve into them, will probably make your head hurt. There have been essays written about how the universes of Megaten (the world that encompasses SMT, Persona and all the other Megami Tensei spin-offs) is rooted in the world of philosophy. I’ve found a number of essays discussing the ways that the morals of Megaten connect so perfectly with that of one of the 20th century’s greatest thinkers, Fredrich Nietzsch.

A Nietzsch quote that resonates with the series for me is this: “There are no beautiful surfaces without a terrible depth.” The hero delves into the depths of demons and a mixture of Christianity, Judaism and Hinduism, and also, the player can do their research and delve into the deep world of philosophy… or just enjoy playing as a demi-fiend and not care about all that philosophical stuff at all.

Shin Megami Tensei III Nocturne HD Remaster is all about how you, the hero, navigate a post-apocalyptic Tokyo as a newly turned half-demon. You are the key to the ‘Reason’, a group of beings who believe Tokyo needed to be destroyed and remade in their image. On your journey through the ravaged land of Tokyo, you will meet, befriend and fight a number of colourful demons.

You fight these demons, or win their friendship, when you go into battle. You can try to run away from these random encounters if you have the ability to do so, but if not, you’re stuck battling a number of demons that all want to kill you. These enemies can be the same type or a variety depending on where you are situated. For example, if you’re in Shibuya, demons will be different to when you are in Ginza. There can also be one, or up to six, to battle. Oh and another demon – or demons – may appear once you kill those that are in front of you. Nothing filled me with more dread than when I saw more enemies appear on the screen after my team and I had just gotten a good ol’ beating from the foes we’d only just painstakingly killed.

SMT uses a turn-based battle system which relies on your team exploiting the weaknesses of the enemies in front of you. Some may be weak to wind, so using a wind attack will really impact on their health. However, you need to study these demons using your “Analyse” ability or by having previous knowledge of the enemy’s weaknesses. After each fight you also receive Macca, SMT’s in-game currency and power-ups in the shape of medicinal items and buffs.

Shin Megami Tensei III Nocturne’s gameplay introduced the “Press Turn” battle system which would eventually be used in various forms in future SMT and Persona titles. With the system, if you exploit an enemies weak spot by way of a critical hit, you could be rewarded with an additional half turn. This is indicated by the mermaid/dragon looking icons on the top right side of the battle screen. 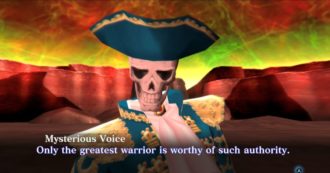 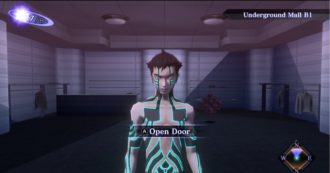 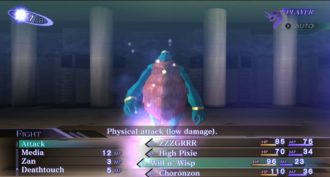 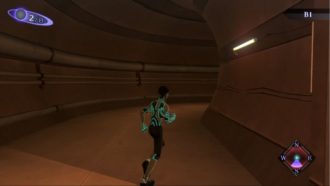 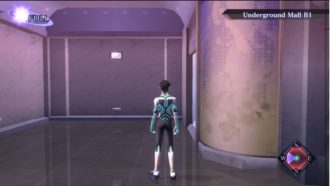 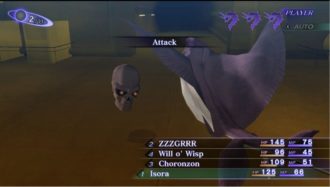 “On your journey through the ravaged land of Tokyo, you will meet, befriend and fight a number of colourful demons.”

You’ll spend a lot of time in random encounters which can be a bit annoying, especially when you are focused on getting your party to a particular location full of MP. MP is extremely hard to come by; you can only really refuel it by talking to the Lady of the Fount, a floating female cross-legged figure who has Cate Blanchett from Lord of the Rings vibes. For a bit of Macca, she will refill you and your party’s MP, but she’s only in certain locations on the map. MP refills are available, but they are pricey and only target one character at a time. Considering the way I suddenly and continuously found myself in battle, the inconsistency made me roll my eyes in frustration.

The cult-hit title has also had a fresh coat of paint by way of remastered 3D models and backgrounds, but it is nowhere near as colourful as JRPGs from the past decade. For instance, Persona 5 is so full of things to do and see; each dungeon is covered in elements of the looming boss that you are working up to destroying. In SMT III, walls and corridors can look so similar that I found myself going around in circles and getting lost amongst the dark shades and bare features of the environment. Compared to what came after it, SMT III looks pretty boring stylistically in comparison.

Also, the world itself is quite bare. To navigate around the world map you are literally a circle and upside-down triangle game piece with the map being 3D and top down in art style. Its dark, gloomy vibe with its unmemorable world may not be too welcoming to those who are fans of more modern JRPG examples.

SMT III is also quite complex, but doesn’t delve into the intricate elements of the game, such as the constantly changing Kagutsuchi counter that is ever present on the top left hand side of the home screen. Apparently, this is to do with the moon and how its fullness will impact some character’s skills. There are many other elements that the game doesn’t fully explain that would have enhanced my playthrough earlier if I had known about them. For example, Magatama is an element that when ingested, makes the hero more powerful but also more demon. I had no idea there were 25 different Magatama that my hero could ingest that would increase their power in the three elements – light, neutral and dark. Also, demons that you befriend are also categorised this way, though the game doesn’t make clear why or what significance each element has. I only found out this information when doing some research on how to defeat a certain tricky boss.

There are quite a few elements of SMT Nocturne that I haven’t discussed, such as fusions, where you are able to combine demons to make stronger, faster demon combos, and the use of gems in Rag’s Jewellery shop where you can trade stones for special power-ups. I wasn’t joking when I said that this world is mighty complex. Despite this, I still enjoyed my stay there, even if it felt a bit samey and lacklustre at times.

Shin Megami Tensei III Nocturne HD Remaster is an extremely important game that paved the way for the Persona series and other turn-based JRPGs. For that reason, it’s important that we give it credit where credit is due; without it and the SMT franchise as a whole, the genre would look mighty different. Though running around in circles and fighting battle after battle with samey demons can be more yawn than yay, Shin Megami Tensei III Nocturne is a classic that anyone who values the genre should check out, even if it’s merely to delve into the roots of this complicated, intriguing universe.