Many moons ago, before the rise of popularity of a little game called Persona 5, Shin Megami Tensei (SMT) reigned as the JRPG of choice for many lovers of JRPG’s. Actually, without SMT there would not even be a Persona series to begin with. We were very lucky to get our hands on a preview of the classic Shin Megami Tensei III Nocturne HD Remaster to try out; here are our initial thoughts of the first few hours.

The story of SMT starts back in 1987 when the first game in the series, Digital Devil Story: Megami Tensei was released for the Super Famicon. It was based on sci fi novels by Japanese author Aya Nishitani and included turn based gameplay in dungeons between humans and demons. The launch and success of this title would lead to a number of spin-off all connected to the Shin Megami Tensei universe, including Persona. Actually, Persona only dropped the “Shin Megami Tensei” from their title with the release of Persona 4.

The first thing you need to know about this title is that its storyline is deliciously intricate. This is what made it such a loved game when it was first released on the PS2 in 2003. Games that deal with the dark, occultist themes that Shin Megami Tensei III do obviously have a lot of faith in the intelligence of the player; yeah, it’s nice to get your hand held every now and again, but also, it’s nice to be treated like a capable adult. Not only are demons based on actual mythological beings, but you are given the power to change the nature of the game due to the alliances you side with. All these demons, and the way you fight them, were created to symbolise the way we can only face our challenges once we are in touch with our own strengths and weaknesses. Yeah. SMT is deep.

Though the majority of your time will be spent in a post apocalyptic Tokyo, the narrative of SMT III begins just before the city is destroyed in an event called the Conception. The way the game leads up to this event is interesting as it provides a juxtaposition between the “normal” and demonic versions of Tokyo.

Your hero receives a front row seat to the destruction of Tokyo when they meet up with their teacher at the games first major location, the Medical Center. This teacher, who speaks in apocalyptic riddles (lets be honest, every character in SMT Nocturne does) gives you the low down on the need for Tokyo to be destroyed. Once you see the city disintegrate, you black out, only to wake up in front of two even shadier characters, a nanny and a blonde haired boy. The nanny speaks for her charge telling you that he has high hopes for you and therefore grants you with the powers of a demi-fiend. Now you and Tokyo have transformed, the real fun begins…. 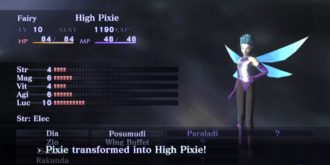 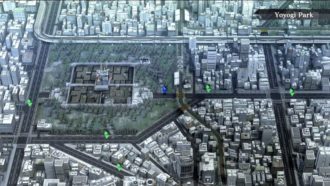 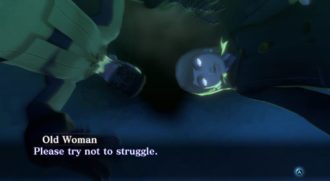 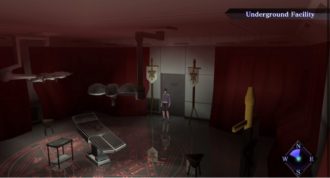 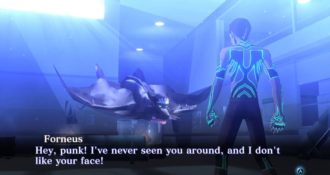 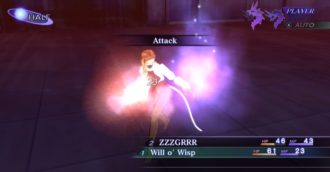 Firstly, your Hero is now running around, shirtless, with his power literally pulsating from him. He now has some pretty killer body art that looks like he’s been tattooed with a neon motherboard as inspiration. With this new body and new skills your Hero is ready to whip some demon butt!

Gameplay sees you battling up to four demons; SMT Nocturne III birthed the “Once More” mechanic which lets you know and learn your enemies weaknesses and use these to your advantage. Not every demon will want to fight against you however; some will want to have a chat and fight by your side. You may have to sweet talk them or give them a present such as medicine to entice them to come over to the lighter side. You and your demon buds level up by receiving XP by fighting other demons. You can choose where your skill points go from a list of attributes such as Strength, Agility and Vitality. However, you cannot do so for other members in your party. You and your team will also learn new skills as you progress.

Even though SMT III has had its 3D models and background completely remastered in HD it still looks like a 18 year old game that has been polished. This comes down to how blank the environments in the game can be. Walls are bare, colours are dark, rooms are pretty much empty. However, there is still a charm to this title that cannot be ignored. It may be how it delivers up some pretty unique, intense demons, it may be the stoic nature of the Hero or it may just be its undeniable place in video game history. I think it’s a good combo of all three, along with characters being voiced in English for the first time ever. For those who have played an SMT or affiliated games before know, it can be hard so if you want to have a lighter gaming experience Sega and Atlas have created a Merciful mode that you will be able to download via a free DLC. There will also be a “suspend save” feature in case you don’t have time to run all the way back to a save room.

Playing this preview has given me an appreciation for how involved and intelligent the world of this title is and has made me excited to dive even deeper into Nocturne. For those who haven’t experienced this classic and love intricate worlds with JRPG sensibilities, this is a game you certainly need to have on your radar.

Shin Megami Tensei III Nocturne hits stores on pre-order early access on the 21st of May 2021 with a full release on the 25th of May 2021 for Steam, Nintendo Switch and PS4.