Persona 5 Strikers Review – Fought it out in the debris

Persona 5 Strikers is the confluence of two separate developers who love to experiment with their own work. Atlus will release a 100-hour turn-based Persona game, then put out a music game or 1-on-1 fighting game as canonical sequels. Omega Force is best known for the Dynasty Warriors series. Lately they’ve also been making a bit of a splash with the Hyrule Warriors games, mapping their trademark 1-vs-500 action gameplay onto The Legend of Zelda. It makes perfect sense, then, that these two studios would come together to make something new out of something old. Strikers, if you couldn’t tell where this was going, takes the measured, strategic gameplay of Persona 5 and translates it to a button-mashing hack-and-slash game. And here’s the weird part: it’s not bad.

I already covered the game’s first chapter in my preview last month, but here’s a quick summary: six months after the end of Persona 5, the gang reunites during their Summer break to find a new danger threatening the world around them. They must once again enter the Metaverse, a parallel dimension formed from the unconscious thoughts of society. Like the original game, Persona 5 Strikers lets you pop in and out of the Metaverse at will, but there’s no longer any penalty for doing so. The original game’s calendar and social systems are gone, with time only passing once you have met every story objective. After finishing the game, I’m glad the time management elements of P5 didn’t cross over to Strikers. With over 50 hours of gameplay (on Normal difficulty, at least), there’s plenty in here to sink your teeth into.

Each of the game’s chapters (usually) consists of two parts: the Metaverse contains a (usually) massive dungeon full of enemies, puzzles, platforming segments, and an epic boss at the end. But when you’re not in the Metaverse, you’re in the real world, walking around a different Japanese locale, talking to people, shopping for items, and…very little else. But let’s talk about the dungeons, known as Jails in-game.

Jails are huge! With each one (usually) having you explore the Metaverse equivalent of multiple city blocks, they are easily what you will spend most of your time doing in Strikers, and you’re better off for it. The level and puzzle design is (usually) creative throughout and provides enough of a break from the hectic fights.

Combat is intense. In my preview I mentioned how overwhelming it all is at the start, with Persona’s classic elemental weaknesses and strengths being a lot to keep track of in real time, on top of each party member having a unique playstyle and combo system. But the more I played the game, the more that stuff became second nature. In true Omega Force fashion, it’s (usually) a blast shearing through hundreds of enemies, many of whom are much bigger than our teen heroes.

A big part of making a turn-based combat system work in real time is the game’s copious use of button prompts. After hitting an enemy with their weakness enough times, a prompt will come up to trigger an All-Out Attack, dealing huge damage to the target enemy and those around them. And since party members attack of their own volition, you’ll often get prompted for an All-Out Attack when you won’t know where it came from. And new to Persona 5 Strikers is environmental attacks, called Phantom Dashes. If you’re nearby, say, a chandelier on the ceiling or a conveniently-placed cannon on the ground, you will be prompted to zip over to it and drop/shoot it onto/at any enemies in its radius. Party members will occasionally prompt you to use a specific ability, which will switch control over to them. There’s a lot of systems popping off at all times, and ensure that every battle is a visual feast. And I’m talking the messy coming-home-after-a-bucks-night kind of feast. I looked forward to every one.

“…every battle is a visual feast. And I’m talking the messy coming-home-after-a-bucks-night kind of feast.”

Outside the Metaverse is a much more relaxing vibe. Setting the story up as a cross-country road trip was an excellent choice. Since each chapter is set in a different photogenic part of Japan, I found myself getting some virtual tourism in as I ran around and took in the sights. Aside from replenishing all your health and stamina, the real world also serves as a place to take on new sidequests and go shopping. By removing the time management elements of Persona 5, Strikers takes some of the hidden gems of the original game’s story and smartly gives them a bigger spotlight, which is to say, the gang just gets to hang out a lot more now that they don’t have to worry about school. And during these hangouts we get a lot of the anime cutscenes the Persona series is known for. These are, as expected, beautifully drawn and animated, and (usually) portray the characters in a loveable light. 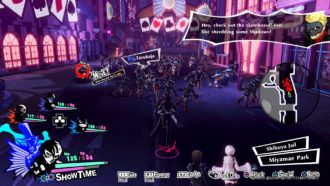 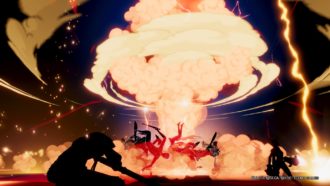 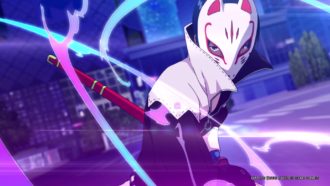 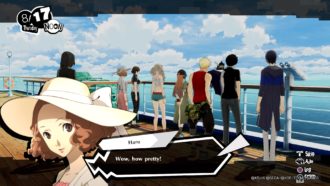 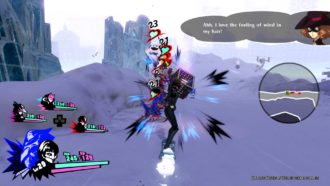 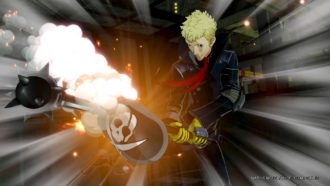 You may have noticed my liberal use of (usually) throughout the last few paragraphs. That’s because, as much as Persona 5 Strikers does well, there’s a few things it doesn’t handle perfectly.

One of the biggest issues comes in the game’s shops. There’s too many of them. There’s upwards of 20 or more in a single real-world area, each selling unique healing items for use in battle. For some reason, you can only buy a handful of each item before they sell out, but they go back in stock after you spend enough time in a Jail. That means, between every Jail session, you’re running around buying items from every single shop. It’s a tedious process.

Items with similar effects will often have unique names, which heavily clogs up your inventory. Every item has a near-identical icon, so every time a character got knocked out, I had to sift through all my items to find the revival stuff. Opening the time menu freezes time, but since this isn’t a turn-based game, searching through your items can often kill the momentum of gameplay. Strikers got a lot of things right translating Persona 5’s many mechanics. But they didn’t just copy Persona 5’s inventory bloat, they made it worse. Having too many shops may seem like a minor gripe, but it’s noticeable since there’s very little else to do in the real world.

And that’s not the only area where Strikers carries over some of Persona’s unfavourable aspects. The anime cutscenes, while gorgeous, continue to feature the male gaze to an uncomfortable degree, with yet more close-ups of a female character’s breasts while being ogled by the male characters. And continuing Persona’s trend of portraying marginalised people as evil, one particular boss is portrayed as overweight just to emphasise how bad they are. It’s gross, and shows that, while Atlus is listening to fan feedback, they still have a long, long way to go in how they portray certain social issues. Which is a shame, since Persona is ostensibly a series about tackling social issues.

Something else to note is how inconsistent the game’s second half is. While the first several chapters maintain the explorable real-world area + large multi-level dungeon formula, some of the later chapters aren’t able to keep up. Some dungeons are a fraction of the size of the others, and won’t let you explore the real world. One major NPC, in particular, doesn’t seem to have a character model, only appearing over the phone or from just off-camera. The game feels rushed the closer you get towards the end. This didn’t fully detract from my time with Persona 5 Strikers – and JRPGs are known for having final acts be scant on gameplay due to development pressures – but it was still hard to ignore.

But one aspect of Persona 5 Strikers that they clearly did not skimp on is the game’s excellent soundtrack. It’s outstanding. Lyn Inaizumi returns to provide the vocals for many of the game’s new tracks, and also for remixes of songs from the original game. The music is a constant, unending delight, and the soundtrack can easily take a spot as one of the best in the series.

After having played Persona 5, and last year’s updated Persona 5 Royal, Persona 5 Strikers was like slipping into a warm pair of fluffy slippers. It brings back these characters I’ve spent hundreds of hours with, and gives them a nice little side story, if not a full-fledged sequel. Much like the other spinoffs, you might not enjoy the game if you aren’t familiar with the world of Persona 5, but for those who are, you’re going to have a lot of fun. There’s quite a few drawbacks, but Omega Force and Atlus have successfully converted Persona 5’s gameplay into a whole new genre, warts and all. I’m curious to see what either studio does next.