Hyrule Warriors: Age of Calamity Review – Smash through the Calamity

The success of the first Hyrule Warriors game, released in 2014 on the WiiU, was somewhat unexpected. It was a completely different genre than the series standard, and seemed to be a celebration of the Legend of Zelda series as a whole. It was a game for the fans, and not only did it succeed as a loving tribute, but it was also a damn fine game. I don’t want to think about how many hours total I have put into the original WiiU title, its updated 3DS port Hyrule Warriors: Legends, and the Definitive Edition that released for Nintendo Switch in 2018. To this day, I have not completed even close to all the content it has to offer.

Hyrule Warriors: Age of Calamity offers yet more content, new characters, and the story of Hyrule just before it fell to the forces of Calamity Ganon. Going in, I expected to be more invested in the story than the gameplay, given that I was already a Hyrule Warrior veteran, but it ended up being the other way around.

It’s impossible not to compare Age of Calamity to Hyrule Warriors: Definitive Edition, which is the latest and greatest version of the original WiiU game. But this is not just Hyrule Warriors 2; all you have to do is turn the game on to see the difference.

The game’s main storyline follows Hyrule’s battle against Calamity Ganon’s forces, plus the events leading up to it. As it’s primarily a military struggle, it’s a perfect candidate for some Warriors-style action. Each playable character has a unique set of attacks, all of them flashy and charismatic. There is enough variety among the play styles to suit most players.

The Champions of Hyrule – Mipha, Revali, Urbossa, and Daruk – along with Link, Zelda, and Impa all take centre stage in the story, which sheds light on what occurred during that fateful battle. I was curious to find out how they would handle this, as we already know from Breath of the Wild that each of the champions eventually dies in battle. What happened next was not what I expected to say the least, and unfortunately, I don’t mean in the good sense. While I did generally enjoy the story, it leaves several things unexplained that do more to frustrate than intrigue.

“A perfect candidate for some Warriors-style action.”

Nobody plays a Warriors game for the plot, though, and in that aspect Age of Calamity holds up very well. A silly story is easily forgotten in when you’re racing across the battlefield laying waste to hundreds of enemies while collecting loot. It never gets old, even with countless optional missions on the side.

Age of Calamity doesn’t change the core gameplay, which is good – if it ain’t broke, don’t fix it. The action is as fast and satisfying as ever. But there are some changes: ones that work to both fix some old annoyances, and make the battles feel a little more Breath of the Wild. 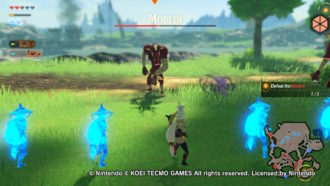 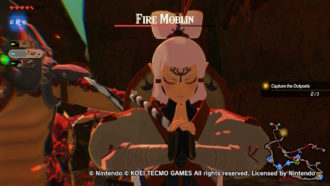 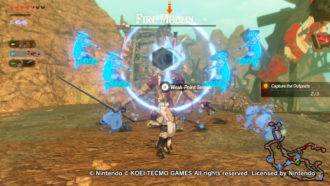 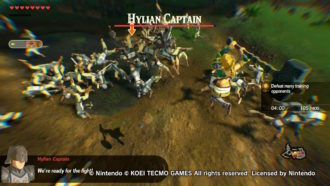 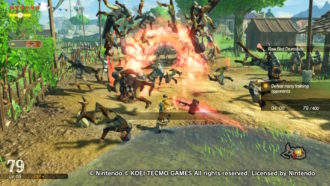 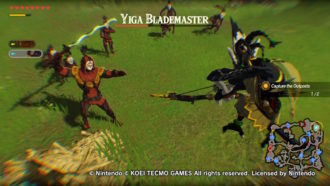 The original game gave the player a nigh-unmanageable pool of items such as bombs and arrows, which were annoying to switch between and were only useful when fighting giant bosses. Age of Calamity replaces this with a system that is far easier to use: Sheikah Runes. Like items, they are used to expose the weak points of enemies so they’re easier to kill, but as there’s only four of them, it’s less of a chore. Another sweet addition is elemental attacks that every character can use; depending on the environment of the battlefield or the type of enemy, a hit with an elemental attack can do massive damage. It puts more control in the players’ hands when facing off against multiple enemies.

There is one big problem though, and that’s the lag. It’s disappointing to see, especially since Hyrule Warriors: Definitive Edition runs so smoothly. All it takes is an attack with a lot of particle effects, or too many enemies on screen, for the game to start noticeably dropping frames. Co-op play is even worse, so much so that I wouldn’t even say it’s worth trying. The draw distance for details on the ground such as rocks and grass is pretty low too. The graphical style is gorgeous just like Breath of the Wild, but it seems that they’ve chosen that over technical performance – which, in a hack-and-slash game, is the wrong choice. It isn’t a deal-breaker, but it sure puts a damper on the busier stages.

Instead of being separated by different play modes and a shop to purchase new upgrades and abilities, it’s all laid out on the iconic Breath of the Wild map. Both the main campaign and the optional missions will take you all over the place, and battle stages will be easily recognisable as a match for the in-game location. It seems obvious, but it’s a genuine joy to realise you’re fighting a battle in an area you remember exploring in Breath of the Wild.

Even unlocking new abilities and extra hearts is done through the map, each one accompanied by some cute flavour text. It adds a lot of personality to the upgrading process, which is definitely more engaging than simply purchasing the upgrades from a bazaar. The downside is that the map will soon become drowned in icons, making it more of a core to find the upgrade you’re looking for. 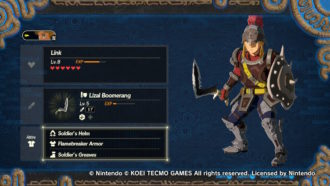 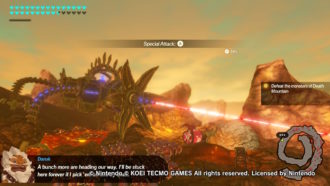 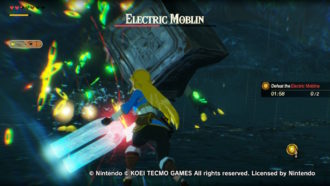 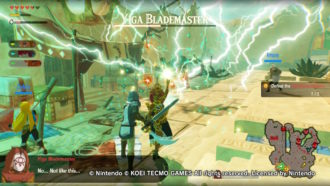 Despite how different it succeeds in being, I cannot help but compare it to the Definitive Edition on the Switch. With the benefit of around 4 years of extra development time for gameplay improvements, new features, and DLC, The Definitive Edition of Hyrule Warriors is a near-perfected game. Perhaps it isn’t fair to hold Age of Calamity to that standard, but as it’s appealing to the same demographic, there’s no way around it: Age of Calamity just doesn’t win out.

Besides the lag and the lacklustre story, the devil is really in the details. There aren’t as many cool costumes, weapons, and other collectables as the previous game, making for less incentive to play the optional levels. Breath of the Wild’s muted colour palette, which is so beautiful in the main title, doesn’t work as well for this busy hack-and-slash game. My hope is that this game will see some patches, updates, and DLC so in

Despite the fact that it doesn’t topple Definitive Edition’s throne, Age of Calamity is still a good game worth playing. It does things differently enough to avoid looking like a copy of the original, while still staying true to the heart of what makes the Warriors series so fun. I loved actually getting a chance to get to know the Champions and Princess Zelda, and makes me fascinated to know how they will continue the story in the upcoming Breath of the Wild sequel.