Educational games have been thoroughly out of style since the early 2000s, which I have always thought to be a crying shame. They’re useful learning tools even for adults, which is why it’s so great to see a game like Game Builder Garage. This game developing program by Nintendo is seemingly a way to get more people thinking like a video game designer, using its trademark charisma and style to keep the infamously frustrating task of programming enjoyable. And while it succeeds on that front, there are some major flaws here that threaten its lastability.

Game Builder Garage features seven interactable tutorials for some basic genres of games you can make. These tutorials can each take 30 minutes to over an hour to complete, so it’s impressive that the game manages to avoid feeling like a chore. Each tutorial drip-feeds you information slowly enough for it to sink in, but it soon ramps up in complexity and you may need to read up on the game’s in-built encyclopedia for assistance. It’s all explained quite clearly, so you won’t remain confounded for too long.

Each function of your game, whether that be a game object, a button press, or something behind the scenes like a flag or counter, is accompanied by a cute face and a personality. These are called Nodons, and they’re the champions making your game run. These make it easier to remember each of the dozens of functions and what they do, and it’s a classic Nintendo trick to put faces on everything. Depending on how busy your programming screen gets, they may start to make everything look messy though.

I found myself constantly impressed with each function that is introduced, functions that I never would have thought to include but seem obvious in retrospect. But to be quite clear, this is not a development tool on the same scale as Dreams. This is more on the level of some of the older versions of GameMaker, a series of programs I remember being available on my school’s computers back in 2010. Someone particularly invested and with a lot of time will be able to make something amazing, but for the most part, anything coming out of Game Builder Garage will likely be limited.

Since this is essentially a curated assembly of pre-prepared game-making tools, limitations should be expected. Some limitation can even be good, especially if the game is aiming for accessibility. It explains the core basics of programming in a very easy-to-follow way, and I believe Game Builder Garage has the power to encourage younger aspirational game developers to follow their dreams. There is a certain kind of creativity that can even flourish from being limited, and I hope that I’ll begin to see some surprising masterpieces come out of the woodwork. I just think that those hoping for something more involved may find themselves disappointed.

That being said, there are some limitations that detract from the experience: namely, the visual options. All the freedom in the world doesn’t mean much if you can’t make the game look the way you want, and in this regard Game Builder Garage really could have done better. There are no 3D modelling options, so your game objects are limited to a box, sphere, or cylinder (or whatever you can assemble using a combination of the three). Your player character options are also limited to a person, car, or spaceship. Ways to change how these models look are severely lacking, as are ways you customise their textures. Textures apply to the entire object no matter what and are limited to what you can draw on a 64×64 pixel grid using your touchscreen, which is fiddly and often frustrating. 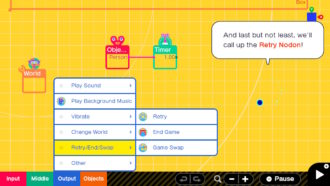 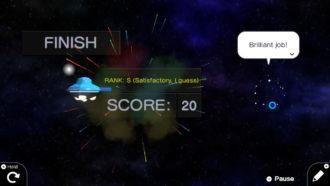 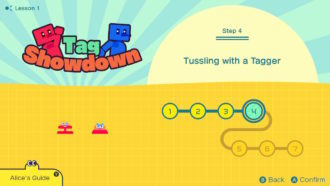 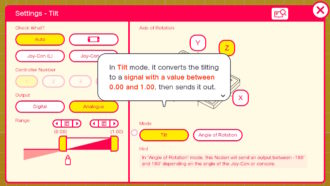 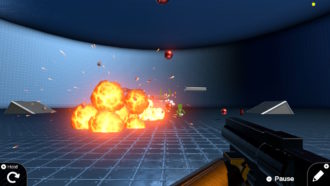 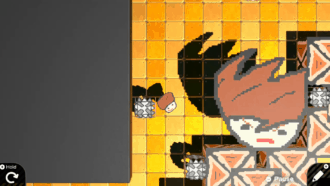 After you finish tinkering around with your own games, you might feel inclined to go searching for games other players have made. Here’s where you’d expect to find an option where you can hop online and browse for other games. Problem: Game Builder Garage does not have a browsing function, at all. To download games from the community, you must already know the game or creator code and type it into the system.

Nintendo has never been the best when it comes to online functions. Online play can be laggy even on the fastest of internet speeds, and when it comes to sharing content to a game community, the online searches can be limited and clunky. But for Game Builder Garage to have no search functions whatsoever is beyond the pale, and if anything is going to kill this game dead within its launch month it’ll be this. I had to search through social media to find creators who had thought to upload their games, when common sense says that I should have only had to browse through a list of search results that be could be sorted by a range of filters. Super Mario Maker and its sequel had a search function like that, so it boggles the mind as to why Nintendo did not do the same here. If I had to guess, I’d say it was a good excuse to avoid having to moderate the content players upload, but at what cost? Super Mario Maker’s browsing system worked so well in part because players respond to being able to easily share their work and show appreciation for the work of others.

And it’s a real shame, because already there are examples of cool creations from the community that risk never being discovered. On the left is a screenshot from a recreation of Doom created by Twitter user Mr Tiffles; one of the few games that are easy to find by virtue of the fact that it’s been reported on by multiple outlets.

I can’t imagine how many more I’m missing out on because it didn’t show up in my search or because the creator simply did not bother to post it on social media. We should be seeing a flood of budding developers sharing their creations as if it were their Animal Crossing town, but instead, I’m only seeing the same handful of games get shared around by those invested enough to do so.

Game Builder Garage makes programming fun, with easy-to-follow tutorials and plenty of in-game resources to help you if you get lost. It’s easy on the eyes too, although a lack of visual customisation options was disappointing to see. With so many things it does right, it’s astounding that Nintendo would shoot themselves in their own foot so badly by not including any in-game search function. It may find an audience with some budding game designers, but it’s unlikely to become the phenomenon it could have been.