Quickly proving they are one of the most consistent AAA game studios in the industry is Insomniac Games, known most recently for the PlayStation exclusive Marvel’s Spider-Man games and now for the interdimensional adventure, Ratchet & Clank: Rift Apart. Releasing as a PS5 exclusive and taking full advantage of the new system’s power, Rift Apart showcases a breathtakingly dense and vibrant world as players hop between dimensions as their favourite alien/robot duo.

Ratchet & Clank: Rift Apart has the tricky task of bringing a classic and beloved franchise that started its life on the PS2 into the modern era. With the help of new characters Rivet & Kit and a healthy dose of nostalgia, the game largely succeeds, creating an engaging and dynamic adventure from start to finish.

Ratchet & Clank: Rift Apart is a 3D platformer/action game that combines third-person shooting with hack and slash combat. The game is a mostly linear affair with our heroes taking off on a quest that’ll see them battling waves and waves of foes with a huge arsenal of weapons at their disposal. The dynamic gameplay of Rift Apart is definitely one of its biggest assets. Your adventure starts with just your OmniWrench and Blast Pistol, but pretty soon you’ll be accumulating enough resources to buy yourself a huge array of firepower to eliminate the various gronks and goons who stand in your way. The Shatterbomb lets you lob grenades into the middle of your foes exploding on impact, Mr. Fungi is your personal attack mushroom friend, and weapons like the Lightning Rod and Buzz Blades will ensure a healthy dose of consistent damage is inflicted upon enemies.

The amount of variety found in the weaponry allows the combat to be really engaging and frenetic. Limited ammunition means you’ll constantly be pulling up your weapon wheel(s) mid-combat and picking from one of MANY various weapons to help you get the job done. The constant rotation of combat tools ensures there’s never a dull moment to be found, with melee attacks, jumps and dodges assisting your assault and survival. I love when a game forces you to rotate through your arsenal because it keeps things fresh and stops you from falling into a routine. You’re rewarded for it too, because weapons level up through use which allows you to spend resources to enhance them fairly considerably. The Warmonger allows you to unleash rockets upon your foes, but once upgraded, those explosions turn into fireworks as mini rockets bloom from the initial impact. There’s always a new weapon to work towards and new upgrades to unlock and it’s always an absolute joy.

Variety isn’t just found in combat either. The game will bounce you between moments of gunfights, platforming, high-speed rides and grinds, puzzles, cinematics and hacking minigames. It’s a superbly paced experience and the diversity is very much appreciated. When people complain that a game’s gameplay loop gets repetitive, they’re describing the exact opposite experience of Rift Apart.

Narratively the game finds a way to change things up too. The introduction of multiple dimensions and the rifts connecting them is impressive technically speaking, as the duo instantly warp from one world to the next with nary a loading screen in sight. These dimensions hold narrative importance, facilitating the introduction of a whole lot of new faces to the series. Doctor Nefarious is back and he’s causing chaos once again as rifts open up all around the world and foes from multiple dimensions show up to try and take you down.

Your journey will take you through two primary dimensions, your own as well as a dimension containing a much more competent Nefarious. This second dimension is also home to Ratchet & Clanks counterparts, Rivet & Kit, as well as many other familiar-yet-dimensionally-different doppelgangers. I love these new characters. Not only is every single one of them joyfully animated, full of life, fully realised and well-acted, but they also allow a level of diversity not typically associated with mascot franchises that started their life back in 2002. You’ll even spend half the game playing as Rivet, who, despite being a fresh face, is as lovable and as deserving a lead as our beloved Ratchet. 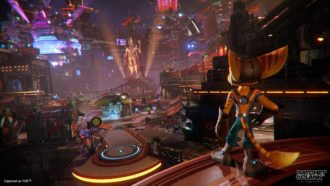 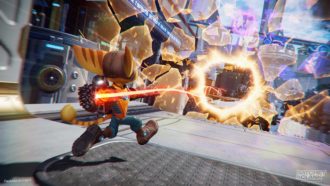 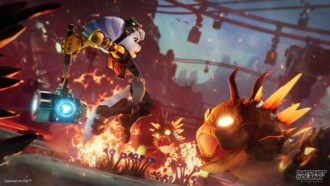 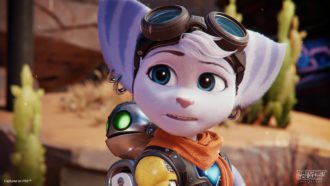 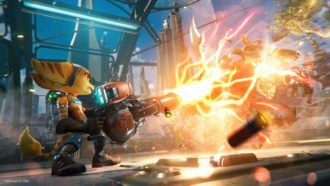 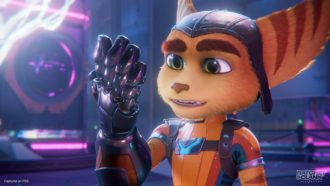 Ratchet & Clank as a series has a rich history to build from, but a history that undeniably started when video game narratives were somewhat simpler. The overarching story and characters, whilst enjoyable, are shoehorned into the corny and kid-friendly tropes you’d expect. This isn’t necessarily a bad thing, kids do play video games after all, but don’t go in expecting depth, nuance or surprising storytelling. Some of the biggest kid-movie tropes will be present from moment one and the twists and turns are as predictable as they come. With that said, there’s no denying the joy the game can bring, and those thickly layered tropes will feel like a warm nostalgic blanket for fans of the franchise who started playing it at a more age-appropriate time.

Speaking of kid-friendly, on the normal difficulty setting, Ratchet & Clank: Rift Apart also feels like an absolute cakewalk. Bearing a slight spike in the final moments of the game, Rift Apart won’t likely challenge players who have played experiences like this one before. Adjusting the difficulty setting does help with combat, but there’s nothing that can be done to make the game’s puzzling or platforming any harder. The game just has an easy air about it that left me feeling unchallenged. Hesitate for more than 5 seconds on a puzzle and a character will drop a hint to nudge you in the right direction. Spend a little longer than 5 seconds because, I don’t know, maybe you just want to look around a bit, and you’ll hear that same hint verbally announced over and over again. It’s all just a little too hand-holdy for my personal tastes.

Visually speaking the game is stunning. It takes full advantage of the PS5 hardware and you can instantly see the payoff. Your introduction to Rift Apart is one that’s full of vibrancy, life and colour and it all pops off the screen with immaculate detail. The density of the world around you is inspiring and the little details you see are simply superb. Sometimes I just catch myself starring at Ratchet or Rivet’s fur up close and appreciating the detail and movement in those individual strands.

The game continues to showcase that same beauty throughout as you hop between worlds and dimensions and take in the variety in sights and sounds. The scope and fidelity of modern gaming never ceases to amaze me and, to be perfectly frank, it’s often these PlayStation studios who continue to push the envelope. Having said that, I did uncover a few moments that showed Rift Apart was somewhat rough around the edges with an opportunity for just another coat of polish to perfect the experience. Small glitches ranged from innocuous enough occurrences such as ragdolling corpses getting stuck in walls to more tedious problems like an inability to preview weapons at one point without it completely freezing the game (but thankfully not the console). I also occasionally found myself trying to jump to what appeared to be an easy to reach platform only to find myself hitting an invisible wall. Dialogue also cut off mid-sentence very frequently as I progressed through the world, unaware that I was apparently moving too fast for the narrative to keep up. It’s small touches like this that hold the game back, but nothing ever felt egregious.

“The scope and fidelity of modern gaming never ceases to amaze me and… it’s often these PlayStation studios who continue to push the envelope.”

Rift Apart is a game that feels very good to complete. Collectables are never annoying and often have tangible impacts on the gameplay or visuals, including one badass weapon that isn’t the easiest to unlock. The game also does a very good job of telegraphing those collectables and bonuses and facilitates travel and completion once credits roll so that players can tap into that completionist within them and go for the 100%. I don’t often attempt a 100% completion with games, but with Rift Apart I’m extremely tempted just because of how fun the general gameplay loop and traversal is.

Some of the bonus content feels a bit like padding, such as the arena you’ll return to on occasion. Although, for the most part, Ratchet & Clank: Rift Apart’s world and gameplay is just so engaging and varied. For fans of the franchise or newcomers alike, this is one release that’ll no doubt get people excited.

Ratchet & Clank: Rift Apart is another action adventure triumph for PlayStation and Insomniac Games. It’s got a world that’s so full of colour and life, lovable new characters who bring clever diversity to a well-established cast, and an ever-changing gameplay loop that’s downright fun and engaging. Even if the game panders a little too heavily to a younger audience for my taste, it still excels in enough areas to make this an easy recommendation for nostalgic fans and newcomers alike.