The themes in Retro Machina may have felt far fetched years ago, but now in the years of Covid, and especially with Melbourne locked down again, the idea of a desolate city where only robots remain seems not so hard to imagine.

In this action-adventure indie puzzler, you play as a little robot that looks like a mixture of Clank from Rachet & Clank and a 1950s toy straight from my Baby Boomer dad’s collection. When you meet this little nameless protagonist, you observe him malfunctioning via a cut scene which leads him to somehow become conscious of his surroundings and able to explore the world he finds himself in.

This world is very influenced by retro 1950s science fiction reminiscent of Fallout and Bioshock. However, unlike those games, Retro Machina doesn’t delve deep into the themes of dystopia, possibly due to the lack of humans. Instead, it presents a world that is not only stunningly beautiful but calming in its depictions of a world void of human life. The atmosphere is created by the soft piano music soundtrack and also its colour palette, which uses faded tones for the buildings and environments that make up the majority of the landscape of the game. The vibrancy comes from the robots themselves, possibly symbolising the death of those that used to live within these structures and the “life” that still vibrates out of the machines that wander amongst them.

Your adventure in this 50s retro-verse begins at a central station, which is a computer that links three doors that lead to three different maps. When you explore these maps, your aim is to unlock as many areas of the map as possible, solving environmental puzzles to find keys and floppy discs (remember those bad boys?!) that, when inserted, lead you deeper into the city and its tragic history.

The first area you will traverse through is Atomic City, a metropolis that obviously saw warfare. Scattered around are massive decomposing robot bodies, abandoned futuristic vehicles and ripped apart burger joints. Signs advertise a future of enterprise and promise, beautifully juxtaposing the derelict landscape the robots inhabit. 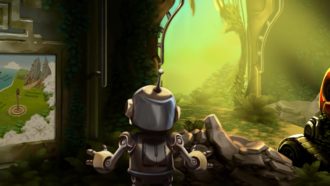 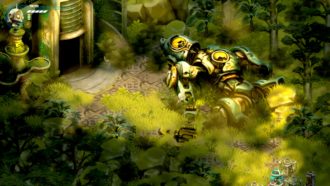 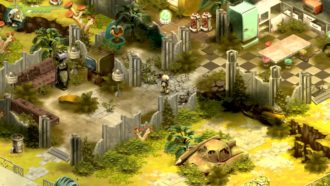 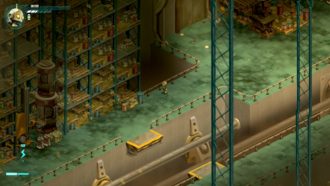 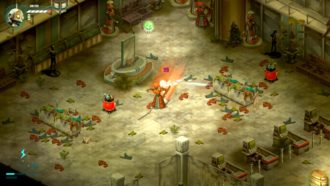 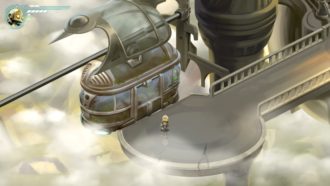 “Signs advertise a future of enterprise and promise, beautifully juxtaposing the derelict landscape the robots inhabit”

There’s no doubt about it – the robots are the masters of this world. The scope and imagination behind the robots you encounter gives an insight into the ways these robots, and the world they live in, evolved. For example, the Throwbot, once “created to deliver newspapers”, became a device that threw bombs instead. The scary Slashermatic was once used to cook up burgers and sausages but now “slices up its enemies using a katana.” You, as the little robot that could, can either fight these robots or control them through your inbuilt control beam and use their attacks to survive the attacks of the other robots around you.

One of the frustrating elements of Retro Machina’s gameplay is that when a number of robots are around you, it’s hard to select, via your robot’s beam, the robot you want to control. Many times I would direct my beam towards a certain robot only to have it connect to another lesser powerful machine. This meant that I was attacked by the badass robot I wanted to control and would lose quite a bit of health in the process. It’s not a “throw-the-controller-at-the-TV” type frustration, but frustrating nonetheless.

When the ability does work, you can control robots such as the Bugtron that is reminiscent of the Spiderbot from the Watchdog series. It can get into areas you cannot and press panels that open locked doors. Or the Pogotron, which looks like a flying saucer and when activated brings out a circular saw. Of course, you can always dash around and beat these robots with your wrench in hand, but it is way more fun to spice up your life and control machines that have superior weapons and abilities.

Other than your wrench, you can obtain further attack modes and upgrade your abilities via Craftronic Machines. Attacks such as a pulsing electric attack and a spinning-with-your-wrench attack don’t seem to do too much to your enemies and are pretty unexciting. The Force Field Module that protects you from attacks, however, is very useful.

Other than the majority of your robot’s upgrades being lacklustre, there is also a lot of running backwards and forwards between certain areas of the map. This can be frustrating and make you run around in circles a bit if you don’t constantly consult the map in your inventory.

What I don’t find lacklustre in Retro Machina is the use of collectibles such as “Images” (postcards, newspaper clippings, advertisements), information about deceased humans and files scattered around the world. These items let you piece together the story of how humans became extinct and how robots now reign. It is the subtle nature of these items that lead the player to infer information rather than simply be handed all the answers in this gorgeous, intelligent indie.

Retro Machina is a game that includes themes that have been explored countless times before, yet brings its own understanding and take of these views to the table. It is the care put into creating the game’s backstory and world that made me fall in love with this title and wonder just how horrible a world without humans would be…