Roguebook is a roguelike deckbuilding game developed by Abrakam Entertainment and published by Nacon. Abrakam Entertainment developed the game in partnership with Richard Garfield, who’s known for his work on games like Magic: The Gathering, Netrunner, and RoboRally. Card game fans might also recognise Roguebook’s setting from Faeria, since Roguebook is set in the same universe.

The premise of Roguebook is simple: you begin the story with a pair of heroes who have gotten trapped inside the Faeria book of lore. In order to survive the ordeal, they’ll have to explore their surroundings and battle their way back to freedom, defeating numerous monsters along the way. Like other games in the deckbuilding genre, a playthrough sees you traversing three levels in the shape of a map, each with procedurally generated elements and a boss fight at the end. Each area contains a number of combat encounters, items in the form of healing potions or relics that offer a bonus in combat, and spots to obtain more cards for your deck.

Where Roguebook differs from other games in the genre is its map layout and mechanics; rather than progressing through a set world with multiple paths to choose from, Roguebook consists of a covered hex-based map, which represents a blank page in the book of lore. By completing battles and exploring the map further, you can collect brushes and ink, which allow you to ‘paint’ and uncover more map tiles as you progress through a level. Depending on the kinds of ink you collect, you can uncover a different number of tiles; while some ink bottles might only uncover three tiles in a straight line, for example, others may reveal a whole circle of tiles in one go.

I found this a really clever way to mix up the known roguelike map in the deckbuilding genre. While I used my ink liberally in my first playthrough, I quickly learned that the best thing to do is to ration it as best you can. Often, the only way to evade a particularly tricky elite battle, for example, is to use your ink to carve a path around the specific tile with the combat encounter. If you’ve used up all your ink by that stage, your only option is to engage in battle in order to progress on the map. This can be challenging since, unlike some other card games, the heroes in your party won’t heal after every battle. Instead, you’ll have to rely on healing items scattered around the map, and they can be difficult to come by. The number of other collectibles like gold and cards also greatly varies; where in other deckbuilding games you might get a set amount of gold and a card after each battle, Roguebook has players collecting cards through dedicated tiles on the map instead. The gold and cards you come across on the map depend entirely on how you decide to use your ink. This mechanic nicely introduces an element of luck into the game, because while you do get some gold as a reward after each battle, you’ll be hard-pressed to gather enough to buy relics without the extra gold found on the map. If you have fewer cards and no relics, Roguebook’s battles become significantly harder.

“…a beautiful and immersive card game with plenty of variables to keep things interesting.”

In Roguebook, you play with a team of two heroes in battle. While you start the game with a set team of two heroes — Sharra the Dragonslayer and her trusty sidekick, First Mate Sorocco — you’re able to recruit two additional heroes later on. Each hero comes with a unique deck and the game allows you to mix and match these four heroes as you please. All combinations make for vastly different playstyles. Sorocco, for example, is focussed on building up a heavy defence, while Sharra’s deck is geared towards delivering quick and merciless blows. Like many other card games, combat is turn-based, and you draw up to seven cards per turn. Each card costs a certain amount of mana to play, and you have up to three mana per turn.

Your strategy will mostly revolve around creating a synergy between your heroes’ decks. Things work best when both heroes’ abilities complement each other, and you’ll have to keep this in mind when upgrading cards or obtaining new ones. While it took me a few runs to get the hang of a good deckbuilding strategy, it was incredibly satisfying to see my heroes crush a run once things lined up perfectly.

In addition to your decks, you’ll also want to keep an eye on the position in combat, since both hero characters share one single pool of ‘block’. If the block is broken, the hero in the front position becomes susceptible to taking damage. Depending on the specific card you play, heroes can swap positions throughout the battle. This is useful, particularly if one of your heroes’ health bars is low. When a hero does die, however, you’ll have one shot to bring them back to life with revival cards. Spawning only when one of your two heroes is knocked down, these cards don’t cost any mana to play. However, you’ll need to play five of them to revive your hero. This is significantly more difficult than it sounds: the revival cards can clog up your deck, meaning accruing resources to revive your first hero simultaneously makes it harder to keep your second hero alive. If both heroes are knocked out during a battle, the game is over. Before you start a new run, however, you’ll be able to unlock new cards with your experience points and gain perks for your next run. 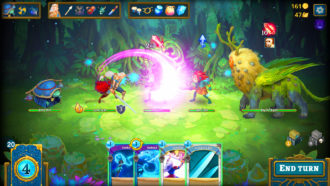 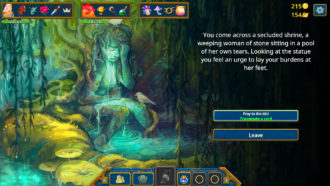 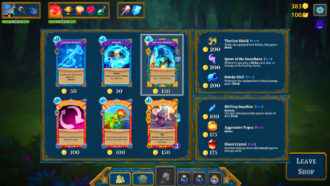 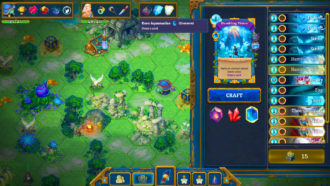 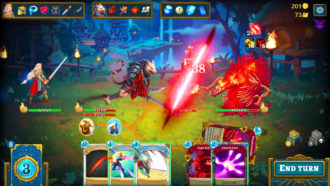 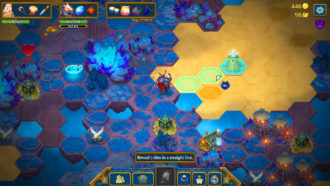 While on the surface, a lot of elements seem to heavily overlap with games like Slay the Spire or Monster Train, don’t let this put you off; there’s more to Roguebook than meets the eye. Compared to other games in the genre, it appears that the makers of Roguebook have taken a tried and tested formula and tweaked it slightly to great success. Additionally, Roguebook’s visual style is colourful and fantastical, drawing you into its bright and inviting world. The result is a beautiful and immersive card game with plenty of variables to keep things interesting, from the brush and ink mechanics on the map, to the positioning of your two heroes on the battlefield. I found that only having two heroes on the battlefield was particularly refreshing. In games like Slay the Spire, things can get repetitive with one hero. In the case of Monster Train, the crowded battlefield can be overwhelming at times. Roguebook feels like it hits that balance just right. Abrakam has done a great job of expanding a well-known formula without overcomplicating the game.

Where I thought the game fell slightly short was its story. The premise of Roguebook is very simple – almost verging on generic – and when it came to the characters, I didn’t find myself invested in their fate. Occasionally, the load times before and after battles were also quite long. Although with that said, both its story and the long load times weren’t enough to keep me away from the game — Roguebook’s gameplay mechanics stole the show. If you’re a fan of card games, it’s a show worth sticking around for.

Roguebook is a refreshing take on traditional card games. With its original map and combat mechanics, it delivers engaging roguelike elements that keep things interesting run after run. While the game might not contain the world’s most ground-breaking story, card game aficionados are sure to find something to their liking in this Faeria-themed release.