The Sniper series has been around for years, beginning back in 2008 with Sniper: Art of Victory. Now returning with a sixth instalment, it’s apparent Sniper Ghost Warrior Contracts 2 is once again bringing in the heavy sniper rifles – literally! Reloading for a sequel to the last Contracts game that came out in 2019, Contracts 2 sees the Sniper Ghost Warrior series taking down a new assortment of shady figures. This time around there are also new long-range targets that demand precision accuracy, but is it worth signing on that dotted line?

Sniper Ghost Warrior Contracts 2 is exactly what it says on the box. It’s a tactical first-person shooter that’s built arounSniper Ghost Warrior Contracts 2d its namesake gun, the sniper rifle. You play as Raven, a self-insertable main character with very little depth past pulling the trigger, an operative in the Middle East. Think of it as a watered-down Call Of Duty campaign with a craving for blood. It relies pretty heavily on the thrill of taking aim at targets while trying to also be a run and gun shooting game. It’s a shame there aren’t more contracts that use this long-range style as it’s favourable to other objectives that don’t involve the game’s principal gun.

“Think of it as a watered-down Call Of Duty campaign with a craving for blood.”

The Sniper Ghost Warrior series is likely one you’ve seen before, but haven’t played. Anyone can tell from the point-blank title what the game is about. This is a sniper game. It’s certainly not all sniper rifle gameplay though, so if anything that’s a misdirect. Contracts 2 is really a sniper game that’s built around a humbler, run and gun approach. The sniper rifle is by no means an assault rifle but it’s surprisingly easy to manoeuvre in situations where bullet drop isn’t an issue, making it viable on medium-range targets.  The game really wants you to use the sniper as much as possible and when you use any other gun you feel like it’s a disservice to the intention of the game.

The gameplay is pretty standard for a first-person shooter. Where Contracts 2 differs from say Call Of Duty campaigns is that you play through larger areas with several objectives. This is more of a sandbox approach. Players take on regions individually and each has around 5 essential contracts. These must be completed before the next region unlocks.

There are also other objectives including bounties and challenges that allow you to earn more money, challenge tokens, and intel tokens. These contribute to a completion level of the region but ultimately it’s the main contracts that let you move to the new area. Loading into the region sets the player forth on a scoped venture. After choosing your loadout and difficulty you’re given free rein to take on the area how you see fit. This could mean exploring before taking on any of the objectives or gunning each one as you come across them. Either way, it’s a sandbox with very apparent walls.

There’s also a surprising amount of the game that’s just simply moving between the locations. The regions in Contracts 2 give the appearance of being fully open-world when in fact they aren’t, instead forcing the player to each contract and early on it becomes clear that you’re always on a set route. You can’t stray far from the path most times because there is no other path.

Using the sniper rifle is good fun at least, though on higher difficulties it’s quite taxing to line shots up with bullet drop, moving targets, wind and travel time. Bullet drop essentially refers to the loss of accuracy that accrues on the bullet after it leaves the gun meaning you need to aim higher to compensate. On lower difficulties, you have a red dot that will show you where the bullet will land in relation to your aim so you can line that up. This was actually fun and really responsive. As a player you need to time when you hold your breath so you don’t miss the shot.

Other contracts involve the player infiltrating areas, though there is no level of stealth required for these missions. You can find a look-out point and pick enemies off or run in and take enemies out as they come to you. In most places, you’ll find cover opportunities severely lacking, which is definitely an issue when playing on higher difficulties where enemies do some serious damage.

Even on lower difficulties, it’s wild that an enemy can land a barrage of assault rifle shots from a ridiculous distance. The enemies in the game are poorly balanced and it’s blatantly obvious. There’s barely any concern during the gunfights for their own safety when up against a sniper. The AI at times becomes so fixated on the player that it would forget cover completely. Sure, it’s fun seeing their heads pop but they don’t provide many challenges when they jump out of cover and just start walking towards you.

Contracts 2 does offer a solid range of weapons and allowed me a lot of freedom to pick and choose what I brought with the main sniper rifle. The bow was a fun inclusion though aiming tended to be a little unclear at further distances. Choosing a silenced pistol or a shotgun isn’t a bad idea as it allows you something for close-range encounters.

The campaign in Contracts 2 feels cliché and most of the time I just wanted to shoot something instead of watching an extended cutscene full of mug shots, maps, and dates. The game centres on a mission to take out a corrupt head of the state called Bibi Rashida and those who help her stay in power. It feels like the intention here is to have a story while also not distracting or inserting morality into the game any more than needed. You are the sniper. Do the contracts. Get paid. This game is not trying to leave a lasting impression on you with it’s narrative. 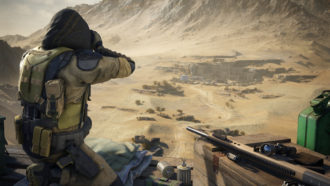 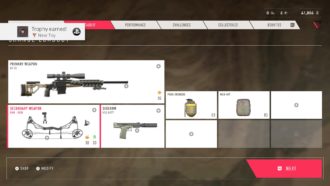 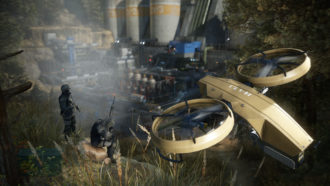 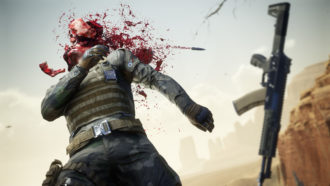 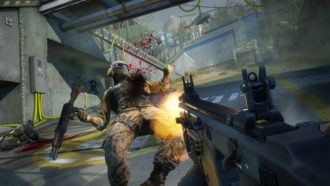 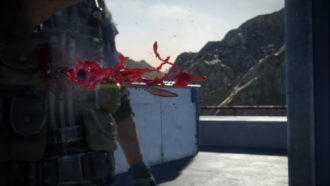 On higher difficulties sniping feels very realistic much in the way that a simulator would provide. Bullet drop is a cruel reality that while amazingly recreated, becomes a tedious motion of practicing – often with a lot of trial and error when the shot is slightly off. I often missed shots or hit the target in the periphery so it wasn’t nearly as satisfying as a clean headshot. While I’m not saying higher difficulties aren’t worth a look, the rewards they carry aren’t really worth the effort. You can get the same thrill in the easier modes with the kill cam frequency turned up in the settings.

Playing as a sniper is quite fun. This game thrives in the long-range areas. Taking aim at a target over 1500 metres away really scratches an itch that even games like Hitman and Splinter Cell can barely reach. These areas give the game a truly impressive scope that begs to be replayable, though when revisited it’s soon realised that there isn’t much else to do. In the end the targets are going to die either by your bullet or by an accident caused by your bullet. The aftermath of such levels usually involves a lot of NPCs running around like headless chickens.

I even came across some weird bugs, nothing game-breaking but more just quirky. After frying the mainframe at Mount Kuamar I was heading back to the Exfiltration point and reached the smaller base above the Data Centre when I was met with a tank that had some how gotten itself stuck in a large gate. It was quite funny finding a tank in this predicament but certainly took away from the realism a game like this seeks to provide.

Sniper Ghost Warrior Contracts 2 does still have a penchant for gore. It’s not uncommon for a shot to pop an enemy’s head like a bloody water bomb or rip through a limb. I wouldn’t say it’s “over the top”; if anything it adds to the drama, and it‘s even more vicious in slow-mo. It also illustrates the brutal power of the sniper rifle in action which is a nice albeit bloody touch to the game. After many slow-mo kill cams it’s hard not to be desensitised to such a vivid head pop.

Sniper Ghost Warrior Contracts 2 also wants to be a stealth game but it refuses to include proper stealth mechanics. While there are ways to hide in levels, they are rarely usable. Once enemies know your location it’s basically impossible to shake off the AI. And then it basically devolves into the same gameplay you’d find in any other shooter. Overall it tries to do many things at once, when really it would have been better off just focusing on the style of gunplay in its title.

Sniper Ghost Warrior Contracts 2 is good for a short time, not a long time. What could have been a glorious game full of compelling contracts and challenging assassinations gets muddied by boring regions that are just begging to be filled with objectives to make them seem worthwhile. Instead, you’ll spend more time walking around than actually sniping the baddies. Sniper Ghost Warrior Contracts 2 feels unsure of whether it can truly be a strong sniper simulator so instead it tries to outgun other FPS and assassination games – unfortunately, despite it’s fun sniping gunplay, it misses the mark on both.