If you’re not familiar with the Warhammer universe, there’s a lot to discover. Warhammer features several different core games, all set in the same overarching universe, but with their own distinct storylines; Warhammer Age of Sigmar is one of them. Originally developed as a miniature war game in 2015, drawing inspiration from Tolkien’s Lord of the Rings and other literary fantasy series, Warhammer Age of Sigmar has a rich backstory, with eight different realms and over twenty factions.

The core gameplay in Warhammer Age of Sigmar: Storm Ground consists of tactical combat on a hex-based map. The game offers both a narrative single-player campaign mode and an online multiplayer mode where you can be auto-matched against others on the server, play against friends, or take on AI with other players online. In addition to this, Warhammer Age of Sigma: Storm Ground also features a basic army painter, which allows you to deck out your units in sets of three colours. I thought this was a nice addition, especially since figurine painting is such a big part of the Warhammer experience.

Warhammer Age of Sigmar: Storm Ground’s narrative single-player campaign consists of a series of tactical turn-based battles with a particular objective. Objectives can range from capturing a control point, to defeating waves of enemies, to defeating specific units. Depending on the faction you’re playing with, the campaign story, enemies, and settings also change, but the overall narrative goal is the same: infiltrate the enemy’s stronghold to emerge victorious. In terms of story and visuals, I found that the narrative aspects of the game – from the setting to the voice-acting – was suitably grand and further immersed me into my campaign.

During a campaign, you’re armed with a Warband, which represents the units under your control as well as their war gear and skills. Each faction comes with its own unique units, and while you start a campaign with only a small handful of units in your army, you can recruit more units for your Warband either as rewards after a battle or through the campaign’s story.

Items that can be collected during or after a battle are represented by cards. Players can collect unit cards or item cards representing war gear to grow their Warband. In addition to this, you can collect lore cards as well, which add more background to the game’s story. These cards are usually represented by a small urn sitting on a specific tile on the map, and you can choose to collect them by having a unit stand on said tile to collect it.

“…the variety of units and hero skills will offer plenty for strategy fans to feast on.”

The single-player campaign has randomized maps, and once you finish a campaign (either by dying or emerging victorious), you get to choose one of three rewards, in the shape of a card. This can be anything ranging from a skill to a weapon or armour, and it travels with you as you start your next run. In my opinion, this was a great mechanic that injected variety into the main gameplay. 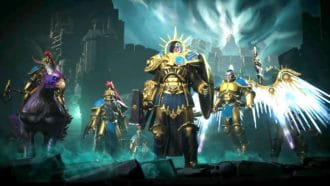 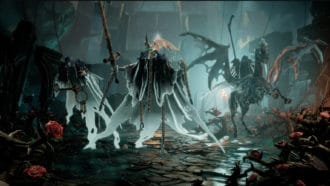 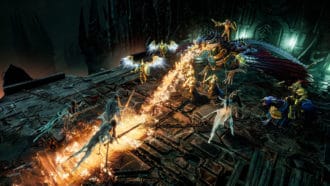 What excited me most were the different factions the game has on offer. In Warhammer Age of Sigmar: Storm Ground, Gasket games have included three factions for players to roleplay as: the righteous Stormcast Eternals, the eerie Nighthaunt, and the rot-focussed Maggotkin. Similar to games like Age of Wonder: Planetfall or Iron Harvest, all factions come with a unique hero: Freya Skyhelm for the Stormcast Eternals, Pellighast the Pitiless for the Nighthaunt, and Ichorian Cankerscorn for the Maggotkin. Each faction hero has a unique backstory and their own moves, skills, and cooldowns in battle. I found that these skills, in combination with how each faction summons units to the battlefield, were the key factors determining my strategy throughout a fight. Whilst the Stormcast Eternals have the ability to summon units next to their army’s hero, the Nighthaunt and Maggotkin have to alter tiles by spawning pyres or corrupting the terrain with rot. Summoning units also requires strategy, as summoning costs you power. The cost of each unit can vary, and power takes time to regenerate. For me, this also resulted in a more staggered approach, where I had to be mindful about where and when to spawn my units, and persist with specific strategies in order to win.

The unique skills of the faction heroes and the variety of faction units were two of the things I enjoyed the most about Warhammer Age of Sigmar: Storm Ground, since they produced wildly different gameplay experiences. The Nighthaunt, for example, is very much centred on a swarming strategy, where I had my hero creating pyres to spawn units and summoning health-healing wisps on others; it was incredibly satisfying to surround the enemy. The Maggotkin have the ability to alter the battlefield, putting hexes on tiles that do damage to opponents but provide bonuses to their own units. Hexes can include anything from corrosion, to poison, to disease. Corrupting the battlefield this way made for more of a cunning victory when I eventually won a campaign. The Stormcast faction had overwatch abilities that felt more like a traditional faction, which might appeal to fans of XCOM or Age of Wonders. In this way, I found the variety in every faction refreshing and I enjoyed experimenting with playstyles and factions to try out different things.

“…while the visuals of each map are stunning, the actual terrain doesn’t add that much variety to the game.”

Where I thought there was room for improvement was the battlefield itself. In a narrative campaign, the art of the scenery changes depending on where you’re at in the campaign story. However, while the visuals of each map are stunning, the actual terrain doesn’t add that much variety to the game. Mostly, a map consists of regular hexes with the occasional bit of raised terrain to give units a range or damage bonus, but that’s about it. Sometimes this made maps feel repetitive to me, particularly if I had been playing for a few hours. Rather than offering a deeper challenge, it mostly felt like different iterations of the same base map. In addition to this, the AI acted irrationally at times in single-player mode, with units moving around on the map without attacking.

That said, though, these issues were minimal, and the variety of units and hero skills will offer plenty for strategy fan to feast on, for hardcore Warhammer fans and beginners alike. While Warhammer Age of Sigmar: Storm Ground may not have the same depth as the miniature war game, with limited factions and heroes, it serves as an excellent starting point for anyone looking to learn more about Warhammer’s Age of Sigmar universe and gives veteran Warhammer fans a chance to experience the Age of Sigmar mortal realms on PC.

Overall, Warhammer Age of Sigmar: Storm Ground is a great strategy title for fans of tactical turn-based combat. The synergy between different factions, playstyles, and faction heroes offers plenty of variety and, combined with the reward system, keeps things interesting. Maps can become repetitive after a long play session, but this felt like a minor bug in an otherwise solid strategy game. If you’re new to Warhammer, or if you’re an old Warhammer hand, you’ll definitely find something to enjoy in Warhammer Age of Sigmar: Storm Ground.