Four years ago, Doki Doki Literature Club! (DDLC) absolutely blew up on the PC. On the surface, it’s initially hard to see why. The game appeared to be your average, run-of-the-mill visual novel dating sim. However, take a peek inside and you’ll soon see that things are actually a bit more unsettling than they first appear, whether it’s the misdirecting nature of the narrative or the game’s shattering of the fourth wall. All this time later and now we have Doki Doki Literature Club Plus!, a new version of the game with entirely new content coming to consoles for the first time.

Serving as a more complete and ‘premium’ release, DDLC+ has got quite a few obstacles to overcome in regards to some of its later mechanics. Thankfully, it quite avidly passes over these obstacles and sticks the landing.

Doki Doki Literature Club Plus! is at times akin to an anime Dead Poets Society

Doki Doki Literature Club did quite well for itself at the time of its original release. This is largely due to the game’s surprising twists and turns which make it a hard game to talk about without spoiling. It’s also a game absolutely best-enjoyed when played blind. So please keep that in mind before continuing. Doki Doki Literature Club puts you in the shoes of a teenage boy in need of a club to join after school. Before long, you stumble upon the school’s Literature Club, devoted to the creating and sharing of poetry. Within the group so happens to be four cute and oh so friendly female co-students. Over time you’ll get to know each member more and more and maybe even confess your feelings to one of them. Sounds like your typical visual novel, right? Wrong.

As you play, you’ll be tasked with crafting poems by periodically rifling through lists of words and forming something out of them. Word choice will affect the poem’s vibes. The poem’s vibes will affect who within the club takes a liking to your poem, allowing you to get closer to that member. Get closer and you’ll discover that, like many real teenagers, they each have their own sadness. All of the love interests here have their darknesses, and it can get heavy.

Doki Doki Literature Club Plus! takes what it means to be a visual novel and turns the concept on its head. Each of the four girls you’ll interact with within the group follow tropes of the genre and then some. Sayori, for instance, is your childhood best friend who’s so bright, bubbly and cheery, like many anime characters before her. Her catch is she always puts others before herself. To a self-detrimental degree, too. Then there’s Yuri, the quiet and intelligent one that has other ongoings behind the scene that’ll just break your heart upon learning them. Simply put, there’s a lot of anime teens with a lot of trauma and sadness and tragedy behind them. By god do I want to protect them all!

Tread carefully if you’re sensitive to topics concerning mental illness, depression and the like. DDLC+ has scenes that are absolutely confronting and entirely meant for shock value. As someone that’s dealt with a lot of these issues, and still does to this day, it’s not something I found too egregious. This is quite literally a relatively brief horror game filled with plenty of tropes. It was never intended to be subtle when it gets to those punches. It’s not interested in explaining every little intricacy that comes with mental illness either. The game is purposed to build, shock you and then leave. The game does this well, but not everyone will share the same tolerance as I.

In-between moments of loss and even glee, poetry and writing are at the heart of Doki Doki Literature Club Plus! Getting to read the other members’ poems to see their worldview or bearing witness to some wonderful anecdotes about the beauty of language, it’s hard not to be impressed. All of the Literature Club members really appear to abide by one rule: take what’s inside you, get it all out and put it on a page. In doing so you can find meaning for all the feelings inside you and make sense of the tragedy and chaos. Some of the poems that come out of these characters have put feelings into words I’ve never thought possible. Writing and its importance is emphasised so well in-game. I came out of the game feeling intense, extremely ‘anime version of Dead Poets Society’ vibes. 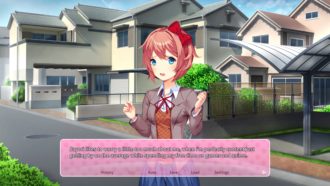 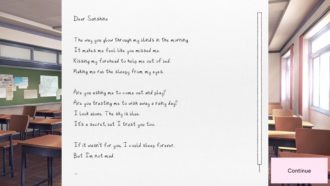 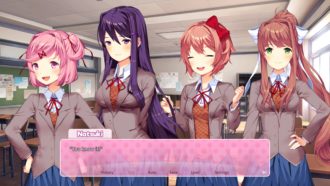 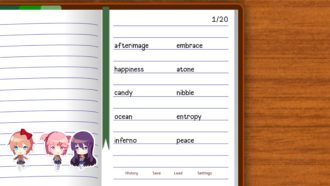 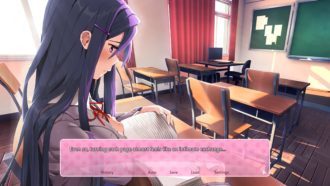 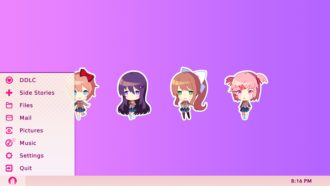 The other reason Doki Doki Literature Club is a game still talked about to this day is the way it develops the fourth wall and then smashes it to smithereens with brute force. In fact, the only real thing stopping this from being a great game instead of just a good one is how long it takes to get there. It’s worth it in the long run – the game takes quite the time lulling you into a false sense of security only to knock that down. Still, a less patient gamer who is already aware of such a twist will have a hard time getting to that point. I know this because it absolutely summed up my playthrough at times.

When this re-release was announced a few short weeks ago, fans undoubtedly were cautiously optimistic. I’ve no doubt fans of the original will be both eager to know just how the jump to other platforms fare, and what’s in this version that’s worth coming back for. The short answer to both those questions is that it doesn’t take long to justify its existence if you’re either a newcomer or fan looking for some more tidbits of fun. Without spoiling too much, the heavy fourth wall breaking techniques that previously relied on the PC platform, now handle in other ways more suitable for console.

“I came out of the game feeling intense, extremely ‘anime version of Dead Poets Society’ vibes.”

DDLC+ also has plenty of goodies for fans needing an excuse to revisit the good old club once more. The game doesn’t just end, with six new self-contained side stories accessible in the game’s menu. They offer quite welcome little desserts of story, such as how Monika founded the club and got to know Sayori and company. There’s also now a built-in desktop within the game, offering the ability to unlock and swap backgrounds or using the music player to play one of Literature Club’s thirteen tracks, and it’s all a fan could ask for.

Considering Doki Doki Literature Club was previously a free game (unless you decided to make a donation), the price tag on DDLC+ seems totally reasonable. What better excuse to send the devs a couple of deserved bucks than a more complete, refined package on new platforms?

Doki Doki Literature Club Plus! was my first way of experiencing the beloved visual novel title. Even though hearing prior whispers of the strange tonal shift hurt me experiencing the game as it was originally intended, I wouldn’t take any of it back. With all the additions on offer, all the concept art backgrounds to rifle through, stored poems to read over and bops of a soundtrack to revisit, I truly appreciate the game for the weird beast that it is. It’s not the same magic as I’d have had if I experienced it blind all those years ago, but it’s pretty damn close.

Near four years since its original release and Doki Doki Literature Club has still stood the test of time thanks to this ‘Plus!’ edition. Where there are some shortcomings in the fact that it takes a little while to get the ball rolling and will be even harder to enter unspoiled, it’s worth it when you consider what’s on offer. Doki Doki Literature Club Plus! is a delight. It’s horrific. It’s heartbreaking. But most of all, it’s a wonderful model of how to take the visual novel formula and absolutely turn it on its head. Just be aware, there’s some sadness behind those anime characters’ eyes.