A little over a year ago I first became aware of the indie adventure game Button City. In May 2020, a Wholesome Games Direct dedicated exclusively to showing you cute and cuddly games was the first time I laid eyes on it. Showcasing friendly and adorable anthropomorphic characters on a quest to save a closing arcade, it’s easy to see why I was drawn in. It’s also possible that we were in the thick of some form of global crisis at the time and I needed that level of comfort. Who’s to say?

Some fifteen months later and I’ve finally gotten my hands on Button City. It’s true that it is a certifiably cute and wholesome game that I needed more than ever, fresh into Melbourne’s sixth lockdown. I just wish it were also a product that had a little more time in the oven to shine brighter than it currently does.

Button City is an adventure full of quirky writing, video game nerds and fighting against gentrification

In-game players take up the role of Fennell, an adorable fox that’s moved to a new town with his mother. Like many kids, they’re kind, find it hard to make friends, love video games and hate doing chores. Me too, buddy. Before long our hero explores the town and stumbles upon Button City, the beloved local arcade full of many others their own age, whether they’re punks or your typical geeks. These are people like Fennell, and finally, they find a home.

Now, Fennell is partied up with a group of friends that include a panda by the name of Lavender, a cat named Sorrel and a bunny by the name of Chive. If you’re noticing all the main characters are named after herbs, it’s on purpose. The supporting characters feature names such as Licorice, Cilantro… the list goes on. It’s very cute as naming conventions go, clearly.

Where Button City is at its strongest is what goes on between the interactions of the characters throughout the game. Playing arcade games such as a spin on Dance Dance Revolution, a rally racing game and Gobabots (more on these later), the multiplayer game that has taken the town by storm – you’re engaging in typical childhood shenanigans. Then you learn of the owner’s intention to sell Button City which henceforth kicks the gear forward for exploring characters in interesting, heartful and adorable ways, given the game’s relatively short length.

“What Button City also does well is capture what it means to be a lionhearted kid, wearing their heart on their sleeve.”

Missions in-game will have you visiting other characters’ bedrooms. Maybe you’ll explore Lavender’s room and get to play the cute little visual novel game they’re creating but are too shy to share. You’ll definitely get to aid Chive in assembling a peripheral for their favourite racing game so that they can play while remaining in their wheelchair. The only complaint I have here is the back-and-forth nature of visiting and revisiting areas for these missions. It’s padding in an already brief game that doesn’t need it.

Jumping in a tall trenchcoat with one of your friends to infiltrate a meeting from the greedy, money-hungry investor looking at purchasing Button City, running a lemonade stand to earn funds for the arcade… the charming activities are endless. The same can be said for the side-missions. One I highly recommend indulging in is a story that sees you unravelling a conspiracy to track down a video game character that looks to be existing in your world. Expect some fourth wall breaking here.

The clever writing, whether it’s puns or references such as a nod to the age-old “my uncle works at Nintendo” line, do well to depict the pop culture that surrounds gaming and fandom. What Button City also does well is capture what it means to be a lionhearted kid, wearing their heart on their sleeve. For every fault the game has, which I’m about to get into, I keep coming back to this strength and how fond of it I am. 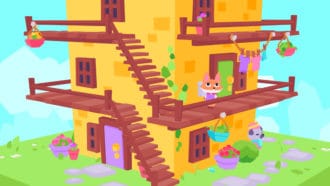 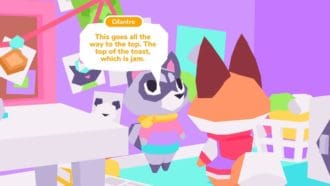 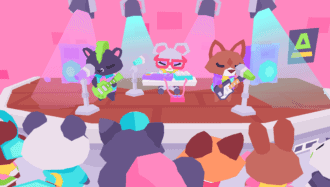 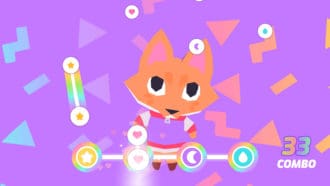 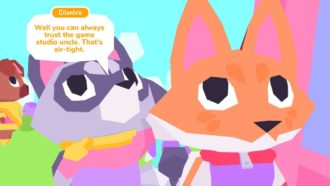 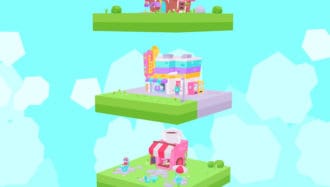 Button City’s art style is minimalistic but it works for the warm and cozy feeling that it’s going for. Players will navigate the town by travelling to different vignettes and sets. Some of the areas you’ll explore are people’s homes, downtown for your shopping goodness and the local park. All of these environments, and their populated characters, are painted in vibrant colours, all the more adding to the setting and the themes the game is aiming for. As great as they are, they’re unfortunately held back by how rough both some of the gameplay is and the bugs you’ll likely face.

It’s hard to pinpoint some of the reasons for the occasional poor performance you’ll suffer in Button City, but it’s all the more a bummer when it’s a modest indie game you’re rooting for. A few freezes, visual bugs and crashes were experienced in the game’s brief six or so hour runtime. More prevalent than this though were audio bugs where the game’s backing music would just drop out for periods of time and you’d be wandering around in silence.

Let’s talk about the arcade ventures you can get stuck into. Button City’s spin on a dance game is incredibly rough. The minigame simply moves too fast, offering button prompts combined with stick movements that are just unreasonable whether you’re playing portable or on your television like I was with my Switch. The driving game at least works, but the drifting you’re expected to perform around corners is so unreliable you’ll often bump into many, many obstacles.

Now for Gobabots, the game that has the town absolutely obsessed. Essentially, it boils down to two teams of four working against each other to shoot items into the map’s main central scoring spot. Contextually, the items you’ll be collecting is fruit off trees, aiming to blast and keep the other enemies away while you lob the fruit into a blender in the centre of the map. Have more scored points by the end of it and bingo, you’ve successfully made the smoothie the blender is slowly building up towards.

This is the minigame that works the most and offers the most fun to be had. While not offering that much of a unique spin on a game mode that has popped up in different iterations over the years, it is contextualised quite well in-game. Players can pick different characters, each with their own attack skillsets upon entering a Gobabots match. characters are earned by collecting gacha balls around the town and in shops, where you can also spontaneously battle others.

This mode is perfectly serviceable, but complaints can be raised about the stiff combat and the fact that matches run a little too long. Stepping out of this minigame and wandering the streets, hearing all the buzz about Gobabots, I can’t help but be a little less convinced, knowing it’s a game that needs work.

Considering this along with the technical issues I experienced, it was enough to bring me out of the experience more than once. If only Button City had a little more time in the oven, then it could deliver more on all the things it was promising.

Even though Button City is the feel-good game I absolutely needed right now, it’s not at the level of polish it should be. I love the atmosphere and the magic captured in the game’s writing and setting, but performance issues and weak minigames hold the title back. Despite some cute and cozy moments experienced in saving a closing arcade, a lot more refining is needed to make this wholesome adventure all the more worth it.