I didn’t grow up playing Psychonauts. The original game came out in 2005, but I didn’t play it until 2021, a few months before I knew I’d be writing this very review. I thought the original game was fine: an interesting platformer with some great ideas, but with controls and a camera that are frustrating by today’s standards, and a well-intentioned story about mental health that resorts to reductive Hollywood-esque stereotypes a bit too much for my liking. It’s a product of its time.

16 years and 3.3 million crowdfunded dollars (USD!) later, Psychonauts 2 is here, and surprising myself, I have completely fallen in love with it. It improves on every aspect of the original game in both story and gameplay, but succeeds as a fantastic, heartfelt platformer by its own merits. This game brightened up my lockdown. As soon as I started playing it, I couldn’t put it down.

Psychonauts 2’s story is set only a few days after the original game and the VR-exclusive Psychonauts in the Rhombus of Ruin, but you don’t need to have played either of them to understand what’s going on. The game starts with a recap of the previous titles, only to set up a brand new story in this beautiful, silly, cartoon world.

Our returning hero is preteen psychic Raz, whose dream is to join the ranks of the Psychonauts: a 60s-inspired psychic spy agency. At the start of the game, he’s finally at Psychonauts HQ – The Motherlobe – ready to get to work, only to immediately be branded a lowly intern. Raz must use his powers to prove himself to the agents by once again exploring the surreal minds of the people around him, amidst rumours that the dark lord Maligula may be returning, even though she was defeated by the Psychonauts 20 years prior.

Faves like Lili, Milla, Sasha, and Oleander return from the first game, but they share the spotlight with dozens of new characters. From the stern but caring Agent Forsythe, to the bullying interns, to Raz’s entire family deciding to move in next door, to a charismatic floating ball of light voiced by Jack Black, there are so many characters in Psychonauts 2, and the game deftly paces its story so they all matter. While the main plot may breeze past certain characters, taking the time to talk to them will reveal a copious amount of optional dialogue, fleshing them out, and on a couple of occasions, unlocking sidequests.

I only wish these optional conversations were handled a bit better. Since there’s so much dialogue – all of which is voiced – there were moments when I wished I could skip conversations line by line. This is possible for a small handful of conversations, but not others. It’s very inconsistent, and I couldn’t figure out why. Since new dialogue options will pop up after certain story events (and after talking to other characters about other topics), you’ll probably hear a lot of the same lines signalling a conversation starting and ending, which can get repetitive very quickly. But like I said, these are all optional.

Psychonauts 2 retains the classic comedic style Double Fine and Tim Schafer are known for. Psychonauts 2 isn’t as overtly satirical as the first game, but it definitely made me laugh more. In the Motherlobe, Raz can speak to many named agents who only deliver one or two lines throughout the whole game. My personal favourite is Lori, who says very politely that she doesn’t want to speak to Raz because she hates children.

The game begins with a content warning for the topics it covers (such as PTSD, addiction, panic attacks, and anxiety), but instead of hamfisting them onto the audience, or focusing on these issues by themselves, Psychonauts 2 delicately conveys them by how they emotionally affect the characters. I found most characters to be deeply compelling, and appreciated how complicated they are, especially with how comedic the overall game is. Of course, this being Psychonauts, the more complicated someone’s mind is, the more fun you get to have once you go inside it.

The bulk of the gameplay consists of Raz projecting himself into the minds of various characters, jumping and climbing his way through their psyches while fighting their inner demons, grabbing collectables along the way. The basic platforming is much like the original (Raz can double jump, wall jump, swing on poles, glide with his Levitation power, etc.), but this time, Raz plays like a dream. Both Raz’s animations and the controls are smooth and responsive, and the camera mostly behaved itself during my entire playthrough. The platforming may not be as jaw-dropping as recent high profile platformers, but Double Fine have clearly paid attention to the shortcomings of the original game as well as where the genre is at now.

On the occasions where I mistimed a jump and plummeted down a bottomless pit (this is a third-person platformer after all), any frustration was completely mitigated by Psychonauts 2’s fantastic checkpointing. When you fall, you simply return to the last solid place you stood, at the cost of a little health. The game never penalises your mistakes by making you repeat a long section. I didn’t feel like the game was going easy on me, and I felt way more motivated to explore every corner for secrets, of which there are many. That same handy checkpointing applies when you die in combat too, letting you simply redo the encounter instead of what came before it.

Psychonauts 2 has optional accessibility settings for folks who need them. I played the first few levels on PC without access to a controller, and since I’m not used to playing platformers with a mouse and keyboard, I turned off fall damage so I didn’t have to wrestle the controls too much, and I’m glad I had the option. The other settings are to make Raz completely invincible and to make every enemy encounter significantly easier if you just want to focus on the story.

“The sheer variety in Psychonauts 2 is staggering.”

Combat in Psychonauts 2, unlike the first game, is actually good. I was pleasantly shocked to see several ideas smartly cribbed from Remedy’s Control. Raz’s Telekinesis power now operates by holding the button to automatically grab a nearby object, then releasing the button to fling it at where the cursor’s pointed, which never stops being fun (just like in Control!). Raz’s gun-like blasting power no longer uses ammo, and instead operates on a cooldown (like in Control!), forcing you to strategize when to use it and to also rely on your other powers. There is now an extremely handy dodge button (like in lots of games, including Control!) making Raz way more mobile than he used to be and allowing you to cancel out of certain attack animations.

Obviously, combat in Psychonauts 2 is not as satisfying as a full-time action game, and may feel repetitive until you unlock Raz’s full suite of powers. Still, I found the fights to be very enjoyable. Psychonauts 2 is mainly a platformer, so battles are infrequent, but unlike in the first game, I didn’t dread them.

There are many different kinds of enemies, and they all require you to use your powers in specific ways to defeat them. Four powers can be mapped to the buttons and triggers at once, and swapping them in and out via the radial menu is near-instant. Several powers return from the first game, but they’ve all been revamped to fit the faster pace of combat. The new powers, the first of which is essentially a grappling hook, are all amazing, and they’re all equally useful in combat, puzzles, and platforming. Each power can be upgraded by gaining ranks through finding collectables and completing sidequests. Psychonauts 2 has Metroidvania-esque elements not just in using new powers to find goodies in previously explored worlds, but also by upgrading your powers to let you use them in brand new ways.

It’s not just with the enemies; even with traversal, the sheer variety in Psychonauts 2 is staggering. Pretty much every mental world features gameplay mechanics that aren’t seen anywhere else in the game. In a brief part of an early level, you find yourself bouncing around inside a pachinko machine. Another level is a competitive TV cooking show. I would describe one late-game world as a cross between Wind Waker and Mario Galaxy. Some worlds split off into multiple mini-worlds, each with their own concepts and designs. Even when I wasn’t too hot on particular mechanics, they never overstayed their welcome, and I was always excited for what came next. And there’s so many of the worlds themselves. There were multiple points when I thought the game was close to ending, and then it revealed a whole new, massive world to play with. All the worlds are a blast to play; you will find no meat circuses here.

And that’s just everything inside minds! The Motherlobe is a large explorable area on its own, but you eventually get access to the quarry outside, and it’s enormous. There are no enemies outside mental worlds, so outdoor areas are marvellously focused on platforming. You can’t see where you are on the map, but each nook and cranny is so visually distinct, I didn’t need to. And I won’t spoil it, but the quarry isn’t the only large outdoor area in the game. Psychonauts 2 gives you so much to do, and it’s all brilliant. 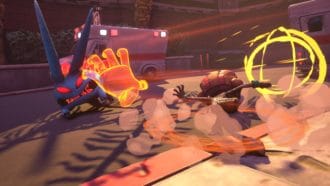 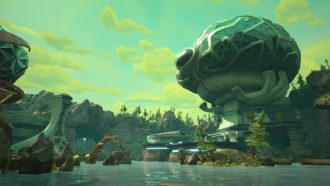 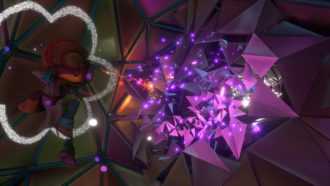 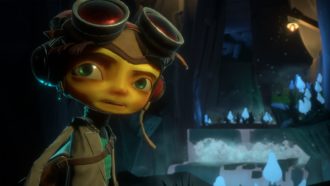 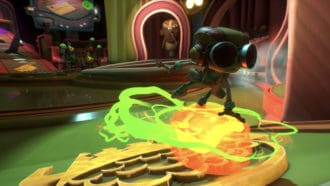 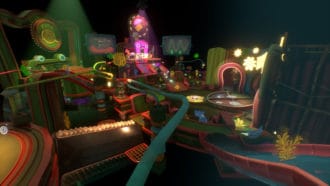 I’m not an expert on talking about graphics, but gosh, Psychonauts 2 is pretty. The game experiments with different art and animation styles throughout. Raz’s powers are animated differently to himself and the world around him. One particular world is entirely cel-shaded. The tutorial world is made of grossly realistic flesh and teeth (which FYI is also mentioned in the opening content warning). There’s one level where you spend about 10 seconds inside a giant cake, and it was one of the best gaming experiences of my life.

The music is fantastic, as is the level design. There are parts of levels that twist around themselves, turn out to be bigger on the inside, or seamlessly teleport you somewhere else. Much like the worlds, the technology behind Psychonauts 2 also boggles the mind, or at least it boggled my mind. I was thoroughly impressed by everything I saw.

Psychonauts 2 is absolutely fizzing with ideas in gameplay, story, and presentation. Its story is emotional, its characters are hilarious, its worlds are huge and imaginative, plus I had a fun time actually playing the dang thing. Apart from some minor issues with the optional dialogue, it’s clear Double Fine went all out developing this title. Nothing feels rushed, nothing feels unfinished, and nothing feels like padding. This is a fabulously well-made game, and a perfect game for lockdown. If you’re looking for some extra joy from your video games, you need to play Psychonauts 2. If you’re a fan of the original, I suspect you’ll like it even more.