Tribes of Midgard Review – The tribe has spoken

Heed the call or suffer Ragnarök in all its glory! Tribes Of Midgard has arrived and it brings with it towering Jötnar hell-bent on seeing your settlement destroyed. It’s a survival game that allows players to go it alone or join a full tribe of up to 10 people as you battle a procedurally generated world and rally to protect the sacred Seed of Yggdrasil against a nightly onslaught of foes huge and small. It’s the first game we’ve seen from indie game studio Norsfell and it promises quite the adventure, but are the spoils of Valhalla worth the battle?

Tribes of Midgard starts out as a broad survival game. It encourages players to gather resources to craft new weapons, tools, armour and village upgrades as well as explore the sprawling world around you. All the while you’re up against it. Foes and vicious predators stalk the village and then at nightfall the Helthings descend upon the sacred tree. Already this seems like enough to contend with, right? Well, I guess you’d better meet the fearsome giants that roam the lands of Midgard – the brutal Jötnar. Each is an elemental nightmare but just remember, with the right set of weapons they’ll fall before they even reach the tree.

“The game could very well be in a ‘freemium’ stage before the next season.”

What surprised me about the Tribes of Midgard is that it’s a live service game beneath what appears as a survival game. Upon loading it up for the first time players are greeted with the “Season 1: The Wolf Saga” subtitle which alludes to there being progression. There’s also a changing item shop and a battle pass that’s currently free, featuring both cosmetics and starter packs that adjust the early game to slightly boost the player’s progress. It’s an interesting inclusion that encourages the grind by giving you a reason to play more. Each and every campaign the players start rewards them with XP that unlocks more of the battle pass, though I am wary of what a season 2 could bring. Will this rely on the microtransaction economy that appears in the game? The game could very well be in a ‘freemium’ stage before the next season.

Loading into a new campaign is a mixture of finding your footing in a new world and returning to the loot grind that the game functions upon. Souls are the most common resource for the game and at the beginning one feels soul poor. You will acquire souls by gathering resources, killing foes and completing short quests. It’s so very easy to spend what few souls you have and grinding them back feels unforgiving. When playing with others it feels like there’s even less souls to go around, potentially an unbalanced scaling system behind closed doors. When playing solo there are more souls available but with how reliant the gameplay is on them the grind for them feels overly steep in either case. I found playing solo favourable because souls were all mine for the taking. This wouldn’t be an issue if one has 10 friends free to play it, but when loading into the matchmaking, one is paired with varied players that make the game seemingly harder to take on. Voice communication is reliable though as always it does remind me why I was always told not to talk to strangers. Where the game shines is when you’re with a good lobby of players though of all the games I’ve played, only one has made it to the end of Saga Mode. 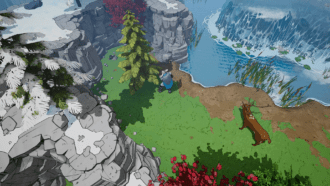 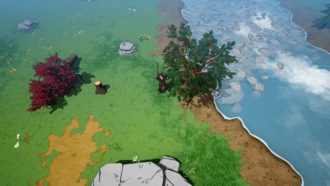 Matching the random harshness of strangers on the internet, the procedurally generated world often can have quite a learning curve. Many of the resources needed for crafting aren’t easy to come by due to the random generation. It can often mean that objectives are not only tricky to locate but hard to reach if on top of or separated by obstacles such as higher ground or lakes. While it does make every game different, it also means players must adapt to the map for every new game. While I’m not against a randomized environment I found that at times it would become more of a hindrance. Sure, it adds to the survival element of the game as it does force players to approach each campaign differently but it’s a tedious dance. Tribes of Midgard does offer ways to traverse the environment, though it requires crafting and building resources that can be quite long-winded to prepare so I rarely even bothered. If I couldn’t reach an area by foot then I didn’t see it necessary to explore due to the effort required. Considering this is a survival game that relies on exploration, it tends to force players to sacrifice thorough ventures through Midgard just so they can perform upkeep on the village before night brings a new attack.

In one playthrough, I found an incoming giant that was trapped on the other side of a higher leveled area and was unable to pass despite continuing to walk on the spot. It was a puzzling bug that illustrated the logic of the giants a little too clearly. The paths they take to the camp are set and they won’t divulge from them no matter what spawns in the way. It wasn’t often that something would block the road though it was common to find the path twisting its way around lakes or the higher leveled areas.

“…a tedious loop of unforced errors quickly grows tiresome despite how nice the world looks.”

More puzzling still was the player character’s aversion to water. This made many areas quite annoying as not only could my character not swim, but there was no transport such as a boat to cross it. It hurts the game in that it pushes players to loop around bodies of water and usually reach dead ends. Considering this is a game centred on Vikings this feels like an area that could’ve been handled better. The few times I accidentally dodge rolled off a raised section, the game instantly kills you and sends you back to the village meaning you have to go find the cliff your loot is waiting on. Often the game just begins to feel like a tedious loop of unforced errors and it quickly grows tiresome despite how nice the world looks.

The aesthetics of the game are quite catching and enjoyable though one isn’t really given time to appreciate the visuals of the game. The colour palette is bold and unafraid of cell shading which works in its favour. There are many times when I simply wanted to take in the world though, such as looking at the towering giants above, but it’s incredibly hard and in most cases impossible to view them in all their glory. The camera remains fixed in a way that never leaves the player so appreciating the sheer height of the beings is impossible. While there are images of them in all their glory that appear to be gameplay they actually aren’t possible to view in that manner in the game so prepare to be battling giants at weird angles.

The combat feels responsive considering its limitations. Weapons always seemed to break at inopportune times, often meaning you’ll be forced to either repair it, switch weapons or run. While the tutorial is good to get you started there is more to the game that players should be introduced to by hints and the like before being tossed into the deep end. An initial tutorial playthrough would have been great here to fully introduce players to the many systems in the game. Without this, I often found I was better off staying at the village rather than venturing off into a mechanic I had no introduction to.

Saga mode is likely where most players will cut their teeth with the game and it certainly provides a challenge both in solo and in matchmaking selections. Running for about 2 hours, it builds up the difficulty till Ragnarök arrives leading to the culmination of the saga mode. It’s a great feeling, being in a group of people who’ve all been working with you to get to that endgame point. To be honest after that, once the game is over and you’re given your XP though it all feels pretty hopeless. With a 50 tier battle pass and an assortment of challenges to complete you need to basically jump in and do it all over again. What the game lacks is options to alter how the campaigns unfold. The only modes available to the player are solo play, matchmaking and then survival. Survival does allow some customisation to the game but it isn’t really worthwhile enough; though, the difficulty options are welcomed.

The game is also careful not to overwhelm the player with narrative in a survival experience. The story is painted in broad strokes, with the tutorial doing the bulk of the heavy lifting so players understand the stakes of the game without it becoming a chore for every run. Since the majority of Tribes of Midgard relies on replaying the same scenario I hope that Season 2 will bring more to the current storyline though even I admit that most loops of the game aren’t going to be done in search of more narrative.

Players can still earn seasonal XP though the amount depends on the settings selected. I would’ve liked to see more options here such as preset maps, options on how the giants attack such as frequency, type and if there are multiples coming at any one time. Even starting players closer to Ragnarök. Survival mode has so much more potential to be the part of the game that makes the tribe stick around but it currently feels like it lacks clarity aside from being an endless mode.

The future of this game will be one to watch. I’m sure the developers at Norsfell have plans for where Tribes Of Midgard will venture next, I only hope that it develops its core systems a bit more, even with a battle pass attached. Maybe that might bring new locations in Midgard with more Seeds of the Yggdrasil to protect, even more devastating foes to slay and other in-world events. There is so very clearly a lot of potential in this game but it still feels like it’s questioning what it is and can be. Having friends to play with will make multiplayer games feel less daunting but for a game that does allow for solo play it also is fairly unforgiving.

Come with the tribe and stay for the grind if that’s your thing though this isn’t for everyone. Much of the game is spent either gathering or fighting until your weapons break as you beg for more souls to make the necessary upgrades and repairs to the camp. While it does offer a battle pass that’s free I’d still proceed with caution. There is a real challenge here that requires strategy but it falls short with the settings available in Survival mode for those either looking for a more brutal challenge or an easy go instead. Tribes of Midgard is best played with friends but if you’re after a game that rewards persistence then maybe you’ll find the value in solo-play too. It’s got lofty ambitions, but it doesn’t quite manage to meet them – at least not yet.