We Sonic fans have a complicated relationship with nostalgia. We will freely admit to anyone that the 3D Sonic games on the whole are pretty bad, and yet we also claim to love them. It’s not just that we are remembering the good parts; the bad parts are often a source of amusement. It’s enough that every so often, we forget how bad it really gets, and we sit down to replay one of these old games only to be rather rudely reminded of the truth.

I’ve done it more times than I can count: I’ll settle in for a Sonic session for only a brief time before I realise that I’ve made a terrible mistake. But before that realisation hits, I have a blessed few (however foolish) moments where I think to myself “Aw yeah, this is just as good as I remember it.” When playing Sonic Heroes, that feeling lasts only for a few levels. For Sonic Adventure 2, it lasts until the first mech stage. For Shadow the Hedgehog, it ends promptly after the first cutscene. And for Sonic Colours: Ultimate, That feeling ends after about 30 minutes, which is, coincidentally, just about the length of the preview version I played last month.

Sonic Colours: Ultimate brings the 2010 original from the Wii to current consoles, with updated graphics and some new tweaks and gameplay features. Set in an outer-space theme park built by Eggman, Sonic Colours: Ultimate sees the titular hedgehog and Tails on an adventure to rescue the Wisps, an alien race being held captive by Eggman. The Wisps grant Sonic various special abilities that allow him to speed through levels, smash through enemies, or access new areas. Ultimate introduces the new Jade Wisp, which transforms Sonic into a ghost that can slip past enemies and solid objects. There are 6 worlds in total, representing the 6 planets Eggman has kidnapped as part of his evil scheme.

The gameplay itself is a mix of fast-moving 3D segments and 2D platforming, like so many 3D Sonic titles before it. Its predecessors never seemed to mix the two mechanics quite right, and Sonic Colours doesn’t either.

Colours is at its best when Sonic is speeding through levels on foot or grinding on rails. Paired with the fast-paced and catchy soundtrack, things click into place. The Wisps with abilities that encourage fast movement, like laser and drill, compliment these parts perfectly. Even when the world shifts into 2D platforming, as long as Sonic keeps the ability to keep his trademark speed, Sonic Colours is a fun time. But whenever that fast movement is replaced by finicky platforming, Sonic Colours begins to become a chore.

“… whenever fast movement is replaced by finicky platforming, Sonic Colours begins to become a chore.”

Not every 2D platforming segment is a miss, but here are far too many areas that force you to slow down, or stop entirely, just so Sonic can stand on a button for a while or awkwardly jump across unforgivingly narrow platforms. Some Wisps, notably the Cube Wisp which forces Sonic to come to a complete stop, don’t help matters. Even the new Jade Wisp is a culprit, as the Ghost ability moves very slowly. There is plenty here that could dearly have used some quality of life upgrades, but we’re not that lucky.

Ultimate slaps a Band-Aid over these frustrations by making it so that Sonic no longer has to restart the whole level after running out of lives – if you die with a life left, Tails will revive Sonic just before the place you died, while if you have no lives remaining you will restart from the last checkpoint you hit. This might annoy some ‘difficulty purists’ out there, but it certainly prevented me from throwing down my controller in disgust – at least until the final boss.

Part of this might be my fault for having higher expectations – Sonic Colours: Ultimate is a simple remaster after all, not a remake. So to expect major overhauls is perhaps not very fair. With that being said, it makes me wonder why they thought to re-release it at all with so much unchanged. The entire soundtrack has been remixed, apparently – there are a few tracks in which this will be immediately noticeable, such as the opening track Reach for the Stars and the credits track Speak With Your Heart, but there will be other tracks that will make you wonder if anything is different at all.

It’s at least nice to see Sonic Colours in HD widescreen. The environment design was undeniably vibrant even in 2010, but now it looks even better. The visuals still trail behind current-gen games, but this is really only noticeable during the game’s few cutscenes. The rest of the time, Ultimate is a joy to look at across its vibrantly designed worlds.

It’s good that cutscenes are few, because the test of time hasn’t done them any favours. The plot, such as it is, is just an excuse for Sonic, Tails, and Eggman to quip at each other with humour that wasn’t funny then and is excruciating now. 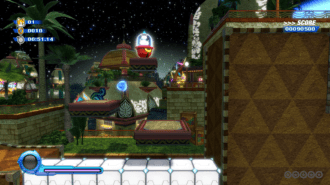 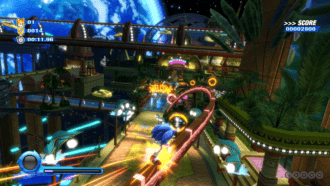 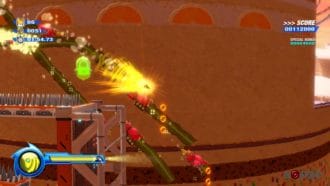 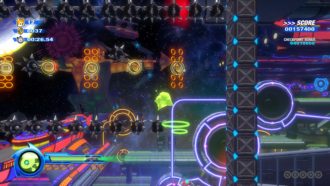 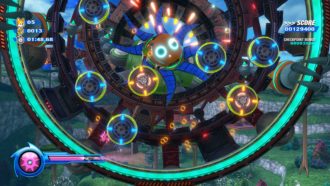 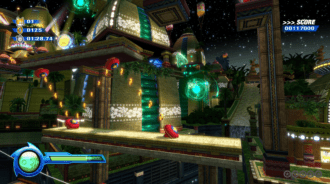 There are a couple of extra features bundled in with Ultimate: a customisation menu where you can deck out Sonic with a new look in exchange for tokens you can collect during stages, and the all-new Rival Rush Mode, where you can face off in a race against Metal Sonic.

Before you get too excited, Rival Rush Mode is pretty much a glorified time attack mode. It will become available after Sonic collects half of the red rings hidden in a given world, and there is only one Rival Rush challenge in each world. Metal Sonic’s icon will appear over one of the world’s levels, and you can replay that level while racing him for the best time. It’s pretty underwhelming, especially since it’s hard to even see Metal Sonic mid-challenge. The character model is so comparatively small on the screen that it’s easy to miss him. If you’re a Metal Sonic fan, you’d be better served just watching the animated short that Sega released during the lead-up to Ultimate.

The customisation options are a neat idea, but the novelty doesn’t last long. There aren’t a lot of options, and many are a simple colour-swap of Sonic’s gloves and shoes. I would have loved to see some wilder options like being able to change Sonic’s quills, or even an ability to play as Metal Sonic or Shadow. There aren’t even any that get unlocked as reward for achievements, with the only locked items being unlocked after completing all 6 Rival Rush challenges.

Both features feel like a last-minute attempt to cram some extra content into this lacking remaster, and neither kept my attention long.

On some level, I’m a little sad that Sonic Colours: Ultimate has made me lose my nostalgia goggles for this game, because it’s made me face the fact that it was never as good as my memory claimed. But at least whenever I forget the lesson I’ve learned and switch on Sonic Colours once more, I don’t have to drag my Nintendo Wii out… and I can put him in some cool cheetah-print gloves. So that’s cool, I guess.

Sonic Colours: Ultimate serves as a sad reminder that even the 3D Sonic games that are ‘one of the good ones’ don’t hold up very well. The updated visuals, soundtrack, and gameplay tweaks at least make it a better experience than the original, and some quality of life upgrades make the worst parts marginally less painful. Sonic fans nostalgic for this game will likely still value having this remaster in their collection, but the new customisable options and Rival Rush Mode are simply not enough to make up for what Sonic Colours lacks. It’s hardly what we were hoping to get from Sonic’s 30th anniversary.