Ever get an itch to play something simplistic yet innately satisfying in design? Sega and Rya Ga Gotoku’s Super Monkey Ball franchise has become that for me in recent years. The series has but one simple concept that lasts surprisingly well for each entry and its bountiful level count. That concept is that you are a monkey, inside a little ball. Have fun rolling through this death run of an obstacle course to reach your end goal. Good luck. Super Monkey Ball Banana Mania is the latest example of this, proving for some of the best arcade fun you’ll have all year.

Banana Mania is the largest and most ambitious Super Monkey Ball foray yet. This is mostly due to the fact it serves as a 20th-anniversary celebration for the series. In this, we have a remake of Super Monkey Ball Deluxe, a compilation of the first two series games, containing over 300 wild and wacky levels. The arcade adventure’s ‘Main Game’ (the closest thing resembling a campaign) contains a third of this bunch. Not much is offered on the way of a story here. Players, along with protagonist AiAi and his monkey friends, are beheld to a series of comic-book-style sequences introducing each new themed world, displayed to you through an in-game television show.

Those that hold the original versions of the first few GameCube Super Monkey Ball entries dearly may find the ditching of the original cutscenes as a cardinal sin. Still, it works. Of course, watching unvoiced (save a few mind-numbing ape grunts) is entirely basic and won’t stimulate players as they’re about to delve somewhere new. Yet, I have to give chops to Rya Go Gotuku for not beating around the bush. We’re here to see some monkeys throw their entire weight around in a Japanese gacha style ball, damn it! That’s all we need.

This should hardly come as a surprise to those intimate with the series, but as someone who only had prior experience with 2019’s Banana Blitz HD, I was once again reminded here that Super Monkey Ball can be tough. Whether it’s the Main Game or the hundreds of challenge levels on offer, Banana Mania excels at cruelly following up the false sense of security you’ve developed with its earlier, easier levels with those that pull the rug out from under your feet.

I seriously have a bone to pick with so many levels in Super Monkey Ball Banana Mania. On the one hand, I dread thinking about the amount of Fall Outs or Time-outs. On the other, there’s something intrinsically satisfying about finally mastering a level, seeing all the bizarre bouncing and environments work in your favour to at long last see that clear you’ve been beating your head against for some time.

“… Banana Mania excels at cruelly following up the false sense of security you’ve developed with its earlier, easier levels with those that pull the rug out from under your feet.”

Levels in this regard can vary but are always simultaneously the basic and smart design the series is known and loved for. Joyous examples include Chipped Pipe, a heavily momentum focused level in the Main Game’s ninth world. Here, players will delicately navigate a series of half pipes, with holes in the middle, eventually careening further upwards towards the goal. Examples that will test others in less-glamorous ways include ‘Double Spiral’ and ‘8 Bracelets,’ two loop-de-loop fashioned levels that feel more unfair in their physics and taper towards luck-based. Levels of this nature showed up in Banana Blitz too. It’s now dawned on me some of these set pieces meant to laugh at you are a series staple.

While so many levels can be cruel, Rya Ga Gotoku has undoubtedly also looked to make the series more approachable than ever. An assist mode is also available in Banana Mania and can be opted into at any time in the pause menu. What this aid brings is a 120s window to complete a level (double that of before) and an option to slow down time to make those tricky bends all the smoother. I truly hope this isn’t something the longtime fans turn their nose up at too much, it’s entirely optional and is just an exciting potential means to get more people in on the Super Monkey Ball love than ever.

Super Monkey Ball Banana Mania has truly occupied my mind, unlike any other arcade game before it. Largely, this is due to the fact this is a game bursting at the seams with content. Even if this were to be a simple re-release, it’d be good in my book. Instead, it has plenty of moving parts to reel you back in all over again. The remade design is but one of them.

The remade levels thanks to Banana Mania are more colourful, realised and readable than ever. It’s been some time since the original Super Monkey Ball games were released. Getting to see them in a new light where backgrounds and environments are more than just a few colour tones will undoubtedly be exciting for fans. The same can be said for the new versions of the OST on offer. Something that’s colourful, homely and friendly. Simply put, this is a perfect game for the Switch. Jumping into bed with my console in hand, the recreated levels and poppy music cheekily invite me in, even if it’s disastrous difficulty that awaits. 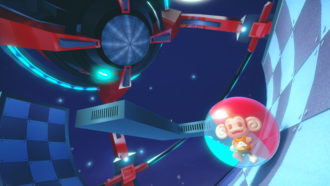 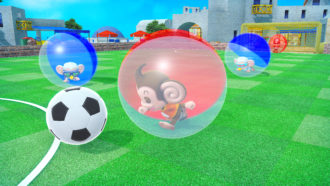 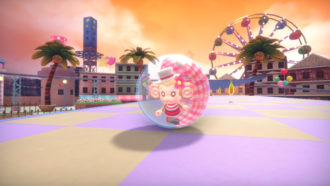 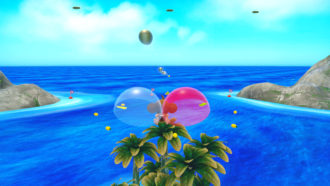 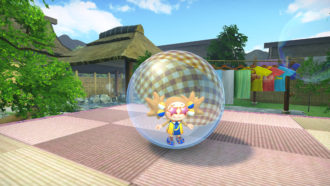 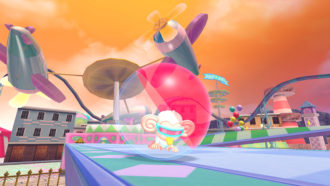 On top of this, hours of fun can be binged in the minigames alone or with friends. Playing a simple sporting match of soccer or tennis against other members of the cast is way more fun than it has any right to be. The racing mode sees players throwing their weight around in-balls across a track, collecting Mario Kart-style powerups to come out on top. It’ll likely be a friendship ender like its inspiration. It’s so heartening and exciting to see all the beloved minigames I know series-long have been asking for return here. Another mark in Banana Mania’s favour against its 2019 counterpart.

That’s not all. Missions in-game serve as challenges or feats that players can complete in levels and minigames. These can look like collecting all of the bananas in a given level or clearing another in under 10 seconds. These missions then net you points which you can use to spend in the game’s Point Shop. Here, you’ll unlock goodies such as characters like Yakuza’s Kazuma Kiryu (can confirm he’s pleasing and exciting to play), filters for the Photo Mode, levels with art stylised in the original fashion and a very expensive jump that can get yourself out of hairy situations. I understand that’s a sore spot for the series purists but for those less experienced and new, it’s absolutely your friend.

This in-game version of a checklist and prompt to have you milk every challenge Super Monkey Ball Banana Mania throws at you is incredibly well implemented. I can’t wait to continue to use it as a guide to only better myself at the game and its tough to wrangle physics.

Bar none, Super Monkey Ball Banana Mania is my favourite arcade game on the Switch so far. The game’s short burst levels, no matter how challenging or luck-based they may be, lend themselves so well on a portable console. Rya Ga Gotoku Studios have done incredibly well in recreating and returning the niche love their arcade series has brought over the years. With plenty of playtime, cute characters to play around with, minigames to battle your friends in and challenging missions to overcome, Banana Mania can be everything you’ve ever needed in an arcade game on the Switch. It’s worth going ape over, folks.