Astria Ascending is an RPG with a distinguished pedigree behind it. The story was written by Kazushige Nojima, a veteran of the Final Fantasy series, and the music was composed by the legendary Hitoshi Sakimoto. With names like these, and a unique take on turn-based combat, French-Canadian developer Artisan Games have made an ambitious title, this JRPG not from Japan. The game boasts a stunning art style reminiscent of watercolour paintings, perfect for this side-scrolling adventure, and Sakimoto’s soundtrack is marvelous. Unfortunately, frustrating mechanics and a tedious approach to storytelling hold Astria Ascending back from being as remarkable as it aspires to be.

Astria Ascending takes place in the high fantasy world of Orcanon. Our heroes are a group of demi-gods: normal people conscripted by gods to protect the people. They are given powerful abilities, but die after three years on the job. All the fantasy races of Orcanon live in harmony in a big city called Harmony, and maintain said harmony by eating a magical fruit called Harmelon, delivered to them by a race of subservient imps known as Migmies (a name that never stopped making me uncomfortable). Our demi-gods have three months left to live, and find the world besieged by monsters known as Noises, and must travel the world to find out what the heck is going on.

Astria Ascending throws all this information at you, and more, in its first few minutes. It’s a lot to take in at once, and the game rarely stops to let you catch up. It took me a long time to figure out that Eko (a character) is a Peyska (a race) from Vetira (a city) because the game doesn’t do enough to explain the difference between those three fantasy proper nouns, nor the dozens of other names and terms that get thrown around. A large part of this overwhelm stems from being introduced to eight main characters at the very start of the game. During the 16 hours of the game I played, the eight demi-gods were together almost all the time, which means most cutscenes had a minimum of eight characters in it. Too many cooks, and all.

As a result, Astria Ascending’s story is extremely slow-paced, made even slower by the single worst part of the game: you can’t skip dialogue boxes. In every voiced cutscene (and some unvoiced), you have to wait for each dialogue box to appear and disappear, one by one, often with several seconds between them. This would be a minor gripe if there aren’t so many cutscenes, mostly of characters talking whilst standing perfectly still.

During casual dialogue these exact same boxes can be skipped with a button like in other RPGs, so I don’t know why the devs made the choice to not do so during cutscenes, because it would’ve greatly helped Astria Ascending’s poor pacing. Perhaps it was to highlight the game’s voice acting, which isn’t terrible, but mediocre considering how much of it you have to sit through. It’s almost like the voice actors were given their lines without any direction. There’s several moments when characters speak calmly when they’re supposed to be emotional, and multiple names and terms are pronounced differently between characters. There’s a potentially interesting tale here about how being demi-gods affects our heroes’ relationships with their loved ones, and whether enforced harmony benefits the world, but all the game’s issues are maddeningly distracting, which discouraged me from caring. When this world is tough to understand, and every scene is a chore to get through, the plight of the demi-gods is a hard sell.

Astria Ascending’s gameplay is not nearly as frustrating, but still falls short in some areas. Outside of battle, the game is a side-on platformer. You control Ulan, leader of the demi-gods, through cities, towns, field areas, and dungeons. The level design is pretty bland, but lets the game show off its fantastic art direction. The watercolour aesthetic never stops being impressive, and pairs perfectly with Sakimoto’s brilliant soundtrack. Despite being a side-scroller, Orcanon is richly detailed. Even the interiors of every individual shop around the world are unique.

“All the game’s issues are maddeningly distracting.”

Each dungeon and field area is separated into small rooms, somewhat like a Metroidvania, but getting around them is made difficult with the game’s convoluted map. It’s a bizarre flowchart showing how the rooms are connected to each other in a 3D space, which is information I never found useful. I found it difficult to figure out where exactly I was, and what winding path I had to take to my destination. Individual rooms in dungeons look fairly interchangeable, so having a cohesive readable map would’ve helped.

Enemies appear as floating blue orbs that Ulan is able to attack with her sword to gain a pre-emptive strike, but this hardly ever worked for me. Battles always started a split second after I pressed the button, before Ulan’s attack animation could trigger. Astria Ascending claims to be a difficult game, and in some fun ways it is, but in other not-fun ways it’s because enemies almost always attack first.

Combat is turn-based. Only four party members can participate at once, but any of them can spend a turn switching reserve characters in and out. What sets combat apart from other RPGs is through a resource called Focus Points, or FP, which are shared by the party. Hitting an enemy with their elemental weakness grants 2 FP, and hitting them with something they’re strong against loses FP. Up to 4 FP can be spent to power up whatever a character chooses to do on their turn. The system is reminiscent of titles like Bravely Default, but having the whole party share FP encourages teamwork. I liked getting swordswoman Kress to whack an enemy for 2 FP, then having the mage Dagmar spend them on a powerful multi-target spell. A character can take a turn to add a temporary Focus Point for someone else to use. Artisan Studio have set out combat so, in theory, every character is always useful, no matter what.

However, I found certain aspects of combat to be imperfectly balanced, and part of this comes back to having a whopping eight party members from the outset. Each of them has a unique skillset, and some of them don’t have elemental abilities at all, which means they have no way to accrue FP. This means they’re hardly ever useful, particularly Arpajo the thief, whose main ability is to steal items I never need. Furthermore, I consistently found the party’s physical damage to be significantly weaker than their magic, even when buffed with FP. Battles eventually turn into repetitive slogs, so I found that having Dagmar the mage in my party was the most efficient way to get through 90% of encounters. Focus Points are a cool concept, but having them solely dictated by elemental attacks when there’s many other things characters can do in battle feels like a missed opportunity.

There is a class system, in which you receive tokens throughout the plot to give a character one of several jobs. Each job comes with an additional skill tree, dramatically changing how a character plays. I particularly enjoyed the Hunter job, which inflicts specific elemental weaknesses onto enemies for another character (Dagmar, let’s face it) to take advantage of. Unfortunately, jobs only give you a vague description before you choose to commit to one, making it difficult to know what you’re going to get. 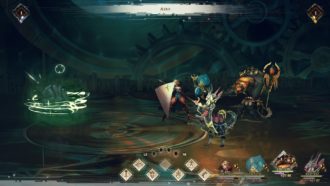 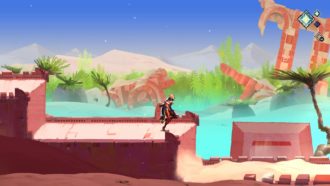 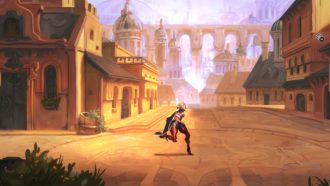 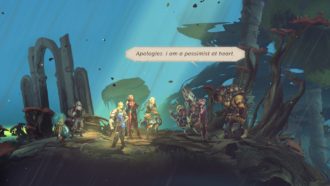 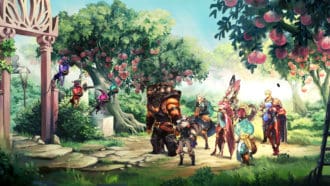 The game has a surprisingly healthy amount of side content, including side quests, monster hunts, a battle arena, and J-Ster, a collectible-based minigame you can play with NPCs. It’s a hexagonal take on the Triple Triad minigame from Final Fantasy VIII (something an NPC cheekily alludes to). I found J-Sterto fun and strategic, and found myself getting invested in collecting the best “tokens” to put in my deck. However, I found an issue where one particular rule didn’t work how the tutorial describes it, which meant that sometimes I would lose and not understand why. Yet again, Astria Ascending comes very close to accomplishing something amazing, and stumbles at the finish.

Despite some the JRPG royalty involved, Astria Ascending just isn’t able to live up to the high expectations. The good news is that Artisan Studio seem committed to updating the game over time, so ideally the rough edges present will get smoothed out. But at the moment, Astria Ascending’s innovative combat, gorgeous art, and esoteric story are overshadowed by frustrating cutscenes, painful pacing, and many half-baked mechanics. Hitoshi Sakimoto’s soundtrack sets a high bar, but in its current state, the rest of Astria Ascending has trouble rising to meet it.