Bravely Default II is a Japanese role-playing game developed by Claytechworks and published by Square Enix on Nintendo Switch. It’s the latest entry in the Bravely Default series and the successor to the 2015 release, Bravely Default: End Layer. The announcement of the game came as a bit of a surprise; Square Enix shared the news of the upcoming Switch title out of the blue in December 2019.

Despite Bravely Default II’s title, the game is actually the third instalment in the series and the first title released on Nintendo Switch rather than Nintendo 3DS. While I haven’t played much of the other two games in the series, it was easy to spot the visual improvements straight away in Bravely Default II. Set in the world of Excillant, the game’s environment is rendered beautifully, and the game’s hand-drawn backdrops and panoramas make the Bravely Default universe look incredibly inviting and alluring. As soon as I booted up the game and finished the intro, I was itching to dive in and learn more about Bravely Default II’s world, its characters, and its stories.

Bravely Default II sees you playing as Seth, a young sailor stranded near the city of Halcionia after being shipwrecked on a nearby coast. After waking up injured on the beach, you’re rescued by Princess Musa and her aid Sir Sloane, a legendary swordsman and warrior. They take you back to the city’s inn and nurse you back to health. As you convalesce, you find out that Princess Musa and Sir Sloane are on a quest to obtain the four crystals of Excillant in order to restore the universe’s precarious balance. However, the tide quickly changes for Princess Musa: not long after you’re back on your feet, you find out that she has been kidnapped, and it’s up to you and Sloane to find her, obtain the crystals, and save the world of Excillant.

While I found Bravely Default II’s world and visuals intriguing, the story felt haphazard for me in places. At times it felt like the pacing was off, not to mention the fact that different characters speak in completely different accents and registers that don’t fit together very well. While one character sounds like he’s stepped straight out of a medieval novel, using pronouns like ‘thy’ and ‘thine’ non-stop, another one randomly has an Australian accent and frequently yells at people to ‘stop being such awful drongos’. Seth and the princess both have American accents, while one of the travel companions you pick up along the way sounds like a caricature of an Irish comedian. While plenty of games use voice actors with different accents, Bravely Default II felt like it had amped up the accents to such a strange degree that broke the immersion for me. 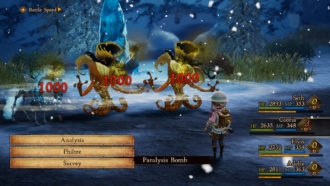 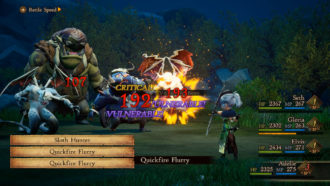 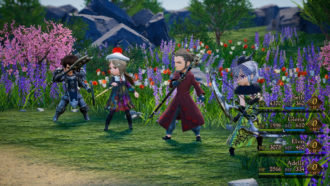 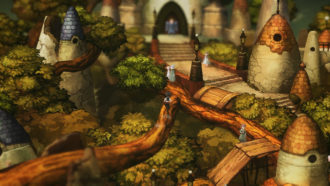 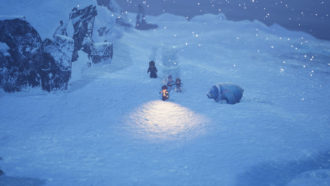 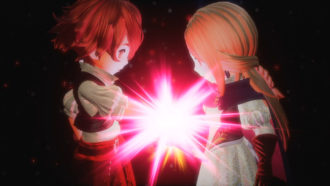 While I was unsure of the story, what really made me fall in love with Bravely Default II was its combat mechanics. Similar to titles like Chrono Trigger or Final Fantasy, combat is both party-based and turn-based, and each character comes with different kinds of offensive or defensive abilities in battle. What makes Bravely Default’s combat unique is its usage of the Brave and Default system. Apart from standard options in battle like attacking or using an item, characters can also choose to use the ‘default’ or ‘brave’ option. Picking the default option will allow a character to up their defences, skip a turn and get an extra brave point for the next turn. What these default and brave options essentially do is allow you to save up an action per turn in battle (by choosing ‘default’ and gaining a brave point), only to unleash saved up actions in succession whenever you’re ready to do so (by choosing ‘brave’ and spending your brave points).

Characters in your party can save up to three brave points, and the game even gives you the ability to have a negative brave point balance of -1. In other words, if you start battle without having forfeited your turn to save any brave points, you do have the option to borrow a Brave action that turn. As a result, though, your Brave Point balance will be negative, and you’ll have to skip the next turn to acquire a brave point and act again.

“While Bravely Default II’s combat system is quite complex and daunting at first, it livens up the game’s combat significantly once you get the hang of it.”

While Bravely Default II’s combat system is quite complex and daunting at first, it livens up the game’s combat significantly once you get the hang of it. Strategy-wise, the Bravely Default system allows players to plan extensively when it comes to battles and to choose to either throw themselves into the fray and deliver a flurry of decisive blows, or to buy themselves time to build up for an all-out attack. I was pleasantly surprised by the kind of complex tactical battle experience this system facilitated and found myself getting lost in engaging battle after engaging battle for hours on end.

In addition to this, each character is also assigned a main job and a sub-job in the Bravely Default II universe. These jobs can range from anything like a freelancer, to a thief, or a healer. Essentially, jobs function in a similar way to classic classes in strategy games and allow characters to use certain skills and abilities in battle. Depending on which jobs a character holds, they can play a huge role in battle, be it in offense or defence. Where jobs differ from the classic class system, though, is that they can be changed by using so-called asterisks: tokens that you can collect throughout the game by completing particularly difficult battles in the story. This, coupled with the large variety of enemies in the game, made for an incredibly satisfying combat experience. Unlike other turn-based tactical titles I’ve played in the past, I never reached a point where battles started to feel grindy or repetitive. Instead, the game kept me on my toes throughout.

In my eyes, these innovative combat mechanics are where Bravely Default II truly shines; offering up a world with a wide range of enemies and a refreshing take on the traditional tactical combat format, there’s a surprising amount of depth to each battle that will easily hook you, one turn at a time. While there’s a lot to wrap your head around initially, Bravely Default II will surely be a rewarding experience for strategy gamers who decide to persevere.

With innovative combat mechanics and an enormous variety of in-game enemies, Bravely Default II offers up an engaging strategy experience that’ll hook seasoned strategy fans. It also boasts gorgeous visuals, with hand-drawn backdrops and panoramas popping off the screen, making the world delightful to explore. While its story is slightly haphazard in places, the battles in Bravely Default II are sure to keep you on your toes. If you enjoy turn-based strategy titles like Gears Tactics or Final Fantasy and are keen on turn-based combat with a twist, Bravely Default II is not to be missed.