Inscryption is the latest game by Daniel Mullins, the Canadian indie developer well known for his games Hex and Pony Island. This is the first of Mullins’ games being published by Devolver Digital. We first got a preview of Inscryption in September and liked what we saw. Just like Mullins’ other games, Inscryption comes with an eerie atmosphere and a strange, creepy story. At the start of the game, you awaken in a cabin deep in a dark forest. You quickly discover that you’re being held captive by a sinister figure known as Leshy. To survive, you’ll have to take Leshy on in a series of card battles and emerge victorious.

While the game doesn’t offer you much context when you begin your very first run, you won’t be facing Leshy alone. After playing a few rounds, you’ll discover that a handful of your cards can talk. With a deck that mostly consists of cards representing animals, there are a handful of them — a stoat and a stinkbug for starters — that are happy to give you tips on how to defeat your terrifying opponent. In between card battles, you’re also able to stand up and roam around the cabin where, after a bit of sleuthing, you can discover other escape-room-style puzzles in your broader environment too. Solving them results in some extra tools that could mean the difference between life and death.

Inscryption’s story is haunting to say the least, but it’s mostly a card game at its heart, complete with unique card mechanics and several ways to build decks. Mullins first developed the base concept for Inscryption during the Ludum Dare 43 game jam. Back then, it was called Sacrifices Must Be Made and, after refining the initial game jam version of the game, Mullins released it on itch.io to positive acclaim. Shortly after the itch.io release, Mullins announced that a full version of Inscryption would be released on Steam at a later stage.

Sacrifices Must Be Made is a great insight into the core card mechanics of Inscryption. At first glance, Inscryption’s card mechanics seem familiar to other titles in the deckbuilder genre. Similar to games like Slay the Spire or Monster Train, a deck consists of several units, which all come at a certain cost in order to be played. However, in Inscryption, you’ll have to sacrifice other creatures in order to pay the cost for each unit. A unit card comes with a health and an attack stat, as well as a number of little red droplets in the top right-hand corner of the card representing the number of sacrifices needed in order to be played. One droplet means you’ll have to sacrifice one creature, two droplets mean two creatures, and so on. This is where squirrels come in: with no attack stat and just one health, these creatures solely exist to be sacrificed in battle to make way for more powerful units. You do have the option of sacrificing one of your units too, but this of course means you’ll lose the unit in question, resulting in a significant breach in your defenses.

A card battle takes place on a grid with a dedicated set of scales next to it. While you have one row to play creatures on, your opponent has two and has the added benefit of not needing to sacrifice creatures to play units. At the start of a turn, you’ll have the choice of two card piles to draw from: the squirrel pile (which consists entirely of — you guessed it — squirrels!) and the creatures pile, which basically contains all other units. Once you’ve lined up a number of attacking creatures, they’ll be able to deal damage to enemy units. Any unblocked damage is directly dealt to your opponent and is represented by gold teeth added to their side of the scale. Any unblocked damage dealt to you will appear on your side of the scales. The first person whose side of the scales tips over completely loses the game.

Later on, you’ll discover that any creature which dies by your opponent’s hand also yields bones. As you progress through the game, you’ll be able to bolster your deck with unit cards that require bones to be played instead of sacrifices. A few playthroughs later, you’ll also learn about sigils: certain perks units have based on a unique symbol on the card in question.

“I loved that Inscryption wasn’t afraid to take its time when it came to its mechanics.”

Card battle concepts are well-thought out and relatively easy to grasp. The only thing I found tricky at times was navigating the controls during a card battle and looking at the battlefield, the cards in my hand, and my draw piles. You can navigate each perspective by using the WASD keys, but at times it’s unwieldy and doesn’t provide you with a clear overview of the board. After a number of playthroughs I got used to it and was able to tolerate it, but it still didn’t feel quite right.

However, the controls are a minor trade-off for the wealth of story and card mechanics Inscryption has to offer. Even though initially Inscryption’s card game looks simple and straightforward, it packs a surprising punch. You wouldn’t know this from the game’s sparse first tutorial though, since Inscryption doesn’t come with a traditional tutorial as such. Rather, Inscryption’s core concepts are explained across several playthroughs, injecting a hefty dose of flexibility and curiosity into an otherwise fairly rigid overall roguelike formula. 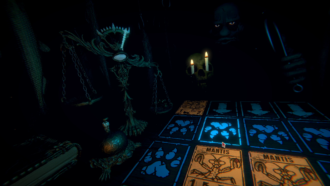 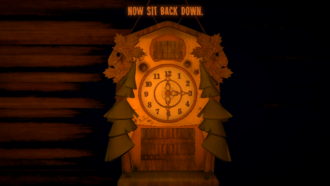 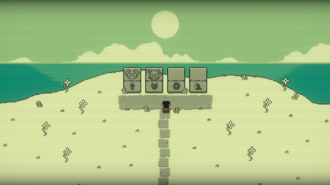 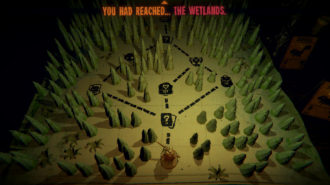 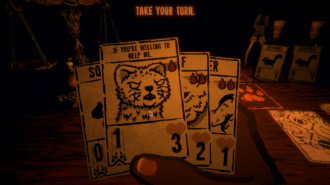 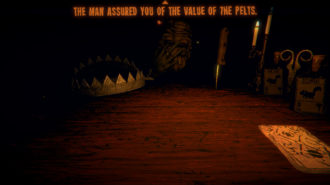 I loved that Inscryption wasn’t afraid to take its time when it came to its mechanics, and found that this only added to the game’s strange and puzzling story. While sacrificing squirrels was explained straight away, for example, it wasn’t until my second or third playthrough that I learned about creatures that require bones in order to be played. In addition to this, I only learned about bones through a specific talking card which required some detective work in the cabin. Similarly, sigils don’t come up straight away either. It’s only after a few playthroughs that Inscryption introduces these concepts, effectively easing you in gradually. As you progress through the game, you’ll also learn about other ways to craft decks and form synergies, which keeps things interesting. Just when I thought I learned everything about the game’s card mechanics, there’d be something new just around the corner.

This, coupled with the narrative, makes for a masterful story delivery. Inscryption paints an immersive world that will hook you in, one playthrough after another. While the game’s narrative definitely strikes an eerie note and is not for the faint of heart, it rarely tips over into being gory; instead, it keeps players invested through deep suspense normally reserved for stories like The Blair Witch Project. The story expands slowly, and new elements in the cabin are revealed to you with every run. The result was that I kept replaying the game, hungry for more explanations about the story and the mysterious figure I was battling against.

In this sense, I wasn’t surprised to find out that the story doesn’t end after you defeat the mysterious figure in the cabin, either. Without wanting to spoil anything, it’s clear that Mullins didn’t just engineer a spooky story without much depth to it but put a lot of thought into the world Inscryption is set in. You’ll find yourself being catapulted into a whole new dimension of the game, delving into the origin story of the characters and the cards you’re playing with. Without wanting to give anything away, I’ll just say this: if you’re persistent and enjoy a layered story and addictive card game mechanics, Inscryption will be an incredibly rewarding experience that will keep on giving long after you first think the ending is in sight. If that’s your thing, Inscryption is an absolute must-play.

On the surface, Inscryption is described as a card game, but it hides a lot more than just cards under the bonnet. Prepare for a layered story, thrilling surprises, and terrifying yet fascinating characters that will keep you glued to your seat. The game masterfully expands on the story playthrough after playthrough, providing a fresh perspective with each run. In this sense, Inscryption is a great twist on the otherwise repetitive roguelike formula that has dominated the deckbuilder genre in the last few years. This, in addition to the strange storytelling we’ve come to expect from Daniel Mullins, makes for a gaming experience that is not to be missed for card game and narrative game fans alike.