Nintendo has been keenly showing us trailers for Metroid Dread ever since they announced it earlier this year. They even went so far as to create a whole series of “Dread Reports”, providing a retrospective look at the Metroid series and how it all connects to this newest title. It sure seems like they were excited to show off Metroid Dread, despite the fact that they hardly need to try hard to sell a game starring our favourite bounty hunter. This is the first time in longer than 10 years that Samus has hit a console that wasn’t purely hand-held, so it’s certainly a special occasion. And I’m happy to say that Nintendo has done it justice.

Metroid Dread takes most of its gameplay from Metroid: Samus Returns, the 2017 remake of Metroid 2. It’s a marriage of classic and modern Metroid gameplay, meaning there’s plenty of exploration and challenging boss fights but with the benefit of 360-degree aiming and the melee counterattack. It’s made many improvements from what Samus Returns brought to the table.

Now that the melee counter has been built into the game from the start rather than being an addition to a game that didn’t originally have it, it feels a lot more natural as part of Samus’ arsenal. You can use the attack at any time, mid-dash or in the air, regardless of if an enemy is giving off that tell-tale flash of light. If you get the counter timing right, the enemy will be stunned, giving you a shot at a one-hit KO. If you don’t, well, you might still deal a bit of damage without having lost any momentum. The counter move is also incorporated into many of the game’s great boss fights and encounters with the E.M.M.I. robots, making for a very satisfying mechanic indeed.

The E.M.M.I. robots are part of the plot of Dread. Set after the events of Metroid Fusion, a transmission from a planet called ZDR reveals that a parasite X has survived Samus’ last encounter. The E.M.M.I. robots were sent to the planet to find the parasite, but unknown forces have corrupted them and they have turned hostile. They now patrol multiple areas of ZDR, and can only be destroyed with a specific weapon.

These E.M.M.I Zones make the heart race. The robots can sense your movement until you get an ability upgrade to cloak your movement, and even then it’s quite difficult to hide from them. They are terrifyingly fast, and if you’re caught, you only have an incredibly small window to counter the one-hit KO coming your way. This makes it all the more satisfying when you are eventually able to defeat them using the limited-use Omega cannon, a weapon that takes time to charge up and presents its own challenge.

Although I won’t say much more about how the story develops, I will say that I was pleasantly surprised with where it went. It doesn’t resolve all of our questions and even presents some new ones, which definitely suggests that Samus will be returning in another adventure (as if we ever doubted it). And although we can’t be sure, one of the Dread Reports makes a point to mention that previous Metroid games have had various different endings, depending on the collection rate or completion time. Many speculated that the same would be the case for Dread. Having completed the game only once so far, I can’t tell you if we were right, but… let’s just say I have reason to suspect it’s true.

Made for the OLED

Metroid Dread looks really nice. I mean, really nice. With the camera staying a fair distance from Samus (she usually only takes up a tiny section of the screen), the game could have easily gotten away with spending a little less time on the graphics. But I’m so glad they didn’t, because it looks stunning. Samus’ various suits all look very cool, and the attention to background detail is impressive, to say the least. Nintendo hasn’t been afraid to implement a more saturated colour palette either – some other recent Metroid games used a darker, almost grungy look in the name of realism, but I’m glad that Dread shows off the brilliant colours of Samus’ suit and accentuates the environments. I’m sure this choice was in part to complement the Nintendo Switch OLED, which launches on the same day, but it’ll look great no matter what version of the Switch you’re playing on.

“Dread shows off the brilliant colours of Samus’ suit and accentuates the environments.”

Dread is also generous on the cutscenes, without going overboard. Don’t worry, we don’t have a Metroid: Other M situation on our hands. Metroid Dread has struck the perfect balance between narration and silent storytelling. Cinematics don’t overstay their welcome, and are normally used to introduce a cool boss or to show off some badassery by Samus. The story progresses mainly through checking in with Samus’ computer system ADAM, like in Metroid Fusion. There are a few characters to be met out in the world though to help bring the story together, but most of the time it’s just you and the alien wild.

I only wish that was an amazing soundtrack to go with the stunning graphics. It’s certainly not bad – everything sounds fitting to the environment you’re in. The soundtrack is reminiscent of Super Metroid in its atmospherics, but sadly nothing that might have added to the long list of earworms the series is known for. In past games, Metroid has been happy to remix older themes for new areas (think the Metroid Prime series re-using classic themes from Super Metroid), but for some reason, they didn’t do the same here. Beyond using Samus’ iconic main theme, there’s nothing in the tracklist that stands out, which is a shame. 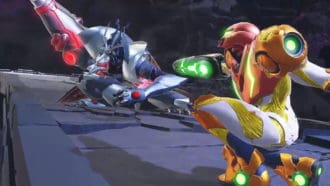 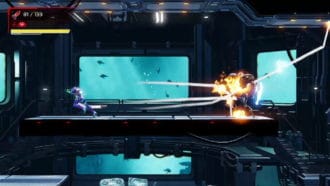 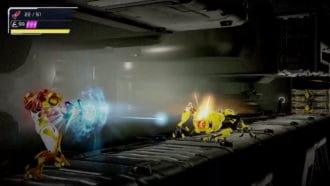 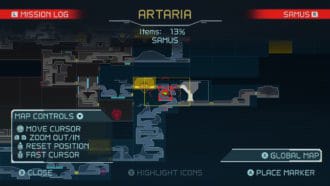 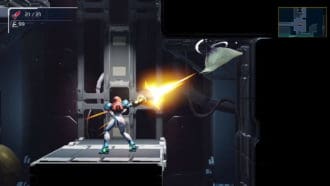 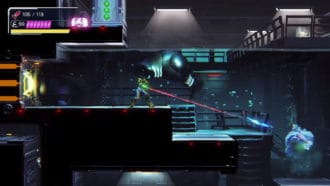 As far as the main gameplay is concerned, it’s simply a really solid classic-style Metroid game. You’ll explore room by room, searching for the path forward by looking for openings and checking for destructible blocks and walls. The difficulty curve never feels too much, and the bosses are difficult yet fair. Most boss fights include mid-action cutscenes that give Samus a chance for a melee counterattack for massive damage, which adds a lot of spice to the fights. As always, too, there is a host of optional energy and missile tanks hidden around the map for you to find.

If one nitpick must be made, it would be that the map can get particularly windy and maze-like. Dread avoids feeling too linear, which is certainly a good thing, but the backtracking can sometimes be a chore. Although you can always study the map to find your route, some unconnected rooms can be so close together that they can lead you astray. I also wish there were more than 6 markers you can place on the map – it’s needlessly limiting to the point of being almost useless. You can however highlight key objects on the map like energy or missile tanks, or even obstacles that require a specific weapon to get past. It makes them easier to see on the map, but it doesn’t know to leave out items you’ve already collected. an unlimited amount of markers would have been more useful.

The only major change from the classic Metroid formula is the autosave function. Though that might be standard for most modern games, with Metroidvanias it’s a bit of a different story. Part of the challenge comes from surviving until you can reach a save point. But Metroid Dread autosaves fairly frequently, like when you enter or exit E.M.M.I. Zones or boss rooms. And, like in classic Metroid games, the save points in Dread don’t recover your energy or missiles – there are separate recharge stations for that. I can’t in good conscience count this as a negative, as every time I loaded in again I was thankful that I hadn’t been set back. But it does mean that the save rooms are almost completely useless – the game might as well have allowed me to save anywhere from the menu.

Metroid Dread stops just short of being a masterpiece, not because of any one flaw, but simply because it doesn’t do much to push the series forward. It’s a perfect example of the series as it currently stands, but it just feels like it had the potential for more. All of its decisions are safe and expected. Beyond one or two reveals in the story, Metroid Dread didn’t do anything I didn’t expect.

A continuation of Samus’ story from Metroid Fusion, Metroid Dread excels as a hybrid of both classic and modern Metroid gameplay. The exploration and combat are top-notch, with satisfying boss fights complete with stunning graphics and mid-action cutscenes. It’s only a few nitpicks that prevent Dread from being a masterpiece, but that still means that it’s a must-have for Metroid fans. The future holds a lot of promise for Samus Aran!