Age of Empires IV is a real-time strategy game developed by Relic Entertainment and World’s Edge and published by Xbox Game Studios. The game was originally announced at Gamescom in 2017, and is the latest entry in the beloved Age of Empire series. The game comes with a campaign mode, a skirmish mode, and a single-player and multiplayer mode featuring PvP and co-op play. The aim of Age of Empires IV is simple: build up your base, raise your army, collect enough resources and food to sustain your military, and take out your opponents in order to be the last civilisation standing. It comes with eight civilisations you can play as: the English, the Chinese, the French, the Holy Roman Empire, the Mongols, the Russians, the Delhi Sultanate, and the Abbasid Dynasty.

For many strategy fans the world over, the announcement of the fourth game in the Age of Empires series was equally as exciting as it was daunting. The popularity of Age of Empires II is still booming to this day. Even though the title was originally released in 1999, its remastered edition is still enjoyed by many. The game still has an incredibly large and dedicated fanbase and even features a thriving esports scene centered around the title. As such, seeing the announcement of the fourth game, coupled with the lukewarm response to Age of Empires III understandably made many fans nervous. Would the developers be able to recreate and renew the magic of Age of Empires II? Or would it fail to hold up next to such a timeless classic?

It doesn’t take long to see that Age of Empires IV does hold up, and it does so well. Even at first glance, it’s easy to see that Age of Empires IV is visually stunning while also remaining loyal to the classic visuals of prior games in the series. With gorgeous graphics and eight biomes including deserts, forests, and subtropical landscapes, it’s easy to while away the hours watching your units and villagers toiling away. Towns, castles, keeps, and units are all rendered in great detail and look better than ever.

The real showstopper in Age of Empires IV, however, is its main gameplay mechanics. Its gameplay formula immediately felt like it was quintessentially Age of Empires, and even though Age of Empires IV comes with a brand-new campaign mode, every mode will look and feel familiar to Age of Empire veterans. You’ll still be building up your base, collecting food, wood, stone, and gold, and creating units to take to the battlefield in order to secure victory. Just like the classic Age of Empires II, there’s a strong focus on multitasking and making sure the actions of your villagers and your military strategy work well in tandem. Both multiplayer and skirmish modes deliver the classic Age of Empires experience for players who are keen to play with friends. With 17 different maps to choose from in skirmish mode, there’s plenty of variety on offer for people keen to take up the arms against other players or AI. Unfortunately, there’s no in-game mod support at the moment, but mods are slated to be added in early 2022

“…Age of Empires IV manages to breathe life into ancient history in an engaging and interesting way.”

If you’re a history buff, though, and just want to dive straight into single-player mode, the campaign in Age of Empires IV is not to be missed. Featuring four different campaigns delving into different historical scenarios, each campaign walks players through the key stages of historical battles, complete with cutscenes featuring modern day footage of historical sites and beautiful animations of in-game units laid over the top. You’ll be able to learn about military battles in medieval England, the expansion of the Mongol Empire, the rise of Moscow, and more.

While things could’ve easily become heavy-handed and didactic, Age of Empires IV manages to breathe life into ancient history in an engaging and interesting way. The combination of cutscenes, voice-overs and in-battle tutorial prompts not only makes for a dynamic way to learn the ropes of the game, but functions very well as a history refresher too. The early campaigns in particular provide a great entry point into the series for beginners: playing as the English in the Normandy campaign, for example, you’ll fight your way through key historical battles on the coast of England and in the heart of France. In the process, you’ll learn about the functions of villagers and harnessing different towns on the map to feed your army, as well as the importance, perks, and abilities of different types of units. Using situations taken straight from the pages of history, the campaign mode also introduces the idea of stealth attacks, siege equipment, and much, much more. 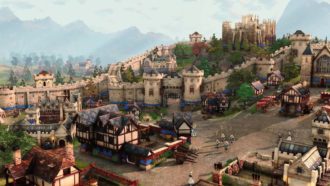 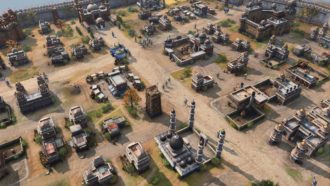 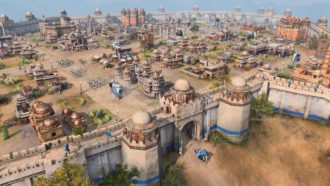 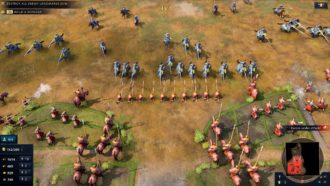 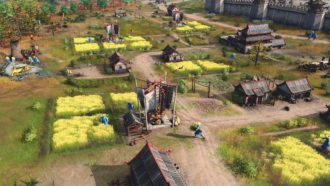 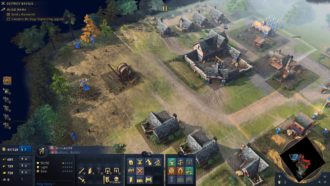 The campaigns and tutorials in particular feel new and fresh in comparison to their older Age of Empires II counterparts. While Age of Empires II is still a wonderful game, it might show its age when it comes to enticing younger demographics. Age of Empires IV doesn’t have this problem. Instead, it’s a polished springboard perfect for new strategy fans wanting to acquaint themselves with a classic gameplay formula. For complete beginners, the game boasts several training scenarios and dedicated tutorial campaigns under its Art of War mode. If you’ve never played a game in the series before — or if you’re a complete newbie getting into RTS — these tutorials break the gameplay down into digestible chunks, allowing you to learn the core mechanics at your own pace.

All that said, if you’re looking for more than the classic Age of Empires experience, you might be left wanting. While the fourth entry does come with new civilisations and new mechanics on the battlefield, including stealth and ambush attacks and siege weapons, overall the latest entry is loyal to the core mechanics you’ll find in Age of Empires II and III. And while for some fans that loyalty may be a good thing, others might prefer to hold on to their hard-earned cash a little longer and sticking to Age of Empires II, especially considering Age of Empires IV’s price point.

Overall, however, Age of Empires IV is the most modern and polished entry to date, with the classic mechanics of the franchise firmly embedded in its core. Whether you’re a seasoned Age of Empires fan or a brand-new one, chances are you won’t want to miss out.

Age of Empires IV delivers an absolute feast for strategy fans, offering several gameplay modes, a beautifully crafted story campaign, and stunning visuals. It may not come with a ground-breaking overhaul when it comes to its gameplay mechanics, but it does stay true to the tried and tested classic gameplay formula, which is sure to delight both old and new fans of the franchise.