Folks, it’s been a long time since the golden age of the platformer collectathon. We’ve had solid entries over the years, such as the Yooka Laylee series and last year’s return of Crash Bandicoot. Still, it’s safe to say the age of that type of platformer, encouraging you to tick over that 100% completion, is over. An itch to fill in that space is undeniably present, and Demon Turf, a 3D adventure in the space is just that. Even if its foundation isn’t always sturdy, it’s one worth checking out for those with nostalgia tinted glasses.

A Hell of a journey

Beebz (short for Beelzebub, if that wasn’t apparent), is our hero of Demon Turf. Situated in The Demon World, our young thousand-year-old protagonist is bent on causing some chaos. The Demon King rules over the land and the demoness wants a taste of that glory for herself. Your primary objective is to complete a level, collecting the provided battery you need to tick your meter ever closer to the fifty required for the final boss. It’ll take conquering of a number of turfs and levels before you take on the ruler, but that upwards journey is a joyous adventure itself, exploring many varied environments.

Each turf you visit has its own theme: a cityscape delving into a volcano or a snowy retreat and village.  Inside those turfs are sub-levels. While none of those settings is particularly unique, they are painted in a colourful and wonderful light. The city turf will have players wall jumping back and forth between close-knit buildings. Beach themed levels will have you ducking in and out of the ocean depths and islands. Characters are 2D sprites within a 3D world, akin to Paper Mario. Environment assets are blocky and cleverly basic reminiscent of the Nintendo 64. Perfectly prime for the exact audience Demon Turf is targeting.

These levels make for great playgrounds to familiarise yourself with the traversal move sets on offer. The first half of the game’s levels actually hit really well. Platforming goodness is aplenty, jumping dodging and dashing your way through various obstacles and jumping puzzles. In the latter levels, the design becomes more frustrating – largely due to a reliance on later gained abilities that are implemented weaker and halter your progression. 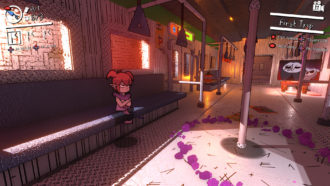 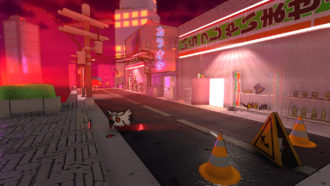 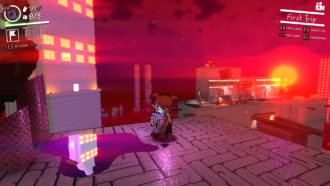 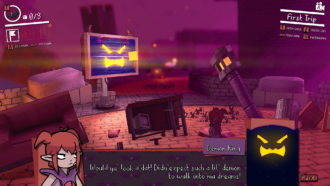 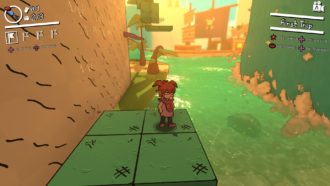 Wrangling with some great and not so great move skillsets

When you’re not going from A to B in a level, you’re navigating just how to get the various collectables hidden around the place, including cakes and other various sweets in your original or B run (return trip). A large way this is achieved is via mastering the move sets Beebz has on offer.

“…Perfectly prime for the exact audience Demon Turf is targeting.”

Starting off, the initial set of traversal skills is a fun one to wrangle. Beebz has a double jump (animating her into a bat upon the second leap) and a spin glide that, when combined together can make for some quick and precise means of moving around. One move that feels particularly satisfying and fluid to pull off is a long jump, seeing players cover plenty of ground, careening forward after jumping out of a spin glide. Again, not too dissimilar from its inspiration, such as the crouch somersault jump in Super Mario 64.

Gradually, you’ll unlock more skills. Great examples include a Hookshot to grapple and propel yourself to higher points. There’s also an ability to turn into a cobra wrangling itself into a wheel (yes, really) to speedily navigate impromptu racecourses or tight corners on a time budget. This is arcadey and fun as hell. While these many mechanics add for a fun variety of spinning plates, it can leave the younger audience feeling more left behind.

However, there are a few elements here I have a bone with. The combat on offer is a bit lacklustre. The spin that is also used for platforming traversal hardly makes a dent on enemies. The magical open palm spell cast does well for keeping yourself from being surrounded but doesn’t lock on the best. Most grating though is the later ability to take flight and transform into a crow, using gusts of wind to maintain height and speed. Its reliance becomes heavy near the end of the game and falls apart as hitting a point or mark never occurs just how you want it to.

It’s just a bit frustrating to see. Demon Turf sets up a lot of good ground for itself: here are some fun boss encounters in the game, complete with their own theme music. Players can place multiple flags, serving as checkpoints in their level to respawn at and make life easier. None of it can stop the parts where the going gets tough and platforming segments are chaotic and overcomplicated to navigate. Once again, not particularly friendly to younger audiences in this regard, either.

Main or side offerings are plentiful in Demon Turf. Players can engage in a round of a golf and soccer hybrid, pushing a ball with your many talents towards a goal before a timer runs out. An in-game arcade lets players enter in-universe video games, filled with more platforming challenges. Combat or platforming challenges with their own defined rules, beating a level under a time…there’s plenty to do. The list feels near endless and exciting for those looking to scratch that collectathon itch.

Along with just the hours upon hours of collecting ahead of you, developer Fabraz knows their audience. There are plenty of tweakable options in the menus, including heavy inclusion and encouragement for speed-running through the ability to pull up a game clock and chart times.

Serving all of this is a world full of angsty-teen techno-pop vibes. The available OST reflects this and has some real bangers in it. Want to see just how much of a rapscallion Beebz really is? You can engage in photography around the world, completing assigned tasks to snap and seeing some of the weird graffiti Beebz has completed around town over the years. Much of it is meme referential.

Built for 90s kids that previously found themselves in the Slacker generation, Demon Turf is rife with winks and nods to that very era and more recent examples. Gone of the age is games like Banjo Kazooie and Donkey Kong 64. At the very least, we have titles like this to remember such great times.

Demon Turf is a good game begging the eyes of those invested in the collectathon niche. Plenty of fun hours are on offer to watch those numbers tick up and pull off some tight and joyful platforming. It may waver in some of its later combat and ability design, also proving unfriendly for younger audiences. Though just as much forgiveness is issued when you consider how devoted the game is to tackling its genre. If you’re looking for a more modest and fun game to wind down the year, this is it.