The Last Stand: Aftermath is the newest entry of Melbourne-based developer Con Artist Games’ The Last Stand series. The Last Stand: Aftermath, crowdfunded via Kickstarter, pulls the series in an isometric roguelike direction, putting the player in the shoes of an ultimately doomed survivor as they make their way across the country scavenging for supplies and salvation for the remnants of humanity. The game ultimately works quite well and has some positive aspects going for it, however, its limitations and repetitive gameplay loop prevent it from reaching its potential.

The Last Stand: Aftermath takes place in the, well, aftermath of a catastrophic zombie plague that has infected 95% of humanity. The remaining 5% are immune, and unusually for a zombie apocalypse setting, you aren’t playing as one of them. With the remaining human survivors bunkered down in a camp known as The End, you play as an infected recruit who has only days to live. Your doomed survivor must make their way west towards the H.E.R.C. Blockade and access the valuable supplies hidden within.

I found the premise quite refreshingly dark as far as roguelikes go; humanity is reduced to sending their troops as cannon fodder against the zombie horde, not unlike how the zombies throw their superior numbers at humanity. Your character is already dying, and the anti-viral medication you are given can only stave off the infection. When your protagonist inevitably falls, you simply pick up from the beginning with someone new and start the voyage again. 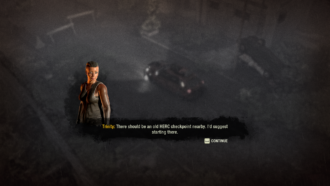 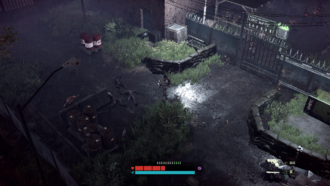 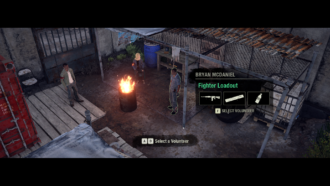 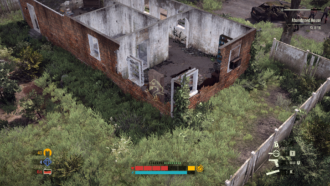 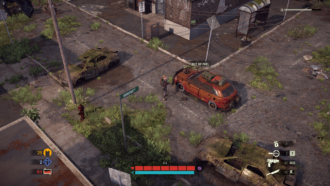 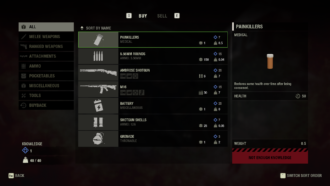 This premise also plays into how long-term progress is accumulated. Although every new run starts off with a new protagonist and barebones equipment, you can acquire Supply and Knowledge resources through scavenging to assist future runs. Supply can purchase additional equipment and unlock new kinds of survivors to play as, whereas Knowledge unlocks permanent buffs, such as improved movement speed and infection resistance. The rate of accumulation of these resources is pretty generous, providing a regular sense of long-term progress. Even if you don’t get far, your efforts can hopefully give the next infected survivor you play as a better chance.

The isometric gameplay works fairly well; you can obtain a variety of melee and ranged weapons, which break down over time. At each stop your car runs out of fuel, forcing you to wade through the zombie horde to scavenge for fuel and other resources. A sense of risk vs reward permeates the experience; much of the time you can find more fuel than you really need, meaning that leaving your car at some stops is unnecessary, but may provide valuable weapons or consumables.

“Unfortunately, The Last Stand: Aftermath suffers from a lack of varied objectives and enemies.”

While many of the game’s roguelike features are quite good, the actual combat is pretty repetitive. A good roguelike provides variety and keeps players coming back with the randomness of different scenarios each run. Unfortunately, The Last Stand: Aftermath suffers from a lack of varied objectives and enemies. You only encounter zombies, of which there are only a few different types.

All enemies attack by rushing towards you to attack you in melee, which while appropriate for a zombie, means that you’re fighting most enemies in pretty much the same way. Many games featuring zombies, such as The Last of Us or Left 4 Dead, compensate for this by throwing in human enemies or zombies that can attack in different ways. The Last Stand: Aftermath only has a handful of zombie types who behave very similarly, meaning that the encounters start to blend into one another pretty quickly, regardless of your character’s loadout. The addition of enemies that could attack at long range or had different tactics would have made a big difference.

You also acquire unlockable mutations throughout each run as you are damaged by zombies. While this concept is pretty interesting, the impact on gameplay is unfortunately somewhat disappointing. The fact that your maximum health is permanently reduced when you obtain a mutation feels like too big a trade-off compared to the benefits.

Furthermore, the mutation powers themselves only add somewhat underwhelming passive buffs, like improved melee damage or chance of inflicting status effects. Some active effects, like night vision or some kind of new melee attack type, would have better sold the idea that your character is gaining strange mutant powers, and felt more empowering to obtain. As it stands, the mutation system isn’t unwelcome, but it could have stood to mix up the already fairly repetitive gameplay a bit more than it does.

The Last Stand: Aftermath is an engaging zombie-themed roguelike that unfortunately runs out of ideas too fast. The steady voyage across the zombie-infested post-apocalypse whilst scavenging for scarce resources is a tense and fairly enjoyable experience, but only for a while. As a game built around repetition and short playthroughs, The Last Stand: Aftermath recycles enemies and environments too frequently for the amount of time you replay them. The addition of mutations and new player equipment load-outs are a nice touch, but ultimately don’t do enough to mix up the experience. Rewarding progression and an engaging premise mean the game is certainly worth checking out for fans of roguelikes and zombie games, although it might not hold your attention for very long.