Krome Studios are back with a collection featuring their biggest franchise, Ty The Tasmanian Tiger. The first two games have been given a HD remaster for modern consoles backed by a passionate Kickstarter campaign. The game is a 3D platformer initially released in the early 00s that heralds back to platforming icons like Crash Bandicoot, Spyro the Dragon, and of course Mario and Sonic. Albeit this time around, a twist injects this game with a ton of Aussie humour and larrikin antics that are too adorable to make us local folk cringe, instead making us grin as we appreciate the love and passion put clearly into this world by the developers.

Ty, the hero of the story and the last Tasmanian Tiger in the Australian Outback, must recover five hidden talismans hidden throughout the world to open up the Dreamtime and get his family back from Boss Cass. Things don’t turn out so simple though, as each talisman is hidden and can only be revealed by finding thundereggs in each area. Players collect a total of 17 eggs before each portal opens up to a hilarious boss fight, and Ty recovers the talisman. Once all the Talismans have been collected, they will power the machine to open up the Dreaming portal.

There is plenty of old-school Aussie humour here with characters spouting lines like “Bonza,” and you will hear the word “Mate” used way more than it should be – but it’s too charming to be annoying. This game really excels in its supporting characters, and their design with Maurie the Sulphur Crested Cockatoo and Julius the Koala voiced by Terry Gill and Neil Hunt, respectively, outstanding with their voice work.

This is your standard platformer with tons of items to collect. Ty’s primary weapon is a boomerang, and you can collect different kinds of boomerangs with different abilities, strengths, and aesthetics. While this is a fun endeavour, regrettably, the weapons effectively do the same thing, so the variety of the experience can be a little disappointing. One swoop of the boomerang and the enemy goes down, a far cry from the annoying platforming challenges of the recent Crash Bandicoot remaster; the difficulty of this game is as easy as it was when it was released. Krome Studios have added in a Hardcore Mode that does add more challenges when taking down enemies, particularly the boss battles that are easily eradicated after one or two boomerangs.

“Visually the HD makeover is stunning in handheld; the outback worlds shine in clear and crisp graphics.”

Visually the HD makeover is stunning; the outback worlds shine in clear and crisp graphics. The different levels showcase the desert, underwater stages, rainforests, and snowy mountains. I played this on the Nintendo Switch OLED and really noticed the difference when playing side by side on the OG Switch. HD rumble is an excellent addition to this platformer; the control of Ty with the left thumbstick and the camera with the right helps with some of the camera issues from the original release.

Included in the collection is the wildly different sequel Ty 2: Bush Rescue, s game which goes out of its way to be so completely different from the first, it is almost unrecognisable. Set shortly after the events of the first game, Ty is pulled back into action when the frill necked lizards have figured out how to create cars and tanks and use them to invade and break Boss Cass out of prison. Unsurprisingly, Ty now knows how to use vehicles as well as teaming up with the old gang to re-capture Cass and to help man the new Bush Rescue station the citizens of the town have helped to start, in a response to the events of the previous game. 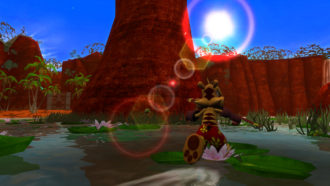 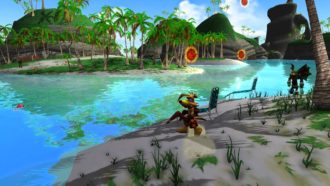 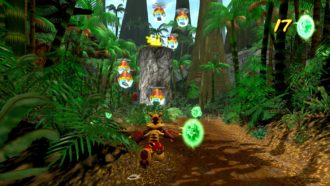 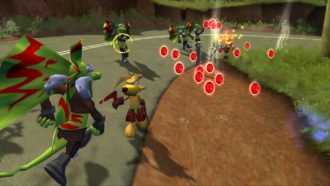 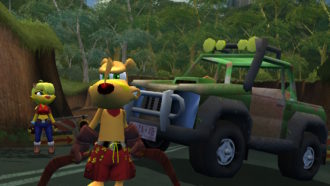 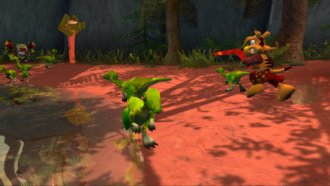 After a spectacular action packed intro, the game settles into an open world adventure that allows you to explore the bush setting and interact with a slew of new NPC’s with various missions and fetch quests. This is a major shake up from the first title in the best way possible. It still has the Ty universe look and feel but with a radically different way to play that combines action, vehicles and a kart mode. When the main story kicks into gear you travel around the map on a buggy stopping at different waypoints along the way to complete a variety of different missions for the town and its residents.

There are a large amount of vehicles to use in this game and these are incorporated well through each task. You take control of submarines to ward off hoards of sharks, you fly helicopters with large amounts of water to put out fires (truly iconic!) and the mech missions where you climb aboard a behemoth and blast waves of frill-necked lizards, ninjas and other mechs. The game really does throw a lot at you in a wide variety of different things to do that it never feels boring or repetitive.

While the vehicles are fun to play around with, they are not without their downside. Some of the controls are clunky and really feel their age. Using the map to try and navigate around also feels rough compared to todays standards. You have to press the Pause menu and scroll across to access the map, which becomes arduous if you are chasing specific missions to unlock a different area. Honestly the best way to play this game successfully is to just wing it. I had the best time just randomly finding missions and following the trail to unlock new areas on the map and diving into different stories.

Like the previous game you collect Opals to unlock and purchase more boomerangs. The ability to switch between them is quick and simple with different functions like boomerangs that blast through barriers, and my personal favourite being a teleporting boomerang that opens a portal directly to a crystal. It is this that will motivate you to spend as much time as you can collecting opals (there are about 20 in total).

The biggest theme that echoes across these two titles is the difficulty. Ty 2 again is extremely easy to play and the addition of the hardcore mode is a welcome relief if you want to increase the challenge, however there is an large difference from the original game mode to hardcore mode, so there is no real sweet spot to get a good balance. The camera is still a problem in this game, but if you are playing directly after the first one like I did you won’t notice it as you are used to it by this stage.

The HD upgrade again runs smoothly on the Nintendo Switch, particularly in handheld mode. The frame rate is locked at 30 FPS and works in well with the colourful visuals. I ended up playing most of this in handheld mode where the graphics pop, but noticed a huge different when docked. This is where you can see the glaring issues with the remastered edition. Things look grainy and you can follow the lines and shapes that are sorely in need of some more love to truly shine on next gen consoles.

Included with the collection is Ty Kart. A bare bones karting experience that is similar to Crash Nitro Kart, Mario Kart but has been included in this package (attached to the second game). You can access it from the main menu of the game and it features a range of different courses, collectables and vehicles to playthrough. There is even a multiplayer mode so you can play with a friend (the best way to play!) It is great in short bursts and I did find it a lot of fun to play with my partner; the controls are similar to vehicle handling in Ty 2: Bush Rescue and there is enough here that they could have sold it as a separate game, so it’s nice to see it here.

Ty the Tasmanian Tiger HD Collection successfully updates the first two games for a new generation of gamers. The endearing characters and story shine through with the beautifully rendered HD world Krome Studios have created, but it really is best played in handheld mode. The voice acting is just as great as it was on its initial release, and completionists will relish in the many collectibles throughout the games. Further fixes to the camera angles and underwater controls would have elevated this game further, and some of its elements feel outdated and a bit too easy, but this is a solid HD update to a collection of classic games that will never go out of style.

Alaisdair spends whatever free time he has playing as many video games as possible, binge-watching random TV shows and giving never-ending cuddles to his kelpie/corgi Cindy.