Voice of Cards: The Isle Dragon Roars Review – An intriguing and great side journey

Yoko Taro, most known for helming the NieR series, is certainly a unique figure in the gaming sphere. Often considered an auteur (something wrought with its own problems itself), entries that this man works on often have a unique style to them. NieR Replicant ver.1.22474487139…, released earlier this year, for example, is something I describe as “by weirdos, for weirdos.” Voice of Cards: The Isle Dragon Roars is a new RPG that he is responsible for both co-writing and creative directing. Bringing across some of this talent from the prior games, this is an experience that is more palatable and approachable, while still having that beloved flare. This is something absolutely great that even with its concessions, is well worth your time.

So the story goes

Voice of Cards: The Isle Dragon Roars features your typical fantasy story for the most part. A lowly hero with the naming of your choice (or Ash if you opt for the default convention) has been summoned on a call to arms. Whisperings come from the royal capital of a dragon that is causing havoc across the lands you’ve found yourself in. Your money-hungry hero sees the opportunity to hunt such a dragon to obtain riches and prestige. Before long you’ll gather a number of friends and party members to help you on your venture. You’d be forgiven if you found the story slow going at first. It is. Though if you stick it out, you’ll be rewarded with a lovely little story.

Voice of Cards isn’t a particularly long RPG. I wrapped my time with the seven chapters in about fifteen hours. This thankfully means that despite some safe fantasy narrative conventions, most of the meat is great. Interesting figures such as the Ivory Order are key; they serve as a more acclaimed and proven trio of adventurers that have simultaneously taken the quest to eliminate the dragon. Every so often, they’ll show up and be bullish to your party, making for some funny and cheesy conflict. However, the Ivory Order, along with the world of Voice of Cards, are not all that they seem. Quite a few reveals occur late to mix things up and pleasantly surprise you. I won’t spoil, but as such these left a stronger and more lasting impression than the prior time spent.

“…here we have some of the NieR head’s best writing yet, including the return of fantastical music and design once more.”

While you’re exploring new territories, meeting a number of friends and foes, it’s the familiar flair that’s keeping you going in the slower moments. In Voice of Cards, players control a party of three, with two functioning as your additional reserve members you can swap in and out at any time. Through character interactions, weird or otherwise, is where a lot of the fun and heart shines in-game. Some of your party members you’ll pick up along the way include kind monster Mar, the vengeful witch Melanie and Bruno, a battle-hardened and incredibly built nutritionist in scant clothing. Plenty of opportunity presents itself for this weird cast of characters to bounce off each other in charming ways, like NieR before it.

One instance saw me chasing a young girl through a forest. She snatched a flute-like instrument from me and insisted with utmost importance that she be the one that possesses it… despite the fact that every time she’d flee with this instrument she’d be playing it horrifically. This girl later became an invaluable member of my team, known as Ridis. Wandering around the sprawling lands Voice of Cards has on offer, there’s plenty of time to catch up with many curious figures. Plenty of male and female characters, NPC or otherwise, are designed equally as, for lack of a better word, horny (thanks Kimihiko Fujisaka). These people look to have intriguing stories to tell. Though more often than not they can hilariously be boiled down to just absolute weirdos in this world. Delightful. 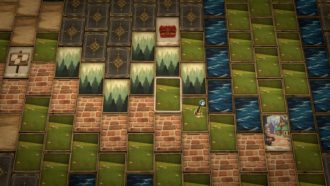 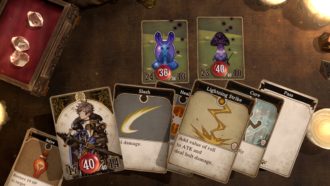 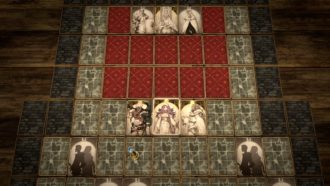 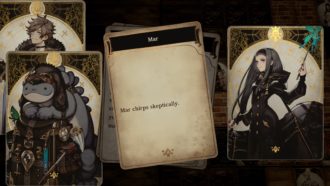 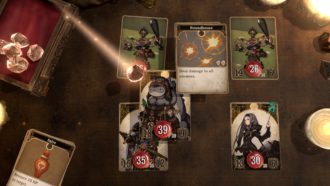 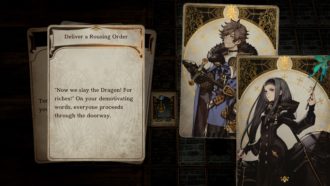 The potential for further world-building is exciting

Voice of Cards: The Isle Dragon Roars is absolutely going for that roleplay feeling. The aforementioned Kimihiko Fujisaka has a lot to thank for this attempt due to the design of the characters and world. A card-based tabletop experience is run. Every character has their own card that is displayed to you on screen as they converse with the other cast members. Every tile or inch you traverse is a card in itself, with unexplored tiles or locales cleverly displaying the back until nearing such space flips the card to its face side. What this looks like in practice is players controlling a pawn piece, slowly charting a vast world, maybe uncovering a mountain or large body of water that’ll block their path, while the potential of uncovering dungeons, foes and towns of refuge reigns throughout.

Narrating your journey is a figure akin to a dungeon master that delivers moments of tension and joy throughout the narrative quite well. No additional voice actors are provided to depict the cast in your tale, nor does your master put on different afflictions. He gives it to you straight. While more variances in voice acting would have been welcome, it’s not missed too much. Your lead here is entirely convincing, often too being baffled by the weird individuals.

There’s a decent amount of elements, activities and the like to get your toes wet in some good old fashioned fantasy roleplaying. The soundtrack is backed by NieR composer Keiichi Okabe, once more offering haunting and engaging orchestral pieces that come with fictional language that sounds almost Latin or Celtic in nature. This does plenty to immerse you in the world you’re traversing. Additionally, players can visit towns and get to know the locals, shopping and selling at places to better their gear and items. Even an in-universe card game is on offer. Here, players can lose some time (in local battles or against A.I.) in a fight of numbers, trying to rack up points through pairing or grouping higher scored cards. It’s genuinely also a fun distractor that I can see myself revisiting from time to time. Not a needed additional gameplay moment by any means, but with other RPGs like The Witcher 3 pulling off a similar feat with Gwent, it sure is welcome.

However, all that roleplaying still has a ceiling. Due to its limits, Voice of Cards can’t help but feel like a small project made on Yoko Taro and the team’s off-time. What I’m talking about here is that though curious and well designed, the NPCs (be it villagers, journeymen or shopkeeps) are repeating. The same can be said for the randomly scripted events you’ll encounter throughout. While these are joyous, including overhearing the location of a treasure from some thieves or rolling a die to avoid receiving damage from some nuts falling out of trees, you’ll see them often. It’s hard to indicate whether this repeating nature is due to a lack of time or confidence in these aspects, but these are quite prevalent in comparison to all the scene-setting that Voice of Cards does so well. I can only hope if they do a follow up to this, direct or spiritual, they take the time to further flesh out these parts.

Not quite re-inventing turn-based, but celebrating it

As mentioned prior, turn-based combat takes hold here. Throughout the party’s exploring, encounters both random and scripted (more often than not skewing towards the former) will thrust players onto a separate mat which serves as the battlefield. Three of your five party members will take a stand here against the foe. What occurs in these instances is undoubtedly your standard turn-based affair. Still, it certainly is under a pretty coat of paint.

Party members will be able to use one of four abilities when it comes to their turn. As a staple, using spells that exploit your foes’ weakness is the winning formula here, but that won’t always be available at all times. Gems, actually shown in a case within the scene, dictate which abilities you can and can’t perform. While you get one gem per character turn, meaning base abilities are never a struggle, heavy hitters definitely are. This is where the most thinking is required, planning when it’s appropriate to perform a reserved attack or go all in. Of course, various items can aid and abet this also.

Some moves also incorporate a dice roll, be it your typical six-faced one or D10. These are used to determine how impactful, spells and attacks are, potentially coming with other effects other than just higher damage. An ice spell issued by Melanie for example provided a freeze on foes, but only if I rolled higher than a set number. Succeed in this, and the freeze will not only hold a foe for a turn or two but also deliver double damage upon the next status shattering hit.

As a nice touch, each offensive action you take in battle has its own animation. Bruno has a Bodyslam move that will see his card physically lift up a foe’s and slamming it back down onto the table for damage. Occasions have cards looking really scratched and torn up when they’ve suffered real damage. Cards will bend and fold, dancing around your battle screen in creative and engaging ways, adding all the more flair and engaging effect. Rounding this off, readability in the cards is concise, always avidly communicating just what a move will do or how much health, defence or attack a character has at any given time.

The only downside that comes with all this flavour is that for a majority of the runtime, combat is pretty breezy. It’s only in the final chapter or two where more consideration is required. Suddenly not all your go-to’s work. Most moves will on their own be ineffective. It’s here that I was taken on a bit of an awkward turn and my total hours spent went a little longer than it otherwise would have. This change took some time to reconcile, having to now pay more attention to which cards work best with which characters, stock up on more revival items and the like. I only wish this depth remained throughout more of Voice of Cards. 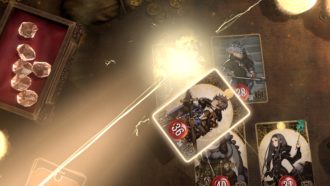 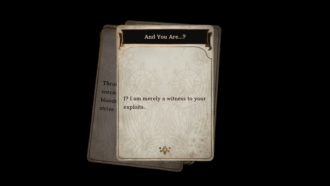 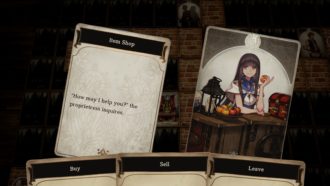 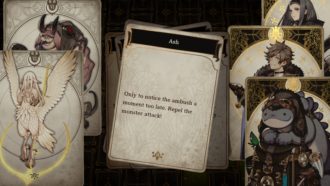 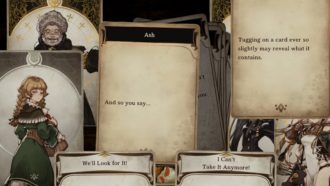 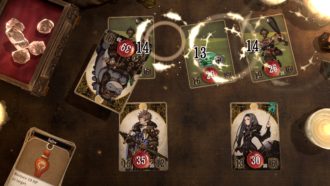 With all that being said, Voice of Cards: The Isle Dragon Roars is a great escape despite some of its need for fleshing out. None of the concerns are that glaring and if anything can only be improved upon should they follow up with another similar experience. I hope such risks and somewhat oddball games continue to be worked on in-house at Square Enix. It’s what’s resulted in other greats this year, such as Dungeon Encounters.

Voice of Cards: The Isle Dragon Roars is a great little gem to come out of this year. Where NieR is a good series though not quite for me, this absolutely is. The team have created a true sleeper hit that is well worth seeking out for NieR or fantasy adventure fans alike. The music and wondrous exploration on offer are engaging throughout. While other limitations in roleplaying are noticeable, they’re never enough to rob you of your enjoyment. What’s here is some clever and wonderful writing, a charming cast of characters and another weird world worth delving into. Yoko Taro and the team have done it again.