The Farming Simulator series has been growing its crops for quite a while. Spanning an impressive fifteen mainline game releases, some mobile entries, and even a real-life tractor controller, the franchise has certainly grown a lot over the years. But what does the “simulator” part bring to the table that makes it a worthy play over other farming titles with a less realistic approach? Surely the harvest is just as bountiful, but the grind of learning how a realistic simulator game works is a lot more involved than many give it credit for.

As a gamer, I pride myself on being keen to try games from any genre. My exposure to simulator games has usually been those quirky ones that are less about realistic situations and more based on awkward impositions. Games like Goat Simulator provide the simulator aspect while still allowing the player some semblance of agency and, well, fun.

Farming Simulator 22 gives you player agency but it feels rigid. While controls and concepts appear simple, there’s a learning curve to the game that feels ridiculous and this entry in the series offers no hand-holding. Maybe it’s part of the simulation experience to struggle to learn how to plant new crops and harvest while constrained by your bank balance. Maybe the real message in the game is how hard it is to be a farmer. I should know, considering my family primarily comes from a farming background, but even so, I can’t help but see the game as a rather hollow rendition of a lived experience. No matter the case, I think I’d rather jump into video game farming over real-life farming.

For those who aren’t familiar with the games, Farming Simulator 22 is basically a farming sandbox game that allows you to run a farm how you want (technically). It contains basically every machine necessary to plant whatever crops you wish. When you aren’t harvesting, you can look after your farm animals and sell produce. As far as games go, think of it as a more intense, devoid of story Stardew Valley. The game’s whole purpose is to allow you to produce what you’d like on the farm with only money and seasons being your restrictions.

When I began playing Farming Simulator 22, I was hoping I’d find the experience enjoyable despite having issues with Farming Simulator 2017. I assumed a series like this would naturally grow and improve over time but the game feels a little too familiar considering the time between the last time I played the series and now.

When starting a new farm, your options are limited. Career mode functions with 3 difficulty settings that alter how the game plays. ‘New Farmer’ is the easiest and starts you on some land with your own equipment ready to go. ‘Farm-Manager’ is the medium difficulty option that starts you with money but no land in a stable economy. ‘Starting from Scratch’ is a brutal challenge, offering a break-back economy and a hefty credit loan from the bank to give you a painfully realistic experience. After picking the location for your farm, you’ll be treated to the lightest of possible tutorials, if you can even call it that.

“…the tutorial aspects of the game are not nearly as well implemented as they should be.”

Even as a player who’s played Farming Sim games before, the tutorial aspects of the game are not nearly as well implemented as they should be. I found googling processes in the game the only way to grasp not only what machines you need but how you go about buying seed and knowing which selling point is appropriate for the harvested yield. Sure, the game does contain a help section in the menu, but it’s still not enough. It gives you a very rudimentary understanding of the systems, but the moment you open that shop tab of the menu, all that knowledge leaves you and you’re almost certainly overwhelmed as a new player.

There are some cheeky ways to circumnavigate the lack of money the game bestows upon you at the start, though it would be nice if the game was more accommodating from the get-go with options to customise how you begin your farming adventure. It feels severely limited in this respect despite the fact that it’s a simulator built around reality. There should be inbuilt game options that allow you to start with more money, owning all land, or other such features. Furthermore, having these options separate from the difficulty of the game would allow further freedom to set the pace of the game to suit the player. For myself, I’m perfectly happy to start with more money and a small portion of land that allows me to grow and slowly build up my operation and not overwhelm myself.

When you do finally decide what you’re going to do, the game does have a satisfying flow as you work to goals and set the processes in motion. Hiring workers to do the work for you is awesome too. It means you can jump off the tractor and watch the work get done for you for a small fee. This is the strength of the game, in allowing players to farm however they wish and in doing so let you take control of huge implements as you work the land. It’s so thrilling to lease a great big tractor and buy a Kompaktomat 1570 Max Cultivator and unfold that on a huge field and get to work. Working the land is an experience that is quite awesome to behold.

Similarly, farming the animals in the game is quite rewarding, but again, some assistance would have made this process far less confusing when you first begin. In one instance, I couldn’t work out how to feed the cows I’d bought until I later discovered the food I had gotten for them was completely wrong. While I was curious about starting an animal production operation, I ended up selling all my cows out of sheer frustration.

What did take away from this experience was the rather awkward camera placement. When in the tractor, the camera felt too close to the machine, so even when you’d turn the view, your perspective still felt cramped. While the first-person camera is a novelty in perspective, driving for prolonged periods when not using a hired worker is tedious to both do and look at.

I also can’t help but feel the Farming Simulator series would benefit from more story elements. How are there no random events, for instance? I literally grew up on a farm and every day there was something random to throw a spanner in the works and this game skips over that entirely. Other simulator games incorporate random events because, at the end of the day, this is a sim game. The whole point is to simulate what might happen. 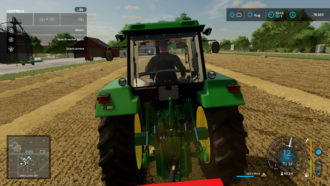 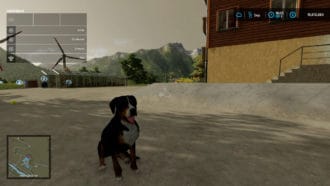 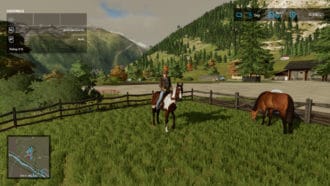 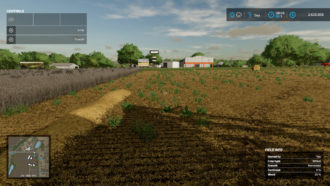 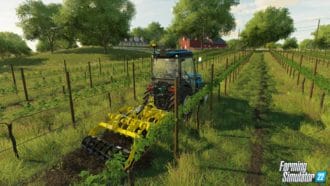 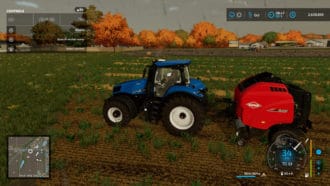 While I wouldn’t normally find this impressive, the game brings a lot of real-world brands into it which enhance the realism of the game. The massive machine roster includes over 400 machines and tools from more than 100 brands. The level of detail in this game is unparalleled to other farm sim games. In theory, you could play this game and then go buy the exact same farm machinery at a dealership. I think the most iconic is the bright green John Deere machines that stand out in the fields. It’s quite a hearty touch, including real-world machinery in a game like this. This would certainly be engaging for folks who know a lot about farm machinery despite how specific of a niche it is. It’s also likely that those exact same folk wouldn’t be impacted by the lack of tutorials I noted earlier in the review. For those diehard farming fans, Farming Simulator 22 is likely already in their possession and offering a great deal of enjoyment.

For me, to properly enjoy Farming Simulator 22, I’d like to see it embrace a more varied approach. Like a fresh farm, this game does have loads of fantastic potential, but despite the seeds laid by previous entries in the franchise, I don’t see much growth here at all.

Farming Simulator 22 is a beefy farming game that brings realism at the expense of inexperienced player enjoyment. It’s a machine built on the agricultural industry that forgoes any story in favour of hard work. It’s a simulator game that understands the assignment but isn’t at all intuitive in how it allows players to begin new farms. With proper tutorials and allowances, this game would appeal to players beyond its dedicated niche. Once players are able to tackle the learning curve, they’ll discover enjoyment can be found through persistence.