From a MOBA, to a card game, to an auto-battler, and even an exceptional Netflix television show – the League of Legends (LOL) universe of Runeterra continues to expand and pique interest. Now, with the launch of Ruined King: A League of Legends Story, the world of Runeterra once again grows into new territory. Riot has been excelling with the publishing and development of new multimedia projects, so how does this turn-based RPG stack up?

Ruined King plays a bit like a mixture between a JRPG and a Diablo-style ARPG. When not in battle, you’ll control a set of characters as they explore the overworld, communicate with NPCs, find loot, and continue on their quest to thwart evil and uncover the mystery of a deadly black mist. Unlike Piltover from the Arcane Netflix animation (which everybody should be watching!), Ruined King instead explores the rusted and cutthroat ports of Bilgewater as well as the tainted and evil lands of the Shadow Isles. A perfect landscape for a brooding and foreboding supernatural adventure!

Ruined King: A League of Legends Story is a game for the fans. LOL players will see a lot of known characters, even ones whose reasons for being in Bilgewater are tenuous at best. And whilst it’s really fun seeing these characters and locations realised in a new way, I can’t help but feel the game wouldn’t be as engaging for players new to the League of Legends universe. It’s not necessarily a bad thing, developing something for the fans, but it’s worth knowing for gamers fresh to the Runeterra lore that you won’t be getting something as immediately accessible and engaging as the Netflix animation.

“Ruined King: A League of Legends Story is a game for the fans.”

Ruined King will have players take control of a set of known characters who unlock and join the party slowly over time. Miss Fortune and Illaoi are cornerstones to the narrative being explored, with Braum, Yasuo, Pyke, and Ahri eventually joining the roster. Only three characters can be utilised at any given time but switching between the full cast is fairly easy, and each offers their own distinct playstyle that’ll cater to different players. It’s great watching these characters interact and fight. League of Legends at most facilitates one-liners and small quips between characters, but here we see more fully realised personalities that feel like natural expansions on the templates already set out. The more serious and spiritual tone of Illaoi juxtaposes endearingly with Braum’s more goofy yet overwhelmingly protective nature. It’s fun to see. Though again, this praise comes from a pre-existing LOL fan, and I don’t think a newcomer will enjoy it at the same level. 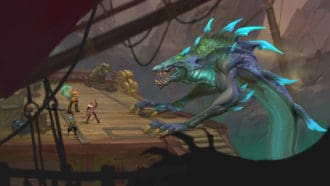 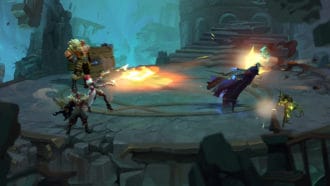 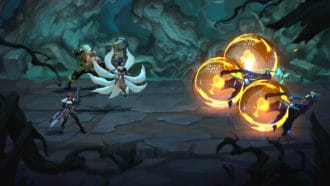 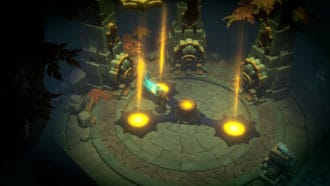 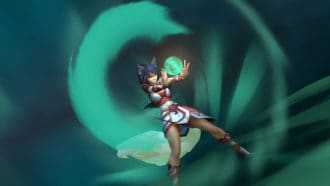 We’ve seen the storytelling capabilities of Riot and their partners in LOL cinematics and the Arkane Netflix show (this is the last time I’ll bring it up, I promise). Whilst some of that storytelling prowess bleeds into Ruined King, especially in its more engaging cinematics, overall the game narratively falls shorter than some of those previous lofty achievements. The narrative of Ruined King is perfectly serviceable, but it doesn’t feel like it’ll be the reason to jump into a game like this. What will hook you is the strategy made available through the game’s turn-based combat, fun character synergies, and the ability to tinker with skills, upgrades, items and more.

Enemy encounters are littered throughout Ruined King and play a big role in progressing through the game. Touch a foe in the overworld and get transported into a turn-based combat sequence. You can even start these encounters in your favour by hitting the enemy in the overworld with an ability that will damage and potentially cause a status effect at the start of the turn-based battle. At this point, you’ll notice where Ruined King is inspired by JRPG combat systems, although it also brings in its own unique ideas too. Ruined King, more than any other turn-based game I’ve played prior, puts an importance on the speed of combat and the positioning of characters within the combat timeline. It’s not just energy pools you have to contend with here, certain abilities will push you deeper into the combat timeline that means your hit won’t land until others have had their go first. Being able to keep on top of that timeline will help you greatly and the game even brings in the idea of different lanes operating at different speeds to give you more options and flexibility to manipulate that timeline. Move into the speed lane and your attack will land faster at the cost of some damage.

Where Ruined King gets super interesting is when it introduces hazards or buffs located on the combat timeline. At the end of a round, every character found within a displayed zone will be impacted by whatever buff or hazard is present. Choosing which lane you play in and what moves you use plays a big role in the strategy of the game as you move yourself into or outside of that zone. Moreover, certain abilities can be used to move your allies or foes tactically. This kind of interaction is not just fun, but it adds a new dynamic to a genre that can be sometimes quite stagnant. Ruined King isn’t the kind of turn-based RPG where your characters have like 1 or 2 moves that are better than the rest. Combat flows dynamically with heaps of valuable options that make for a balanced and strategic experience.

The strategy of Ruined King goes beyond the combat sequences too. Items gathered in the overworld can be equipped and upgraded and abilities can be embued with more powerful traits. It means you’ll have to think tactically both in and outside of combat. The depth of strategy in Ruined King is pretty impressive as you look to enhance your own playstyle or find synergies in your builds to help you overcome that next big enemy. Moments of the game can get challenging too, so ignoring all of these additional elements isn’t really an option. Much like a game of League of Legends, you’re tested and pushed to think more tactically as you spend more time with the game and learn more about the mechanics and synergies. It’s effective and helps push the player to earn their progression in the game, making seeing those next big setpieces and character moments all the more powerful.

Where Ruined King: A League of Legends Story falters most is in some of its interactions with the overworld. Whilst there are multiple different control options when moving around the overworld, I never found any of them particularly effortless. Sometimes simple things like walking through a doorway or positioning yourself close enough to loot a barrel became bizarrely tedious. Interacting on the small scale could be a bit of a nightmare. The game also allows you to send out a pulse-like wave that momentarily highlights interactable parts of the environment. This is an absolute necessity to help ensure you don’t miss anything and the ability runs on a small cooldown. It’s something you’ll likely find yourself activating over and over again. It seems like a small complaint, but this specific interaction would be far more enjoyable and useful if you could just hold down a button rather than send out a pulse. Any Diablo-style game has this offering, so why did Ruined King, a game that shares at least part of its DNA with Diablo games, decide to make this more painful than the standard that was already set?

Despite inconveniences, Ruined King still manages to present a compelling strategy experience with plenty on offer for fans of League of Legends. It’ll be very interesting to see future Riot Forge projects as the world of Runeterra is clearly one worth exploring more.

With deep strategy elements found both inside and outside of combat, Ruined King: A League of Legends Story makes for an undeniably engaging and challenging adventure. Fans of League of Legends get to see the world of Ruenterra from a new lens and will be hooked by the endearing character moments found within the game’s story. Ruined King may not find the wide appeal that other League properties have managed, and some of the interactions found outside of combat are admittedly cumbersome, but it’s hard to deny the excitement and depth of content found within the turn-based battles of Ruined King.