I have undoubtedly played more of Skyrim than any other game. Unfortunately, it isn’t really possible for me to give an accurate playtime because I have now played the game across so many platforms that it’s just unrealistic to keep track. PS3, PS4, PC, and sometimes even multiple versions of the game on the same platform. Now add PS5 to that collection and it begins to look like an obsession. This is a game that I have almost religiously bought the new version of nearly every single time one was released. It’s somehow hard to believe that it’s been ten years of Skyrim, my first copy being a gift a month or so after its original launch and I have barely stopped playing it since.

The most substantial upgrade to the game of all the re-releases so far was the 2016 Special Edition which gave things a well-needed facelift, with crisper textures, a more stable framerate, and the addition of select mods and a quick save option for consoles. The new Anniversary Edition comes with some of the premium Creation Club content pre-installed, including fishing and survival mode. There is also a collection of smaller free mods that are still available for download within the Special Edition for those who don’t feel like paying the cash for the Anniversary upgrade.

Largely, the game is still Skyrim, so there isn’t too much to talk about in that regard. It’s still the same characters, world, and plot. The only things that really set it apart are the pre-installed pieces of Creation Club content. The fishing is one of the main things used to advertise the new version of the game, but does it make it worth buying Skyrim, again?

Usually, I wouldn’t want to play a game on survival mode. I’m kind of an easy-going gamer, so the thought of it would be quite daunting, but I’ve played through Skyrim enough times that I was sure it wouldn’t prove too much of a challenge. It makes a decent chunk of changes to the original gameplay loop, adding the need to eat, sleep, and stay warm. Neglecting to do these things will have a major effect on your health and stamina, making it harder to play as you deal with the effects. I actually enjoyed these editions quite a lot. I love cooking in video games already and used to whipping up ten or so cabbage apple stews when I had the chance, just because I liked doing it. It was nice that cooking became a much more useful ability, as cooked meals provide a much larger recovery from hunger than just shotgunning nine wheels of cheese. Needing to sleep was interesting too. It forced me to rent a room at an Inn for the first time ever, lots of times actually. Any time I came across a town I would pay that 10 Septim fee for an Inn room, so much that it became a comfort to walk into one of those warm havens.

Another element to Survival Mode is the loss of fast travel. When I first realised this, I almost went to turn the mode off straight away, because the amount of walking I would be doing was so daunting. In the end though, I stuck with it and was actually very happy with my choice. There was so much of Skyrim that I stumbled across for the first time, having never made certain treks across the map. It also meant I spent a lot of time crouched behind horses to steal them when no one was looking. There was one occasion where I had to turn survival off because I had gotten stuck in a wall, and no wriggling or shouting was enough to free me. A quick fast travel got me out of the wall and then I put survival back on like it had never happened.

Skyrim’s bugs were something that a lot of players used to find endearing. There are countless videos uploaded of people’s funniest experiences with the game’s quirks, and while they are great for a laugh, it’s just hard to find them as cute when the game is now re-releasing for the umpteenth time. Things like this really should have been patched out when it was first re-released, but the fact that the game is still a buggy mess after all this time is a grave disappointment. 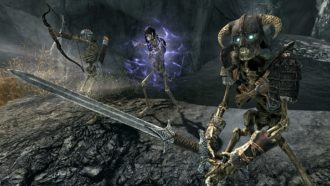 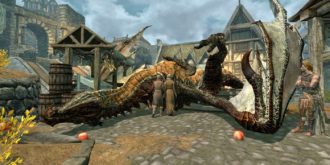 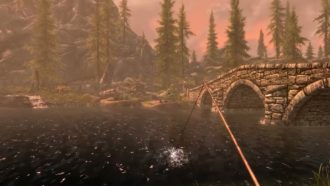 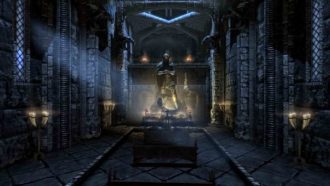 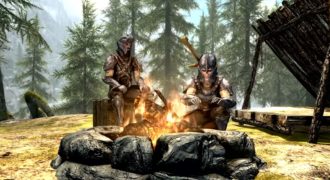 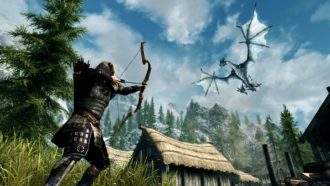 The other major edition to this new release is of course the aforementioned fishing. This mechanic feels disappointing, especially considering how much they were advertising it. When you equip a rod, it just ends up in your weapon slot and attempting to cast your rod just results in the Dragonborn swinging it the way they would swing an axe. That is unless you are in one of the few designated fishing areas in the game, then you stand and wait for something to bite and reel it in. It’s very basic as far as fishing goes, and the rod feels a little redundant when the Dragonborn is already able to catch live fish with their bare hands, but I digress. It seemed like it would be a neat little add-on for the game, but the requirement of standing in specific fishing locations makes it not very useful at all and kind of a pain to even use, especially if you are playing on Survival Mode without fast travel available. Being able to fish in any body of water could have been a big change to the game, but unfortunately, that isn’t the case here. The other free Creation Club editions are so un-noteworthy that if I have encountered any of them so far, I have barely even noticed. There was one new property that the player can purchase that I found while scaling a mountain, but apart from that there is nothing of any sort of interest.

Here is where I get mean. I love Skyrim, dearly and truly, but I can’t in good faith recommend this version of the game when the 2016 Special Edition is still available on console with most of the Creation Club add-ons available for free. Survival Mode was the only one that added anything to the experience and it wasn’t even something baked into the game. As much fun as I had with it, all I could think was that it isn’t any sort of real update. It is little more than an endorsed mod, and there are so many more Survival Mods available for PC Skyrim players that do so much more and are so much better implemented. The full version of The Forgotten City is a testament to the amazing things that modders can create when given full freedom, with that mod having enough meat on its bones to become a fully-fledged game all on its own. The Creation Club is designed to work within specific restrictions that regular mods available for download online are not, meaning that they are always going to feel tacked on and not well integrated into the game.

It’s disappointing that for this big 10th-anniversary release, they didn’t take the time to make any actual new content, it is just Skyrim again. As good as Skyrim is, it’s hard not to feel like Todd is grabbing the poor old game by its limp arms and making it dance for a crowd who just doesn’t care anymore. It was the most amazing game at the time, it influenced so much of both the action RPG and fantasy genres in video games, and it upsets me that Bethesda isn’t letting it just rest.

What was once the pinnacle of its genre has become a bit of a joke as it releases again and again and again. The Elder Scrolls V: Skyrim Anniversary Edition adds very little that can’t be found in the 2016 Special Edition or is already free with Creation Club content. There is enjoyment to be had out of playing the game in the new survival mode and I still adore the base game. However, Skyrim just isn’t as strong when held up to modern standards, and it is the fault of Bethesda that this tired horse is now running a race with so many others that are leagues faster.