Surprising few, Bethesda has announced a new port of The Elder Scrolls V: Skyrim for modern consoles and PC. This new release, timed to coincide with the 10 year anniversary of the initial launch in 2011, will contain improved visuals, all previously-released DLC, as well as more than 500 pieces of Creation Club content. I guess Todd Howard wasn’t kidding when he said that Bethesda will keep re-releasing Skyrim as long as people keep buying it.

If you already own Skyrim: Special Edition, a lot of the features in the new release will be familiar. The Dawnguard, Dragonborn and Hearthfire expansions were a lot of fun, but have been readily available for many years. Console players in particular may still be interested in the Creation Club content (read: officially supported mods) that have been integrated into the experience. This means “new quests, dungeons, bosses, weapons, spells, and more”. New activities will also include fishing, which has apparently been a goal of the developers to officially add in for a while. “It’s something I’ve always wanted to do in Skyrim,” stated managing director Ashley Cheng. “You don’t have to dive into the water and click blindly anymore. You can now grab a fishing pole, do some fishing quests. It’s a great addition to the game, it’ll be free to everyone, and it really adds to the immersion of the world.” 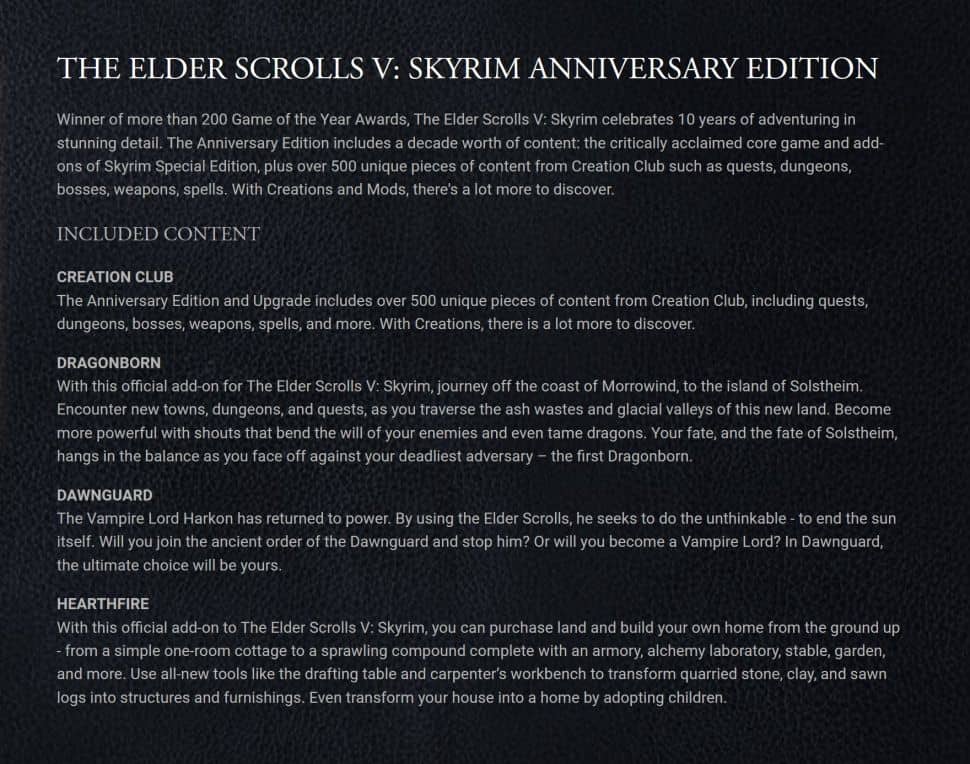 Fortunately, current owners of Skyrim: Special Edition won’t need to buy the full game all over again. According to Bethesda, existing owners and Game Pass subscribers will “receive the option to purchase an Anniversary Edition upgrade”, not unlike Ghost of Tsushima: Director’s Cut. Furthermore, fishing, Survival Mode and some new quests will be patched into Skyrim: Special Edition for free on existing platforms. Interestingly, the Anniversary Edition is still releasing on PS5 despite Microsoft’s purchase of Bethesda; it seems that Bethesda games already released on Sony consoles will continue to be supported. Future games, such as Starfield, are set to be Microsoft exclusives.