Microsoft has acquired ZeniMax Media, the parent company of Bethesda Softworks, in an acquisition worth $7.5 billion. This purchase includes the many acclaimed franchises published by Bethesda, including Fallout, The Elder Scrolls, Dishonored and many more. The acquisition will include all of the studios owned by ZeniMax, such as Bethesda Softworks, Bethesda Game Studios, Id Software, ZeniMax Online Studios, Arkane, MachineGames, Tango Gameworks, Alpha Dog, and Roundhouse Studios.

“Gaming is the most expansive category in the entertainment industry, as people everywhere turn to gaming to connect, socialize and play with their friends,” said Satya Nadella, CEO of Microsoft. “Quality differentiated content is the engine behind the growth and value of Xbox Game Pass—from Minecraft to Flight Simulator. As a proven game developer and publisher, Bethesda has seen success across every category of games, and together, we will further our ambition to empower the more than three billion gamers worldwide.” Microsoft has advised that they plan on Bethesda’s titles becoming available on Xbox Game Pass the same day that they launch on Xbox or PC, including the upcoming Starfield. 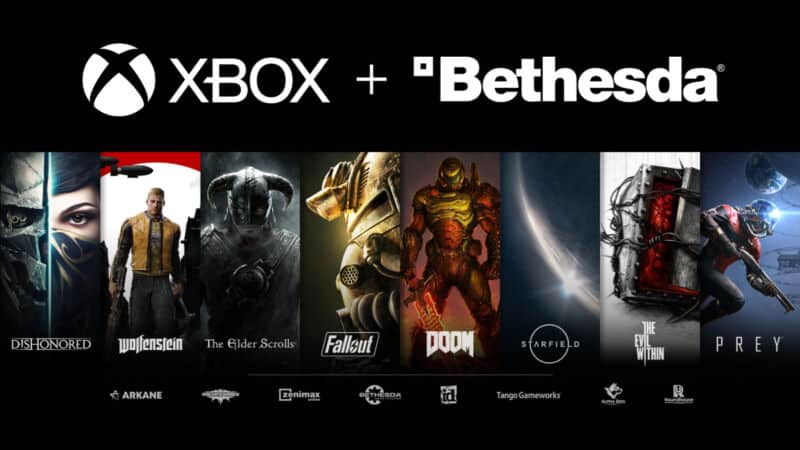 Regarding exclusives, Microsoft will honour any in-development games that are heading to the PS4, PS5 or Nintendo Switch. This includes Arkane’s upcoming PS5 exclusive, Deathloop, set to release next year. Future titles may also be released on non-Microsoft platforms on a “case-by-case basis”, according to Xbox chief Phil Spencer. Discussions regarding the purchase deal commenced earlier this year, leveraging the multi-decade relationship between Microsoft and Bethesda since Bethesda’s first-ever console release with The Elder Scrolls III: Morrowind on the original Xbox.

“This is a thrilling day for this company, our employees, and our fans. We have enjoyed a close partnership with Microsoft for decades, and this deal is a natural progression of those years working together,” said Robert A. Altman, CEO of ZeniMax. “The big winners today are our fans. We are continuing to develop our slate of AAA games, but now with Microsoft’s scale and entire Game Stack, our games can only get better.”

While console manufacturers buying studios is by no means unheard of, this is still one of the most industry-changing purchases ever. At $7.5 billion, Microsoft is spending three times as much as the $2.5 billion they spent purchasing Minecraft developer Mojang. Bethesda Softworks alone owns The Elder Scrolls and Fallout, two of the most critically and financially successful franchises around. Tangentially, now that Microsoft owns both Obsidian and Fallout, maybe they can get a Fallout: New Vegas 2 in development.

It may take a while for the effects of this purchase to feel known, as most games currently in development will continue to be multi-platform. Microsoft now has quite an advantage in the exclusives race, if it can count on many of ZeniMax’s franchise being available only on Xbox and Windows.