For over twenty long years now, Serious Sam is an FPS franchise that has been trucking along. Inspired and in a very close vein to boomer shooters of today’s past, it wouldn’t be far fetched to liken the series to Duke Nukem. A grizzled male protagonist with a gruff voice spouting corny jokes that feel as old as himself. Sending ammunition and explosives through armies of aliens… It’s something we all know too well. Serious Sam: Siberian Mayhem, the latest adventure in the series, is just this. A shooter tale as old as time itself. With it comes an average affair, leaving me begging for the series to throw in the towel.

This new fight takes place on the doorstep of a snowy biome within Russia. Sam Stone washes upon the ice-caked shores, blasting away at alien foes like he’s done many, many times before. There’s a reason for this venture: he’s in pursuit of General Brand, his AWOL and corrupted leader that is in possession of a powerful relic known as The Holy Grail. This artefact can potentially turn the tide of the war between aliens and humans, and so Sam must travel across the arctic circle, in the hunt to take it back. Not particularly following that? Think it doesn’t make all that much sense or matter? Good. You’re not alone.

Credit where credit is due: despite being a big departure from the typical type of environments and levels you’ll find in a Serious Sam game, it still feels at home for the series. Throughout Siberian Mayhem’s five levels, you’ll be blasting, running and gunning your way through research facilities, villages, open fields and a rocky frozen-over beachfront. Here, Sam will be toting his usual jokes and raspy one-liners, with the hit to miss ratio skewing more to miss. These lines are inoffensive compared to those of Duke Nukem’s past but still resulted in plenty of eye rolls. The alien threat is as familiar as ever, with new over-the-top zaniness such as squid operated choppers, that feel in place in this weird Russian dystopia. This just goes to show that Timelock Studio, a new in-house team within developer Croteam that is made entirely up of devoted ex-modders and fans, knows their stuff when it comes to the series. Even when it’s something new.

These levels also vary in their set pieces and look and run better than those in their predecessor, Serious Sam 4. Later storms through facilities and villages are broken up with riding of ATVs, leaving an open area of places to explore, not too dissimilar from the slower explorative moments you’ll find in Half-Life 2: Episode 2, riding around in the buggy. Combine this with a segment that has you piloting a mech and it’s clear the intent is to have players thrilled, on the edge of their seat as they meticulously strafe their way around foes, popping shots off left and right. In reality, despite the mixing up of environments level to level, enemies all flood the same way, in a progressive frontal line. Instances blur together, no matter the weaponry you’re using or tactics you’re taking. It’s all just going through the motions. 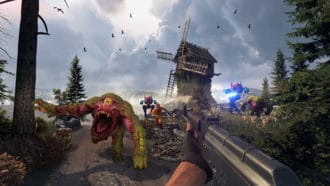 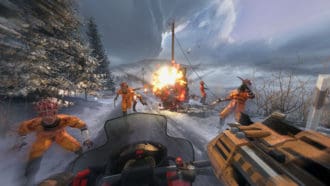 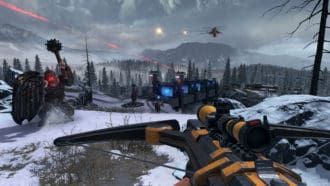 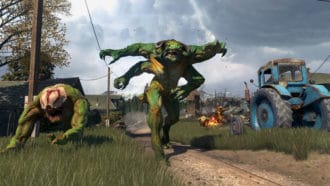 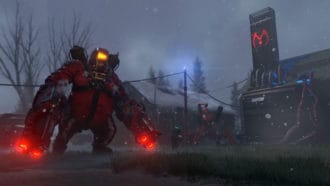 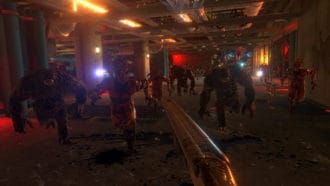 Shoot until they all drop

There’s a reason Serious Sam has stuck around so long. It’s thanks to the fluid movement, and that’s no exception here. If you’re at all an enthusiast of the fast-paced combat chess shooter gameplay, you’ll feel right at home almost instantly. Sam also seemingly sprints significantly quicker than any protagonist of any other game in the genre. The course of action here is to work with this, always moving. Before long I was maintaining a good flow and balance between sprinting, strafing and pushing an aggressive front, dodging every bullet and explosive that came my way. Sam’s agility helps here in familiarising yourself with this flow and I often found myself bunny hopping around like I was playing an early Source engine game.

What I also appreciated was the ability to change between first and third-person perspectives on the fly with a key binding. This ever so delicately helped with being aware of my positioning and surroundings, something crucial in a game this fast-paced. Whilst it’s evident Croteam and Firelock Studio were going for a traditional feel for Serious Sam: Siberian Mayhem, I would’ve loved a sliding button in here to add to the versatility. So many times I instinctively went to do so; this feels almost essential at this point.

“…It’s all just going through the motions.”

All the weaponry you’d expect from a game in the series, be it a literal cannon or shotgun that packs a punch returns too. While every weapon feels near equally overpowered, playing into the action hero power fantasy, it’s refreshing enough to mix it up with different types to deal with varying distances between foes. An AK, a crossbow that can fire energy bolts across long distances and a burning raygun all make up new additions to your arsenal, something I don’t doubt will be welcomed by fans.

Serious Sam: Siberian Mayhem also offers enticing gadgets to help double the damage. Even though the majority of the game’s 6-hour runtime felt monotonous to sweep through, the ability to slow down time for damage control during a busy screen became mandatory. Joining the established list of gadgets is a portable hoverboard scooter and the ability to call in an airstrike of devastating rockets in a given space. The latter I often used not in a strategic matter but just a way to clear the last wave of foes in an environment when I was already long past ready to move on. Perhaps not the intended use but effective nevertheless.

Any and all of these tools are often destined to improve your gunplay experience and you’re going to make good use of them. Frankly, this is also because the melee options on offer in-game are a little atrocious. Sam can perform a takedown on enemies that come close quarters, but these are met with animations that are incomplete and not all that varied. It was quite unsightly to see and experience to see an enemy crumple under Sam’s hands in a weird fashion. I’m not expecting Doom Eternal level depth in executions but at least something a little cleaner.

Skills help mitigate some of this damage. Progress far enough in the skill tree and you can learn feats such as being able to dispatch larger enemies with a melee strike. Many of these skill points you’ll find in a level come from the aforementioned exploring that is rich within Siberian Mayhem. Plenty of secrets are found in nooks and crannies while puzzles are found off the beaten path, each netting you more of these points. I just wish they equated to something more. Several relate to gaining either health or more goodies from meleeing enemies, but with its jank, it’s something I often avoided altogether. Even the diamonds in the rough such as the ability to ride a charging alien bull became negligible. Before long, the skills become background noise, only being reminded they exist when something cool mid-combat happens as a result of them every fifteen minutes or so.

Ammunition-fueled ATV trips, Mech piloting sequences and taking down squid-operated choppers levels of insane action can’t save Serious Sam: Siberian Mayhem. No matter how varied the environments or silky smooth the gunplay and weapons may be this time around, it’s clear the franchise is in need of more of a shakeup. Blowing through waves and waves of extraterrestrial threats doesn’t take long to blur together and once more feels like going through the motions. It’s frustrating too; creating a game with the help of loyal fan modders is arguably as true as the franchise can get. Still, it struggles to impress. Maybe it’s high time the Serious Sam series take notes from its most recent setting: traipsing away on ice for a little while.