Elden Ring Review – A Song of Slice and Ire

From the devious mind of Hidetaka Myazaki comes the next Souls-like epic. The hugely anticipated Elden Ring has landed and it brings with it a lot of familiar concepts eager FromSoftware fans will know and love—an obtuse narrative, a dark gothic aesthetic, a lack of hand-holding, and towering foes ready to slice you in half upon first introductions. With that familiarity though comes a whole new open format that changes the formula considerably and creates something with more scope, more choice, and a fresh feeling of excitement and longevity.

Those familiar with the Dark Souls/Demon’s Souls series and subsequent FromSoftware titles will already know what to expect from Elden Ring. This is a third-person action RPG with an emphasis on sword-to-sword combat and tough-as-nails boss fights that lead to many bitter defeats before a feeling of overwhelming triumph. All of that and more remain in Elden Ring, with known Souls staples creating the framework for the entire experience. Miyazaki and his team are in their element here, with a brooding narrative of a shattered world supported by striking design choices and an RPG system that puts freedom into the player’s hands.

In the game, you play as a Tarnished. Your journey takes you to a place known as the Lands Between where the Elden Ring was shattered, spreading its shards across the realm. A series of intimidating foes, each possessing a shard, must be slain so that the Elden Ring can be restored, allowing you to become the Elden Lord.

“Notable author George R.R. Martin lends his lore-building chops to the project, but don’t expect storytelling in the style of A Song of Ice and Fire.”

Notable author George R.R. Martin lends his lore-building chops to the project, but don’t expect storytelling in the style of A Song of Ice and Fire. Much like the Souls series before it, Elden Ring explores its narrative through slow and steady worldbuilding rather than cutscenes or exposition dumps. It’s a hands-off approach that’s a little unusual in Triple-A games but something fans have come to appreciate from these titles. Rest assured there are plenty of characters to meet and tidbits of lore to uncover, making you feel as though you’re just one small part of a much larger universe.

Questing is handled in a similarly hands-off approach. NPCs won’t be standing around with a golden “!” above their head and quests can’t be tracked via a journal, nor will they create a quest marker on the map. Instead, players will stumble across characters of note whose stories, needs, and motivations will be uncovered through dialogue. You as the player can then choose to help those characters, or, more likely, get lost and distracted by everything else going on in the world, only progressing that character’s arc by happenstance later down the line. It’s a wildly unobtrusive system but one that works undeniably. Elden Ring isn’t a game to be “completed” via a checklist. It’s a world to be explored at a natural pace, one that keeps you immersed within its environment even if that means some interactions go unseen by the player. It gives the game a distinctive feel, unlike the work of virtually any other big studio. 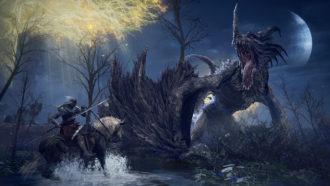 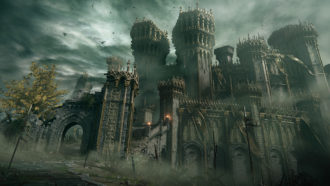 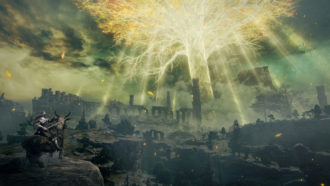 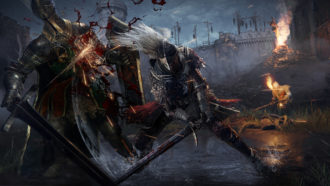 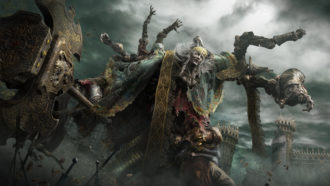 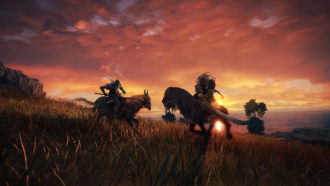 Where Elden Ring excels and solidifies itself as a monumental release is in its offers of freedom and player choice. The game may have some distinct similarities to Dark Souls, even sharing animations, assets, sound effects and more, but where it differentiates itself the most is in its open-world approach. Gone is the interconnected world design full of branching linear paths and instead we have open regions littered with catacombs, castles, and dilapidated ruins. An open-world Dark Souls is a pretty interesting prospect, but what does it mean for the game?

Admittedly, a few things are lost by taking the genre into an open-world format, including those moments of amazement when you head up an elevator and find yourself back in a familiar area after a long detour. Elden Ring doesn’t have those moments of staggering interconnectivity, but what is gained by the open world is equally as impressive. Choice plays such a big role here. We know Souls games can be brutally hard, so giving players the options to stealth around, ride via horseback, and literally circumvent challenging fights by just avoiding them becomes super valuable. It also has this secondary effect of making the game more accessible than your average Souls game. Don’t get me wrong, battles are still intense and will put you to the test. But the ability to decide to explore in a different direction when you run into a tricky spot goes a long way to preventing frustration. It’s not a series of hurdles lined up in a row, it’s a playground of varying obstacles that can be tackled and explored at your own pace—many of which can be ignored altogether.

That freedom of choice philosophy finds its way into the game’s RPG elements and combat too. Right from the jump, the player will have access to a detailed character creation tool that includes the selection of your character class. Each class comes with different weaponry, stats, and equipment. Out in the world, you’ll continue to tailor your character through levelling up and finding new armour, talismans, and weapons. The range of gear on offer is really staggering, meaning a second playthrough can feel completely different to the first. This is especially true when you add magic, ranged weapons, summons, weapon art, throwables, and so much more to the equation. Nothing is set in stone though, with full stat respeccing available about halfway through the game and the ability to alter your physical appearance available freely even earlier.

Elden Ring can be somewhat overwhelming in its varying gear, stats, and combat and exploration choices. Nobody is there to guide you through the process and it can be admittedly a little daunting for those less familiar with FromSoftware’s past work. Thankfully pretty detailed tutorialisation is available every time you open up a new menu screen. It certainly helps, but won’t fully alleviate that overwhelming feeling, especially for players who are more used to a guided experience. 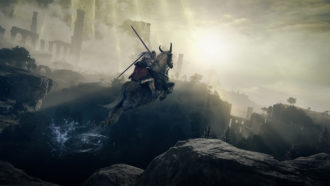 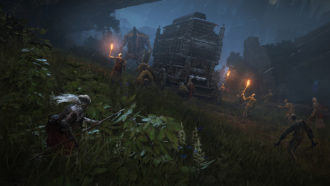 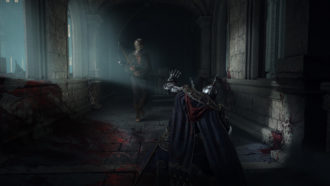 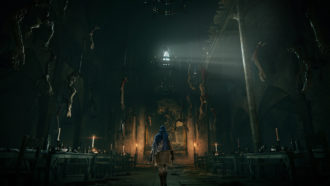 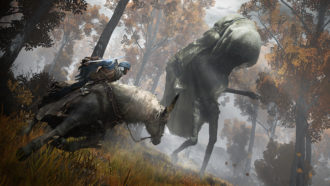 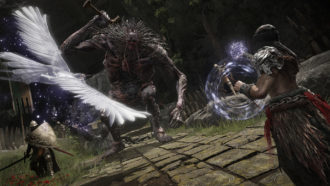 Combat in Elden Ring feels good, unsurprisingly. Dodge rolls and well-timed blocks are mandatory as you learn the attack patterns of intimidating foes who can cleave you in twain with just a couple of hits. It’s a very reaction-based system and not one for the feint of heart. Whilst Elden Ring is probably the most accessible of the FromSoftware action RPGs, it’s still a brutal and mechanic-heavy onslaught that won’t be suitable for all gamers. Attacks feel weighted and powerful with a juicy and forceful sound effect accompanying every impact. 40 hours in and I still find so much joy from the feel of the combat, even if those animations and sound effects are ripped straight from the developer’s past work.

There was definitely an opportunity to make Elden Ring feel like more of a next-gen game with updated production values and graphics that would align it with 2020’s Demon’s Souls. That opportunity may not have been fully embraced, but it’s largely unimportant when you look at the leaps and bounds the game has made in other areas. It’s hard to get upset about what could have been when what exists is still so spectacular.

“It’s a great feeling to come across a new enemy or situation, knowing you have the tool somewhere within your arsenal to overcome that particular obstacle.”

Ranged combat and magic don’t feel quite as good as their melee counterpart, with less involved systems leading to less interesting fights. This has been true of all Souls games. Yet having them there to support the close-quarters combat is a useful tool for both PvE and PvP content. It also just provides even more options to tackle the vast array of encounters on offer within the Lands Between. It’s a great feeling to come across a new enemy or situation, knowing you have the tool somewhere within your arsenal to overcome that particular obstacle.

The mere breadth of fun and viable combat builds that I found during my time with the game gets me excited for all the things I didn’t see—or didn’t even realise was possible. Elden Ring is the kind of game where you’re going to miss things on your first play. There’s just so much to see and uncover. It really is the kind of world you can get lost in. From the Rot-stricken, barren landscapes in the east to the perilous mountain ranges in the north. The Lands Between is a wondrous place ripe for exploration. There’s a little bit of repetition to be found in some of the catacombs and dungeons scattered about the environment. And some foes who made for exciting encounters originally are a little less exciting on the second or third meeting. But these complaints are largely inconsequential when compared to the absolute plethora of bizarre, intimidating, and glorious experiences that litter the world around you.

Having areas of the game that are more linear in nature such as the Castle, Academy, or Capital is really smart too. It means those more traditional Dark Souls world designs aren’t completely lost, they just happen to be found within a much larger open world. It also changes up the pace of the game as you ride through vast environments and jump off your horse to tackle tighter corridors and unavoidable fights. These were actually some of my favourite areas of the game as I got a chance to use those Dark Souls skills and scour every nook and cranny, playing methodically so as to find everything there is to be found and take down every foe that gets in my way.

From beginning to end, Elden Ring creates an expansive and impressive affair. And that only gets stronger once more players join the world and bolster the game’s online offerings such as invasions, cooperative play, messages and more. Elden Ring feels as though it’s made for the fans, unflinching in its objective of creating a gargantuan experience players can sink weeks if not months into. Rise ye Tarnished, a playground of unrelenting death awaits.

The hype behind Elden Ring was always going to be a challenge to match, yet the game succeeds in almost every way. This detailed and exciting world is full of wondrous moments and brutal fights as the excellent Souls gameplay finds itself being utilised in a freshly open-world format. The variety of ways you can approach combat and the sheer volume of viable tools you can use to take down gruesome and frightening foes makes for an experience that never gets old. A game unwavering in its vision, Elden Ring stands out as a monumental 2022 release.