Falling from the sky, out of a rift in space and time, Pokémon Legends: Arceus almost shocks with how divergent it is from the series. For many, many decades, the mainline Pokémon games have been turn-based, monster-catching RPGs inflated with content and simplified mechanics. While it certainly isn’t the most visually appealing, the new foundations of Pokémon are remarkably refreshing and straight-up fun—but Game Freak still needs to nurture this latest chapter.

Fish out of water

Pokémon Legends: Arceus begins as a typical Isekai anime, teleporting a modern-day kid into the ancient Hisui region, also known as Sinnoh, long before the events of Pokémon Diamond and Pearl. An ambitious Professor Laventon finds the lost player and asks for your help to catch em’ all and uncover the secrets of the wild Pokémon, the mysterious rift in the sky, and the source of instability.

Unsurprisingly, the story isn’t the selling point. The pacing is excruciatingly slow to begin with and wraps up in an awkwardly tied bow. There are a lot of mysteries and underlying questions left unanswered, even after completing the Pokédex. The surprisingly mature themes of higher life, fear of the unknown, ethnocentrism, coming of age, and mortality are explored, but they’re admittedly presented in a considerably basic way. Luckily, it’s still a straightforward and enjoyable tale carried by the beloved world of Pokémon.

Pokémon aren’t domesticated in this era and roam the world as wild creatures. Even the Pokéball is a recent invention. You’ll notice small details to the lore, like fireworks popping out of a successful capture instead of the usual chime and light, or Nosepass always pointing north as their Pokédex entry says. Tiny particulars that show the care and passion Game Freak has for this series. Although, Pokémon choosing to get smaller instead of just being zapped into a Pokéball is a puzzling canonical choice.

Jubilife Village is the hometown where players rest and view Pokémon in a large pasture, shop for items, customise fancy outfits, and check-in quests and other NPCs. The village is an excellent introduction to the setting and its people with their traditional culture and architecture. Bonus points for Game Freak for including characters who present as androgynous, such as Melli and Adaman. 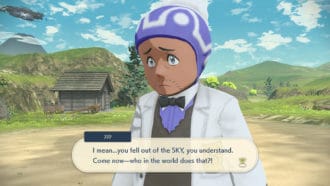 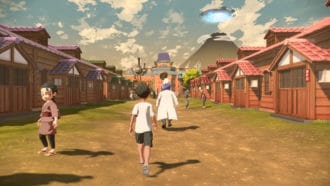 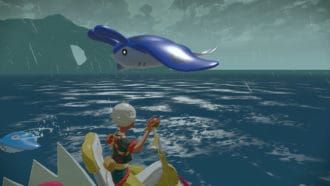 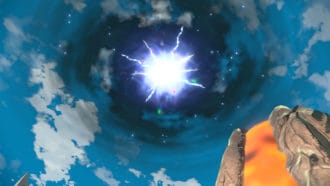 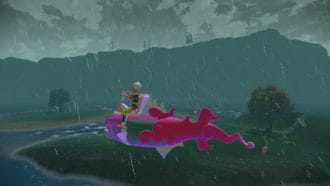 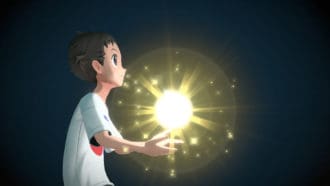 As a semi-open world game, areas are segmented, comparable to Monster Hunter Rise. Legends: Arceus tampers with the mainline formula, feeling like the next step for Pokémon. The most recent games use 3D models and environments but never fully realise them in the same way Pokémon Legends: Arceus does.

Visiting the Obsidian Fieldlands is like playing Pokémon for the first time again. Roaming an open space, Starly and Bidoof just enjoying life, catching a Psyduck splashing around in a pond, or riding on the back of a Wyrdeer—it’s an unbelievable feeling. There is so much whimsy in exploring the beachside Cobalt Coastlands and mountainous Coronet Highlands; merely seeing your favourite Pokémon is magical. It would be a travesty to return to the random encounter, unseen enemy style in future iterations.

“There is so much whimsy in exploring… merely seeing your favourite Pokémon is magical.”

A space-time distortion may appear randomly in the world, opening a purple dome with challenging battles and valuable rewards. Unique items and Pokémon can spawn in these time-limited events, meaning you’ll need to drop everything and jump on a mount to get there quickly. Similarly, Outbreaks of specific Pokémon will occur, indicating a higher chance to catch shiny variants. Sure, these world events might end up in a three-on-one battle against a group of relentless Graveler, but it adds excitement to the adventure.

Pikachu are cute and cuddly but not all Pokémon are friendly. Alpha and Frenzied Nobles are challenging battles that will put an end to your frolic through Hisui. With boosted stats and higher levels, they put teams of Pokémon to the test and require strategy. The red-eyed Alphas can be captured with the right tactics, like a status ailment or a portion of food they like to make them less resistant.

The Frenzied Noble Pokémon aren’t catchable, but they serve as major story milestones. Instead of a typical battle, the player throws balms at the Noble to calm them down and eventually engage them in combat. Dodging attacks like a boss fight from a janky third-person adventure game, these moments can be pretty underwhelming. Endlessly tossing balms to weaken a mighty creature is almost comical and not as exciting as a proper battle.

Quest to finish the Pokédex

Each area has several fast-travel camps where players can sort through their Pokémon team, shop or craft items, and access universal storage. A tent for resting revives all Pokémon and can change the time of day to hunt for the nocturnal Ghastly or Dusclops, for example. It makes sense in this era without established Pokémon Centres and PokéMarts and is a great quality of life upgrade. It’s so convenient to manage all your Pokémon and items in one spot.

Pokémon Legends: Arceus also introduces conventional RPG side quests to the series. Certain townsfolk in Jubilife Village will ask to see specific Pokémon or gather ingredients. These quests are nice distractions that encourage exploration of the large areas of Hisui, learning more about what the world was like before Sinnoh and how it came to be. The characters are also a laugh. A shopkeeper wants a completed Pokédex for Starly and is immediately terrified when you show up with one. Others can be trivial, like capturing a Buizel taller than 2.8m which ultimately boils down to trial and error. Side quests are hit and miss yet a welcome addition.

Individual quest tracking is frustrating. As a so-called hero, you’ll naturally pick up too many quests to handle and can view them via the map menu, yet having only one active at a time is just regressive. The menus aren’t always easy to navigate either, often cumbersome with the limited number of items or stats you can view on the modest screen. You’ll constantly be flicking through tabs, opening the wrong submenu, or scrolling through large lists of Pokémon to find what you’re looking for.

All that being said, researching and completing the Pokédex is fulfilling. The open-world nature lends itself more avenues to survey and document these mysterious creatures for Professor Laventon. As a requirement to progressing ranks and unlocking new areas, you’ll need to catch and battle Pokémon multiple times to finish entries. Objectives are specific to each Pokémon, such as seeing a Cyndaquil use Fire Wheel five times or capturing six Teddiursa without being spotted. While it may sound tedious and indeed can be when grinding out the levels, it’s a playful twist to the usual Pokédex experience. 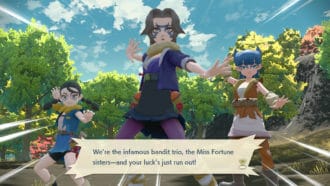 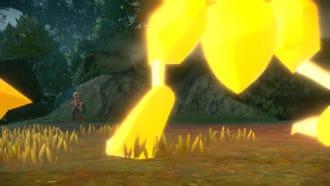 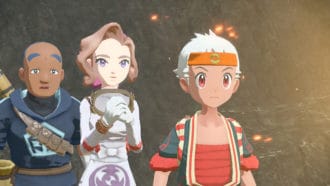 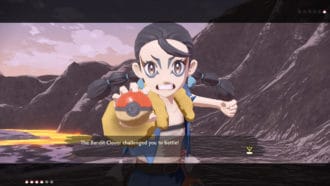 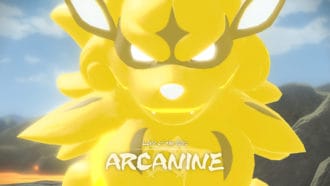 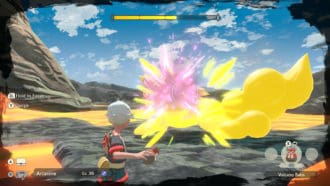 No more avoiding tall grass, battles are now fully integrated into the world of Pokémon Legends: Arceus. Instead, you’ll want to crouch in tall grass to sneak up on Pokémon, catch them by surprise, and get an advantage on the higher level foes. While stealth isn’t adequately explained or very deep, it does make capturing and battling more absorbing.

Turn orders and speed are essential. In battle, a Pokémon with a mastered move can select a faster Agile or damaging Strong style attack and influence who makes the next move. If timed right, a Pokémon can attack multiple times in a row with the Agile style, potentially capturing or using an item on that second move for a strategic opportunity. At the same time, Strong style will be powerful but may also give the opponent a chance to hit twice in a row. While output will always win in most cases (hitting twice generally doing more damage than one strong attack), the tactics help freshen up battles.

“…an experience that is more convenient to play, regardless of its shortcomings.”

With the positive changes come questionable removals. Pokémon no longer have held items or abilities, radically dumbing down how particular Pokémon behave and can be used during battle. There is also the simplification of Individual Values (IVs) and Effort Values (EVs) from previous games, now represented just as EVs. Improved by using Grit items, they’ll boost stats of Pokémon for trainers who want to perfect their team. In the context of the historical setting, it makes sense Pokémon aren’t being exploited for their stats and abilities. Still, it makes the combat mechanics less rich and may bother elite players.

In the end, Pokémon Legends: Arceus is a mainline game made for everyone to play. The streamlined combat may be dulling, but it complements the changes from the most recent entries. We can now evolve, change nicknames, respawn immediately where you die, and swap out moves from the inventory menu for an experience that is more convenient to play, regardless of its shortcomings.

Multiplayer battles are not included in the game, either. This could be because the changes to the battling systems may be too unstable for fair fights. It may also be context, as competitive and recreational battles aren’t a thing in this world. However, players can still trade Pokémon online and find each other’s lost items if they fall in battle or exploration.

Uglier than a Garbodor

Alright, let’s address the Phanpy in the room. Pokémon Legends: Arceus does not look good. At all. Besides Ken Sugimori’s always iconic and beautifully created Pokémon, everything else in this game seems plain and disappointing. From the early trailers the community has had concerns about the visual appeal of this entry and for a good reason.

Objects in the world have terrible anti-aliasing, with jagged or choppy edges to many people and Pokémon. This generally happens when a display device doesn’t have a high resolution to represent a smooth line, with the Nintendo Switch running at a max of 1080p. Elements of the world and detail in the environment carelessly pop in metres away from your character. The limiting view distance means Pokémon far enough will animate at a very distracting low framerate, looking like cardboard cut-outs.

Sure, the Nintendo Switch is older and less powerful than a PS5 or Xbox Series X. However, there are many examples of astounding environments on the handheld, including the launch title The Legend of Zelda: Breath of the Wild or Mario Odyssey. The Obsidian Fieldlands is almost like looking at a colour palette if you have a broad enough view. Game Freak must have had serious performance struggles and instead decided to drastically downgrade the visual quality for optimisation.

Music and sound are okay at best. The orchestral battle tracks and area themes are well composed but don’t add much to the life or context of the game. A few exceptions redeem the score, like the pleasantly calming Jubilife Village theme, which incorporates traditional Japanese strings and flutes or the jazzy Midnight theme. Mostly, they are forgettable and sound very compressed.

Rather than including new sound effects, Pokémon cries use the digitalised tunes we know and love. Even if the world is no longer top-down 16-bit graphics, those cries are embedded into our memories for life. It’s also fascinating to hear Thunder Wave or the fluttering of a Scyther’s wings in different environments, as the developers have gone the extra mile to include reverb and acoustics specific to the location.

Pokémon Legends: Arceus is the future for Pokémon games. The graphics are disappointing and the combat is very simple, yet it’s undeniably fun to play. Exploring areas with roaming Pokémon has been a distant dream for a long time and it’s finally here. With improvements and tweaks, this is how the mainline series should stay.