At one with nature

Monster Hunter as a franchise has never let much of a narrative bog down the hunting, and Monster Hunter Rise continues in that direction. You play as the newest hunter in Kamura Village, a small town that is being impacted by the Rampage, an event where monsters mysteriously become far more aggressive and dangerous. On the balance of things, it is less cutscene-heavy than Monster Hunter: World was, although it provides enough context to motivate your next hunt.

Where Monster Hunter Rise shines is its general presentation. Capcom has used a modified version of the RE Engine that they have used for Devil May Cry V and the Resident Evil remakes. Even on the Switch, the environments and monsters all look fantastic. It does not quite compare to World, which of course ran on more powerful hardware. However, small touches like plants swaying as you pass through them, or the steam rising from the lava in the Lava Caverns really makes each area feel alive. As in World, areas are no longer segmented by loading screens, although they are noticeably smaller than World’s expansive battlefields.

The game’s character designs and animations are also very detailed and full of charm. The trademark over-the-top food preparation scenes are more over-the-top than ever. Your hunter is accompanied by the Felyne Palico, as well as a Canyne Palamute and the owl-like Cohoot, all of whom can be adorably interacted with.

Naturally, the monsters take center stage, with many new monsters in this entry taking their design inspiration from the Yokai of Japanese folklore. My personal favourite of the new cast is the Bishaten, a breakdancing bird/monkey hybrid that has a prehensile tail that it uses to throw fruit at you. Each monster is introduced with a cool cutscene and ominously-delivered poem, giving the monsters more personality than ever before.

I don’t know what to think about the addition of voice acted lines for the player character. On one hand, they provide some useful audio cues for when to expect a powerful enemy attack, or to indicate when your target is getting weak. On the other hand, the more utility-focused lines are peppered with groan-worthy quips like “I hope you have insurance” and “Mr. Monster, meet Mr. Weapon!”. Some players might find them endearingly cheesy, but they took me out of the experience somewhat. Fortunately, players who prefer their hunters mute can toggle that in the options, at least. 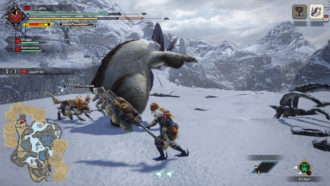 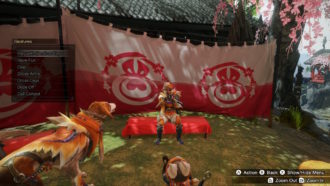 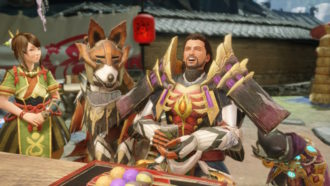 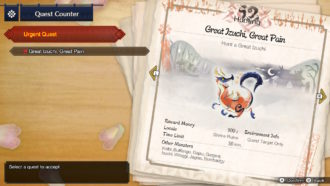 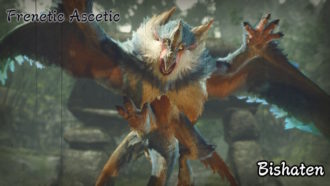 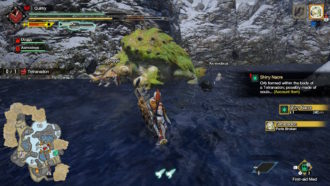 If you have played any of the previous Monster Hunter games, you will probably find the experience of playing Monster Hunter Rise rather familiar. You take quests from one of the quest-givers in town, where you will then travel to an area to hunt one or more large monsters under a time limit. Materials obtained from slain or captured monsters can then be used to craft weapons, armour and items to make you better prepared against the next challenge.

There are 14 varied weapons to choose from; I played around with a few of them, but I ended up defaulting to the Switch Axe, my weapon of choice from World. That said, I recommend trying out the Hunting Horn, which has been overhauled, making it much more fun to use. There is gyroscope aiming as well, which is particularly handy for ranged weapons. Unfortunately, the handy button prompts in the corner of the screen from Monster Hunter: World are no longer there, making it more difficult to come to grips with different weapon types, and making the game somewhat less accessible to newcomers in that regard.

Where the game differs from its predecessor is in mobility options. Firstly, you are accompanied by a Palamute, a friendly canine companion that you can ride on in the village or in combat. It makes getting across the map a breeze, and escaping a hopeless encounter more viable. As with your Palico companion, the Palamute also assist in combat by distracting enemies, which can help a lot when playing solo.

The other new addition are Wirebugs, the replacement of the Slinger from World. Wirebugs essentially let you zip across the battlefield and run up and along most walls with ease. It adds a new layer of verticality to combat encounters, as you can ascend walls and follow flying monsters that try to escape. Weapons also have special Wirebug-assisted attacks that can be customised, which feel similar to the Hunter Arts system from Monster Hunter: Generations.

The final new addition is Wyvern Riding. While mounting a weakened monster has been a mechanic since Monster Hunter 4, Monster Hunter Rise develops that mechanic substantially. Now, using Wirebugs, you can mount and then briefly control monsters during a fight. While riding on them, you can get them to attack other monsters. You can also launch into other monsters to stun them, allowing you to ride them as well. If you ever wanted to turn an Anjanath’s fire breath onto your opponents, Monster Hunter Rise finally gives you that option.

“I appreciated the extent to which busywork has been minimised; Monster Hunter Rise gets straight to the good stuff.”

The other changes are mostly minor streamlining of mechanics, that may prove controversial for series veterans. The element of locating a monster and tracking it down is now almost totally removed; all large monsters appear on your minimap to start with, and do not need to be tracked with Paintballs or Scoutflies. Foraging has also been simplified, with foraging locations like bonepiles and mineral deposits only needing to be interacted with once to obtain all of their contents.

Continuing the trend from World, there are practically no dull “gather x items” or “hunt x small monster” quests to start off with. I appreciated the extent to which busywork has been minimised; Monster Hunter Rise gets straight to the good stuff. 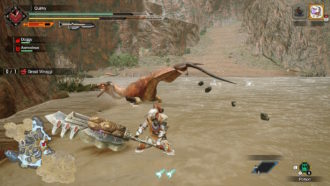 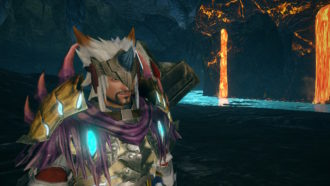 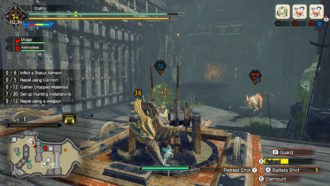 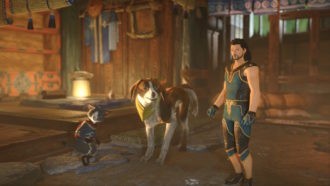 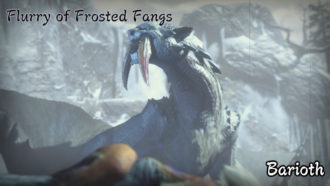 And now for something completely different

The final new addition of note is a new tower-defence gameplay mode called Rampage Quests. They are a refinement of the Siege Quests against colossal monsters in prior games, such as the fights against Jhen Mohran in 3 or Zorah Magdaros in World. Players must repel a succession of large monsters from breaking through and damaging the town gate. You can erect fortifications, such as ballistae, cannons and explosives, to ensure the monsters turn away or get cut down before getting through. As someone who is not normally particularly taken with the tower defence genre, I actually enjoyed Rampage Quests quite a lot. While they are rarely necessary to unlock the next quest tier, you can earn valuable Defender Tickets that allow you to “ramp up” your weapons with special stat modifiers and abilities.

The battles themselves provide a good amount of escalation, moving across different zones and expanding the types of defensive weapons you can create as the fight progresses. The minimap shows which monsters will focus on fighting you, versus trying to break through to their objective. Plus, the whole thing is improved immensely by the ability to wade into the fight yourself and go at the monsters with your weapon of choice if your defensive structures are incapacitated. The Rampage Quests provide the right kind of circuit breaker to mix things up between hunts.

There were high expectations with Monster Hunter Rise, following World’s success and returning to a more portable console. Fortunately, Rise has taken note of the franchise’s most successful elements, and refined them into the best Monster Hunter yet. By continuing the streamlining that Generations and World started, Rise has focused on making the actual hunting the most engaging it has ever been.

The lack of Monster Hunter: World’s tutorial button prompts may make it more inaccessible for some. However, the added speed of travelling around makes the hunting feel fresh and exciting, even after over two dozen hours. Once you have become immersed in Monster Hunter Rise’s loop of hunting, crafting and participating in Rampage Quests, it’s hard to put the controller down. Monster Hunter Rise is an easy recommend for Switch (and eventually PC) players who have even a passing interest in the franchise.