Shadow Warrior 3 is the latest instalment in Polish developer Flying Wild Hog’s reboot series of the 1990s FPS Shadow Warrior. After going in a Borderlands-esque looter-shooter direction with its predecessor in 2016, Shadow Warrior 3 jettisons open-ended levels, side-quests, and most of its RPG mechanics to distil everything down to the most streamlined shooter it can be, and in this case, it actually worked. By trimming anything slow or boring and stringing protagonist Lo Wang across a linear succession of first-person parkour platforming and arena shooting, Shadow Warrior 3 is the series’ best instalment yet, and an easy recommendation for fans of retro-style shooters.

It’s the post-apocalypse, and the giant dragon that showed up in the cliffhanger of Shadow Warrior 2 has pretty much destroyed everything. Wisecracking ex-ninja Lo Wang, now sporting a new haircut, jacket, and voice actor, is forced to team up with his former nemesis Orochi Zilla to formulate a plan to take it down. There are complications, mostly involving Wang’s descended god friend Hoji, however, the game is definitely not too invested in its plot.

Wang has good chemistry with Zilla, and Hoji as a jokey comedic counterpart to their (slightly) more straight-laced personalities works a charm, however, the humour probably won’t be for everyone. Despite the game’s rather brisk playtime, Wang’s combat quips do start to repeat themselves before long, and tend towards the lowbrow. Wang is a likeable enough protagonist, so the fact that many of his jokes didn’t land all that well didn’t bother me too much. 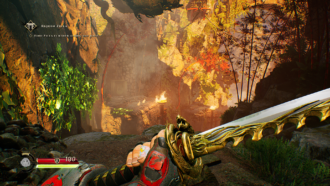 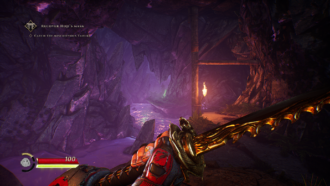 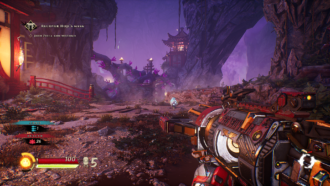 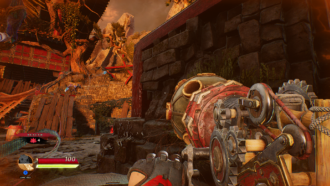 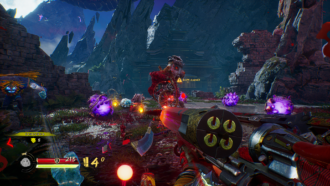 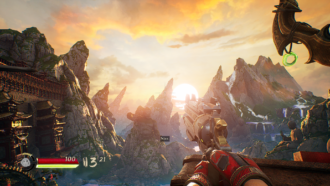 Shadow Warrior 3 is a great example of how a game series jettisoning gameplay mechanics can improve the overall experience. Shadow Warrior 2’s dalliance with an intricate loot and upgrade system slowed the game down and kept the player in menus for too long. As such, Shadow Warrior 3 strips things down to the basics, with fewer weapons with linear upgrade trees that don’t need to be swapped out every level or two. Considering it kept me in the action a lot more, I was glad that this entry focused more on what I was here for.

Having now committed to being a modern DOOM-style arena shooter, Shadow Warrior 3 still brings many of its own ideas to the table. The grappling hook that Lo Wang acquires early on is a good example, bringing a great deal of spectacle to the mid-fight platforming sections, and adding several cool ways of traversing the battlefield to get out of ambushes or chase after distant foes. Lo Wang can also wall-run, adding several more traversal options.

There is also a focus on environmental kills, with spike traps and pits placed across the levels for you to Chi Blast enemies into. This wasn’t as integral to the experience as I would have liked; not every level has environmental hazards, and you need to fully upgrade your Chi Blast power just to be able to push larger enemies into them. Still, there are few experiences more cathartic than manually triggering a big pitfall trap and watching all the non-flying enemies fall in.

“Where Shadow Warrior 3 excels is its sense of flow.”

Where Shadow Warrior 3 excels is its sense of flow. Melee kills always yield ammo drops, and gun kills result in health pickups. Larger enemies are always accompanied by easily-killed minor demons who can be taken out for extra resources. It’s a great design choice that ensures that the player is rewarded for playing aggressively.

The other innovation that Shadow Warrior 3 brings to the table is the addition of Gore Tools. Once you build up a finisher bar, you can pull off brutal finishing moves against your foes. While functionally similar to the Glory Kills in DOOM Eternal, it iterates on them in interesting ways. In addition to an elaborate death animation and a free kill, finishers in Shadow Warrior 3 also provide access to Gore Tools.

These Gore Tools are special short-term buffs that differ in utility depending on what kind of enemy you finished off. They can include temporary invincibility, a freeze grenade, a giant sword or a laser beam, among others. It’s a great way of providing more depth to the finishing move system by making you think about which enemy to use it on.

If there is a tiny bugbear, the finisher move animations are just a bit too long, and threaten to impede the all-important flow that Shadow Warrior 3 otherwise excels at. Besides, each enemy type only has one finisher animation each; seeing Lo Wang cut open the Jack-in-the-Box enemy to extract a minigun from its corpse is awesome the first time you do it, but loses its novelty factor by the 10th occasion.

Shadow Warrior 3 is an excellent FPS that fans of retro-style arena shooters are sure to have a blast with. Lo Wang’s quips might not land with everyone, and fans of the previous game’s RPG mechanics might resent the stripping down to basics with the gameplay, but Shadow Warrior 3’s efficiency is its greatest strength. By ramping up the over-the-top action with new traversal abilities and Gore Tools, Shadow Warrior 3 is the series’ most enjoyable instalment yet, and a strong recommend for shooter fans.