Voice of Cards: The Forsaken Maiden Review – To the seas!

I had a lot of stuff on my 2022 gaming bingo list. One that absolutely wasn’t there was a follow up to last October’s original Voice of Cards from Square Enix. Only a holiday and a few months later, we already have two titles in this underdog fantasy adventure series crafted entirely out of card assets. Voice of Cards: The Forsaken Maiden is this very sequel.  This title now proves even further that Square Enix and beloved Nier creative director Yoko Taro have a little unique hit on their hands. One that is, more than ever, well worth checking out.

Like its previous entry, The Forsaken Maiden is an adventure with high fantasy. The game kicks off quickly, with an introduction to its world brought about by a newer Game Master narrator than the one prior, though one just as strong. You are an anime-Esque pretty boy with a name of your choosing. You’ve found yourself situated in a world with a series of islets. Each of these islets has a ruling maiden in the North, East, South, and West. Accompanying you is Lac, a spirit that scarily resembles a puppet, and Latys, a young woman who once unsuccessfully trained to be a maiden. Wanting another stab at it, our hero accepts the call to adventure, travelling across vast seas to these islets in order to reach all of the maidens and obtain their prized relics ahead of a final ritual. Along the way, various hijinks ensue.

This is a setting so simple yet strong that could only come from teams such as those involved in this very franchise. Plenty of silly encounters occur in-game, including random events that’ll see players rolling a dice to see if they successfully shoot down a piece of fish from a tree or catch a fish from the ocean. Other occasions had me stumbling onto weird characters on my journey’s path, providing a scene of hilarity before leaving just as soon as they were introduced. These alone had me chuckling from time to time and offer great means to further develop the characters’ personalities, without the use of voice acting. Juxtaposing this, moments of the game brought me close to tears as I learnt more and more about why Latys’ previous attempt to become a maiden was fraught. The maidens’ stories bring their own moments of depth too. Questions become raised about whether or not it is fair to put this much trust in a figure of importance. This idea echoes when you meet another maiden to be, yet to prove themselves, highlighting just how high a pedestal they’re put on.

Following my wrap-up of the game, I have but scarce few complaints about The Forsaken Maiden. The writing is actually stronger than its predecessor, providing time for an even bigger cast of characters to each shine individually. However, this is a game where your supporting cast of Maidens changes from chapter to chapter with each islet change. Your time with these figures is short but sweet, resulting in nice moments but also less time in terms of character development and party dynamics. If you’re more of a nitpicky individual, you will also witness some repeating NPC assets from the first game but that’s more indicative of the tight turn-around between products. This is something also entirely forgivable because it also feels like the team managed resources and prioritised the strength of the story and world delivery.

Whether it’s the small tidbits of lore you’ll find on the flipside of character cards or moments that are big or small, all of the writing and world truly has that known and beloved Yoko Taro touch. This writing is palpable on its own merits but is only bolstered when you consider the environment and character art by Kimihiko Fujisaka and the orchestral soundtrack led by Keiichi Okabe. Study some of the character’s cards and you’ll find weird but captivating little pieces of their outfits. Similarly, Okabe once again has these pieces of music that are chilling and lyrics that feel like a weird hybrid of Celtic and Latin with instrumental oddities.

All of these moving parts do well in complimenting the table-top style adventure The Forsaken Maiden is offering. At its peaks, the vibes are rife. Music will reach its crescendo, strong voice acting from the Game Master intricately details exchanges and the cards’ art are vivid and concise. Two entries in, it’s becoming clearer that Voice of Cards is offering adventures more vibrant than anything I’ve seen for some time. 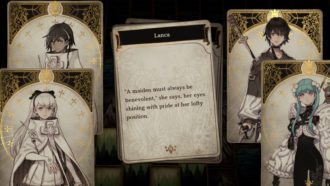 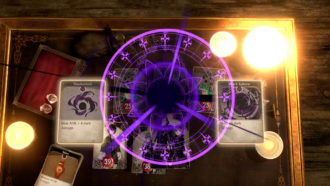 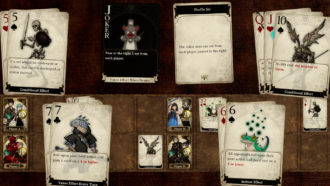 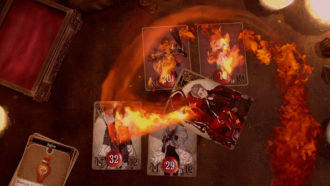 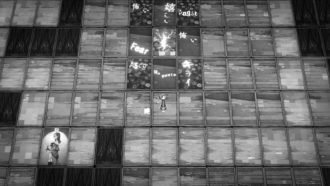 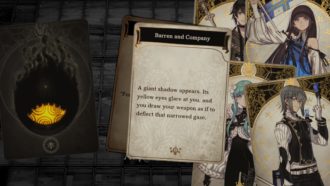 Translating combat and exploration into some old fashioned table-top fun

Combat in Voice of Cards: The Forsaken Maiden is turn-based, dictated by a number of factors such as dice rolls and gems required to perform different level attacks. While not by any means as deep as some other turn-based games, once more the vibes that occur in these combat sequences do well in their immersion. Let me paint you a picture. You’ll wander around the overworld, travelling from card tile to card tile before running into a random encounter. Then, a secondary table surface appears, serving as the battlefield for these encounters. Gems will fill up a little box to the side of your stage. You’ll bate your breath as you perform a dice roll, hoping to get off a critical or bonus status effect against your enemy. Perform a move and the character card will dodge and weave around the board, swinging in fashions to simulate casting a fiery spell or swinging a sword. Explosions and magicks will rip apart the table… cards can pertain a crumpled appearance when they get a defence debuff… intricate care is taken to both animate and paint cards in such a way in these battles that all that’s left to do is just stare in awe.

Players especially in late-game will want to get to know their party members’ abilities, equipment, and items intimately. The final boss in particular saw interesting juggling of feats. One of my members was constantly using an ability to regen gems so that I could constantly put out high energy moves. Another was constantly putting out heals and removing any debuffs. It was up to my last two partygoers to put out as much damage as they could all the while my foe would unleash devastating attacks and self-heals. The fights on offer are nothing if not engaging.

Outside of combat, those wanting to get their adventuring appetites quenched will have plenty to do. Making this adventure set in the seas offers plenty of discovery to be found in deeper and darker parts of the ocean. Moving that little pawn piece over each tile card, uncovering the next, leaves a constant sense of discovery for what’s next. What that may be is treasure hunts brought upon by prompting clues, the aforementioned random events, hanging out in cities, and playing the in-universe card game (yes, really) within this card-based game, hoping to win a fight of numbers against either NPCs or other enemies online. The Forsaken Maiden even goes one step further by adding new things into the mix not found in its counterpart. A brief stealth segment occurred deep in some catacombs in one chapter while another saw me moving across a field between battles, defending monsters from entering a town. They’re not much to write home about but I’m at least glad they tried something new.

While I completed The Forsaken Maiden in under 20 hours, all these options will do plenty to satisfyingly extend that time out further. There are occasions my adventuring immersion on Switch was slightly hindered with some lag in intensive combat and some slow loading screens, but not enough to ruin the experience. All in all, there is a strong sense of journeying and things to do.

Voice of Cards: The Forsaken Maiden now proves this is a viable franchise that Square Enix should hold onto. While it doesn’t exactly reinvent itself and sometimes has some technical hitches, it’s simply a great and fun follow-up to lose yourself in for a few hours without demanding all that much. The talented and beloved team are pretty much on their A-game, bringing an excellent experience of gameplay, visuals, audio, and storytelling. With this, I can wholeheartedly recommend a journey into the deep blue sea. You won’t regret it.