If there is one thing Square Enix has managed to consistently bank on, it is the dedication and love their fanbase has for their “classic” back catalogue of titles. On one hand, Square Enix has been striking out hard with some recent releases (looking at you, Babylon’s Fall), yet has been using their other hand to periodically feed us remasters, remakes, and ports of their old classics. As a major Square Enix sweater, I have been consuming these nostalgia-grabs with furious gluttony; I enjoyed Legend of Mana Remastered a great deal, and Trials of Mana was a contender for my personal Game of the Year in 2020. While the Chrono title we really want is Chrono Trigger remade, I was delighted to see the announcement of Chrono Cross: The Radical Dreamers Edition, and, despite some seriously glaring issues, I still enjoyed my return trip to El Nido.

There is a lot to love about Chrono Cross, and these aspects remain intact in Chrono Cross: The Radical Dreamers Edition. The colourful world, the unique character portraits, the sensational soundtrack, and the innovative turn-based combat that was established way back in 1999 are still here and still strong for this 2022 remaster. The variety of locations, while not having as much depth as other JRPG counterparts such as Final Fantasy 7, 8, 9, or Xenogears, give the world of Chrono Cross depth and diversity that keep things interesting as the dimension-hopping narrative rolls on.

The tropical archipelago that is the setting of Chrono Cross is a delight to explore, and early in the game players are able to journey across the world and enjoy the various locales on offer. In a genre that so often handholds and locks off areas until the story dictates, this is a welcome element of freedom that Chrono Cross: The Radical Dreamers Edition provides. In the context of 2022, the number of locations and destinations is a little thin, so it wasn’t long before I had seen it all and was ready to press on.

Similarly, the music in this game is just phenomenal. Much like Chrono Trigger, composer Yasunori Mitsuda absolutely nailed it with the soundtrack of Chrono Cross, and in Chrono Cross: The Radical Dreamers Edition, the tracks are lifted to another level with the remastered audio. I am a big nerd for video game music, and Square Enix has a knack for lifting the standards of their soundtracks every time one of these remasters comes around.

“…as the game has over 40 playable characters, being able to throw the game on fast-forward and whack on auto-battle made grinding a breeze.”

There are a number of features implemented in Chrono Cross: The Radical Dreamers Edition that makes returning to the now two-decade-old title painless. These include the ability to switch enemy encounters on or off, a battle enhancement feature to make combat easier (all enemy attacks miss, making bosses a cakewalk), an auto-battle function, and a fast-forward and slow-motion toggle. I mixed and matched these various features over my time with the game, depending on my needs at the time. As levelling in this game is a fairly unique beast, being able to turn off enemy encounters at certain points is an absolute god-send. On the flip side, as the game has over 40 playable characters, being able to throw the game on fast-forward and whack on auto-battle made grinding a breeze.

Perhaps the most interesting addition in Chrono Cross: The Radical Dreamers Edition is the text-based adventure (and the remaster’s namesake), Radical Dreamers. A translation of the up-to-now Japan exclusive is included in the package and is certainly worth a look for those who, for the last 26 years, have missed out on this unique piece of Chronoverse history.

With all that out of the way, there are some issues with Chrono Cross: The Radical Dreamers Edition that must be addressed. First and foremost is the woeful framerate; PS1 games didn’t always run the smoothest. Once you take away the rose-tinted glasses that are often adorned when remembering the classics of our childhoods, you can see the cracks, tears, and wrinkles that existed. Unfortunately in the case of Chrono Cross, these framerate issues are truly egregious and hinder the experience in a major way. Traversal and interaction with the overworld is frequently interrupted by chopped frames and glitches, and running the game on fast-forward mode exacerbates the problem tenfold.

“…I would build up my team’s Element grid in order to pull off some powerful moves, and the framerate would spike or dip in the wrong moment…”

I found that these issues were most prevalent in combat, with the framerate dropping into what felt like single digits. One of the major highlights of Chrono Cross is the flashy animations and creative design work surrounding the Element system, and these framerate issues considerably take away from the enjoyment. Too often I would build up my team’s Element grid in order to pull off some powerful moves, and the framerate would spike or dip in the wrong moment and ruin the experience. Add in fast-forward, and often the screen would turn into a blur of messy colour and jagged edges; not the bright and exciting combat experience I remember.

There is also a harsh clashing of graphical styles brought to the forefront by the upscaling of the character models against tired, old pre-rendered background environments. One in particular, about halfway through the game, ends up looking like a mushy bowl of Fruit Loops smeared across the screen, with a UHD character model running over the top of it. This issue is prevalent in basically all areas of the game, and perhaps is an unfortunate side effect of how PS1 JRPGs were designed. That said, when the menus, character portraits, music, 3D models, and an entire extra game are included, the ugly pre-rendered backgrounds stick out like a sore thumb. 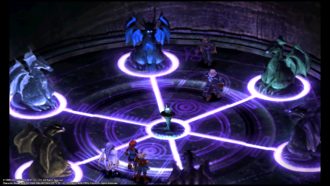 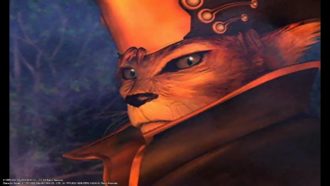 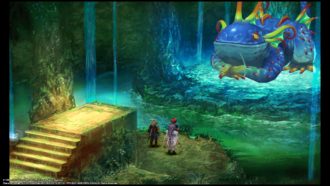 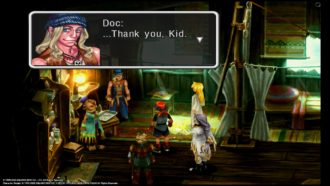 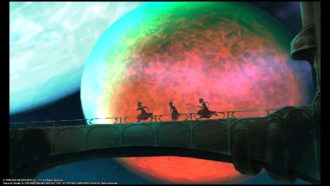 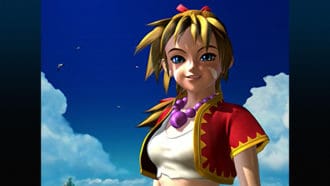 Chrono Cross: The Radical Dreamers Edition is held up by the quality of its foundation in Chrono Cross proper. Radical Dreamers is a lovely addition, however the remaining of the aspects of this remastered package really isn’t quite up to scratch. My personal love of the franchise aside, this remaster is a tired, lazy answer to fans’ calls for more from the Chronoverse. Players have come to expect more from a remaster and remake, even from the same publisher.

I had a lot of fun playing Chrono Cross again; the unique spin on turn-based combat, colourful locales, and dimension-hopping narrative was a joy to re-experience all these years later. However, through a critical eye, Chrono Cross: The Radical Dreamers Edition leaves a lot to be desired. Glaring issues with performance, improvements, and graphical inconsistencies take away from the truly great source material. This lack of care and attention to detail flies in the face of some of Square Enix’s other remaster works, and is a disappointing black-eye on what could have been a truly great remaster package of a still phenomenal classic JRPG.