Evil Dead: The Game Review – How Ash got his groovy back

Good, bad, I’m the gal with the game. Evil Dead: The Game has been summoned from the depths to possess your free time, and if my experience with the title is anything to go by, you may not be all that inclined to resist.
J̴o̸i̵n̸ ̴u̴s̴.̵.̴.̸

Evil Dead the Game encompasses the entire franchise’s on-screen presence, from the 1981 original to 2015’s Ash vs Evil Dead, so there’s something for everyone here.

Evil Dead: The Game is two games in one, depending on if you want to vanquish evil or do evil, reminiscent of Dead by Daylight. For the humans, it’s all about working as a team to complete a number of objectives across the map, scrounging for supplies and weapons along the way. You’ll start off hunting for a map, then move on to bigger goals, ultimately throwing down with the dark ones themselves in a final effort to vanquish the deadites and claim victory. The key to reaching said victory is teamwork though; being a “lone wolf” makes you an easier target that will likely need rescuing down the line.

With teamwork being so paramount, it’s awesome to see the huge roster of characters available to play with in order to figure out what role you enjoy most. You have the likes of Cheryl Williams who can act as a healer, Kelly Maxwell who’s able to cause bleeding when she shoots enemies, and four different versions of Ash, because come on, hail to the king, right? You’re also able to not only level up into a skill tree as you play, but even accumulate points that can be invested into other characters regardless of who you’re playing as, which is a really nice touch. If Army of Darkness Ash is your main, you can still level up the others!

Taking on the role of the villain will have you play in a swaying first-person view that is able to fly over terrain and blast through certain structures, which is a brilliant recreation of the unseen entity from the films. Your job as the entity is to prevent the aforementioned humans from succeeding, which you accomplish by summoning deadites, laying traps, and growing stronger through the damage you cause to their bodies and psyche.

From my experience, it does take more practice to feel as though you’re playing effectively, but it’s certainly still fun to swoop around and sneakily harass a player who decided to run off on their own, seeing how much you can make them regret that decision. As someone who only ever enjoyed the survivors in Dead by Daylight and other similar games, it really should be commended how fun both sides of the coin are to play here, with each having such differing approaches that still manage to mesh really well.

As an added touch, you’re able to play as the human team against an AI entity and even play entirely on your own as a human with a team of bots. They aren’t the brightest bulbs, but this mode is handy for acclimating yourself better with the map and some of the game’s mechanics. If you’re feeling shy, have at it!

Finally, you have the Missions, solo experiences that function as small side stories and also net you some unlockable content. These can be quite tricky, especially since you have no one to back you up, but the rewards are worth the attempt and it’s nice to see just how much content has been packed away into this title. Mission 5 needs a checkpoint though, good lord… 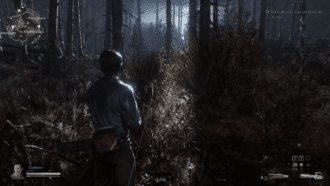 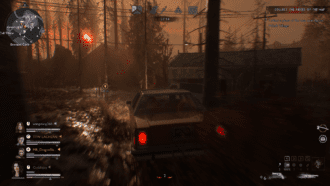 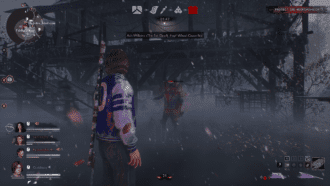 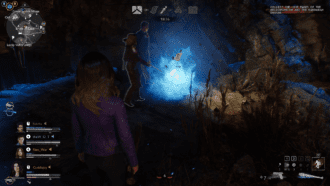 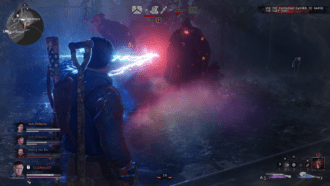 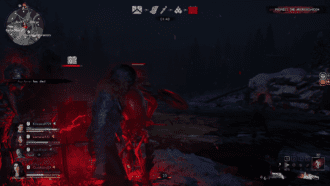 Now when it comes to how Evil Dead: The Game actually looks and feels, they knocked it out of the park. The way the moonlight flitters between each and every tree, the open and yet still claustrophobic environment—the presentation for this game is truly on point from the minute you step into your first game. The music and sounds are just as memorable, hitting at just the right moments and ramping up when things are at their tensest, only to quiet down to lull you into a false of security… then JUMPSCARE! No really, the entity can do that, and it gets me like every time.

From launch there’s only the one map, but it’s packed to the brim with a variety of locales, from the dreaded cabin to a campsite and even a crashed plane. What I really love though is that there’s a weather and time system for the map for each time you play, so even though it’s the same map, you may have to contend with heavy rainstorms or a layer of powdery snow. More maps are confirmed to be coming, so hopefully a more impressive lineup will be available in the future.

If there’s anything to fault the game for, it would be its launch-day hiccups. As of writing, there are a number of random issues that can occur while playing that can either be brushed off momentarily or ruin a match, and while I imagine they’ll be resolved fairly quickly, they still ought to be mentioned. For one, there’s the occasional freeze that will last about a half-second and cause your character’s hair to go all over the place like a Splatoon kid. Weird but manageable.

The real issue has been players who get caught in pockets of terrain or have their inputs ignored until being struck by a deadite due to a glitch, which can be a run killer as it leaves you a player down until they’re free. In my 22 hours with the game, it has happened to me twice, so take that for what you will.

“The presentation for this game is truly on point from the minute you step into your first game.”

While that may raise alarm bells for some, ultimately I still fell in love with the game, and really, that seems to be what birthed Evil Dead: The Game in the first place. The films and the show are renowned for being beloved by fans but always struggling at the box office, so to see a videogame of this calibre be created really needs to be appreciated. It really is commendable that the game has turned out as well as it has.

Evil Dead: The Game is a blast. You have a good mix of humour provided by a number of returning cast members, bloody and weighty action, and just enough horror to keep you on your toes, a perfect spell to have you wanting to go another round. It’s not a perfect game by any means, but if you’re an Evil Dead fan then it may well be perfect for YOU, and really, isn’t that enough?

Evil Dead: The Game is a no-brainer for fans of the series and even horror fans in general, capturing the best elements of what makes Evil Dead so memorable and weaving them into a great experience to share with friends or even tackle alone. While it may have its flaws, the dedication put into this title is obvious from the get-go. If you’re tired of running from what bumps in the night and want to get some payback, this is the game for you. “Come get some.”