Making a complete switch from the bright and colourful landscapes of Carry Castle’s last two games, Everything Must Fall and Zen Garden, Source of Madness is a Lovecraftian side-scrolling roguelite littered with monsters and darkness. With a few terrific roguelites swarming our ‘games to play’ piles right now, Source of Madness looks interesting but suffers a grim fate.

Embark on a nightmarish odyssey

You play as an Acolyte who sets foot into the nightmarish Loam Lands, armed with magical powers sourced from cosmic rings and items. Throughout this world are detailed, stygian environments abundant with unfathomable beings with tentacles, antennae, several eyes, and distorted limbs—all unique to each other. Your goal is to uncover the secrets of the Tower of Madness, the moon’s mysterious Citadel, learning from the experiences of each Acolyte that faces these unknowns and never returns.

On paper, Souce of Madness is an absolute feast for fans of Lovecraftian horror. It looks fantastic in screenshots and videos, the creatures are all individually terrifying, and the world and roguelite gameplay lend itself to the universe well. However, the reality is a little less exciting. The narrative is vague, shrouding everything behind a layer of cosmic horror that feels like a lazy choice. Interactable NPCs in the Tower of Madness talk in riddles, often not explaining too much to maintain the atmosphere. Others are simply ‘mad’ and are purposely a waste of time to speak to. As the Acolytes progress further and unlock more, additional revealing dialogue comes into play. Still, it’s sort of like trying to untangle the world’s largest knot—picking out new threads but the solution doesn’t get any clearer. 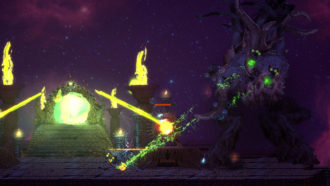 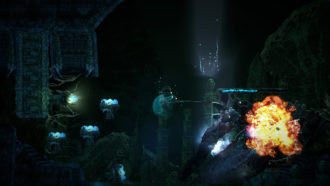 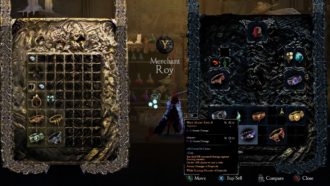 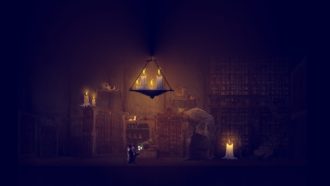 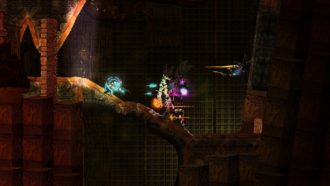 Admittedly, it’s often more about the gameplay when it comes to a roguelite. Source of Madness has a fairly standard structure for the genre while switching it up with its magic mechanics. Players find rings throughout the world that gift different abilities; some will slash, others cost life and leach health from enemies, and there are rings that pyromaniacs will love. There is a great variety here with unique strategies for each element and buff that can be exploited. Finding the right combination with the best gear makes your Acolyte feel like a Sorcerer Supreme–although items don’t change your look which is an unfortunate exclusion.

Discoverable gems provide bonus abilities, too. A magic shield that deflects attacks and floating sentries for supportive fire are just a couple of the options you’ll come across. They’ll definitely help you get out of sticky situations, along with a dash that can be upgraded before the start of each run.

You acquire blood points and other currencies when you defeat monsters, which you keep and utilise at the sprawling skill trees towering over the unlucky Acolyte next in line. Only a magic missile spell and a slashing spell will be available to the first Generalist class member you pick and class improvements or healing supplies may be obtained with progression. The way the skill tree is presented in the world of the game is superb, pumping the blood of the Outer Ones through the caverns of the Citadel and upgrades feeling distinctly useful.

“monsters flail around with incredibly floaty physics, moving randomly with what seems like no strategy or reaction to the Acolyte’s movements.”

The game forces you to slow down and farm the spongey creatures for these upgrades. It adds repetition to an already repetitive genre, in a way that should be fun but isn’t. Although, the developers are focusing on making progression more exciting in future patches, along with changing how the monsters work using feedback from Early Access players. There may be light at the end of the tunnel.

Using a controller, you can hold down both triggers to fire the same rings at once and then not have to do much else besides move out of the way for certain attacks. Monsters flail around with incredibly floaty physics, moving randomly with what seems like no strategy or reaction to the Acolyte’s movements. It can also be difficult to identify when they are attacking with the damaging limb or just swinging their several harmless tentacles around. These are supposedly machine learning AI that adapts to how you play, but it doesn’t feel like that one bit. Undoubtedly, the beings you face are extremely grotesque, but defeating them isn’t always fun.

Source of Madness has this low-gravity feel to it that some people may like and others will despise for being so slow. It can sometimes feel like you don’t have a lot of control over your character, especially when you’re waiting for the dash to cooldown. Often the camera will zoom in very tightly and not always centre on your Acolyte, causing frustration in chaotic fights or when a monster is firing projectiles just off-screen. 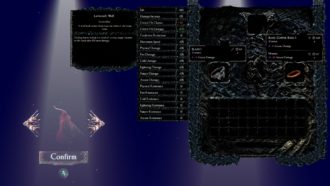 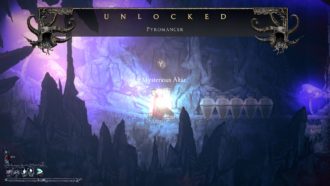 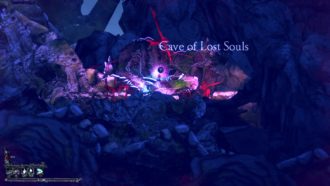 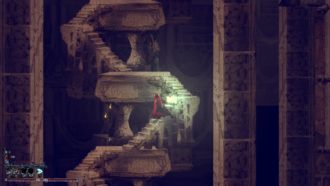 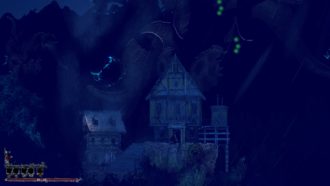 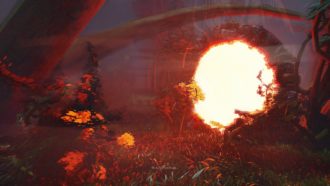 The options menu is very bare. Two audio sliders are available for Master and Music, standard video options with an awkward interface, and no accessibility options besides remapping keys. Changing resolution was a struggle with a small bug forcing the game into the lowest resolution and requiring a restart. Yes, this is a Unity Engine game, but that doesn’t excuse the fact it should have at least intuitive settings options.

The in-game menus and user interface aren’t great to look at, either. It’s an awful mess of grey and squiggles. The font chosen for these menus is delicate and not easy to read unless you’re up close to the screen, especially the smaller text in descriptions. Sure, you can make the UI larger so it’s easier to read, but at the cost of the entire screen being occupied by menus. Using the inventory menu several times to very quickly swap items in the midst of the journey is a challenge if you’re not sitting still in a peaceful area. While it all fits the amazing atmosphere, it doesn’t make for an enjoyable playing experience.

“The art style of Source of Madness is going to be a selling point for many… The visuals all come together to nail the feeling of doom and despair of cosmic horror.”

The art style of Source of Madness is going to be a selling point for many. Everything in the Loam Lands is illustrated elegantly, with fine lines and detail in every element. While the colour palette isn’t vast, it varies enough with dark reds and blues mixing together with more earthy tones. Depth in the world feels almost like a puppet show, with how character models move around against 2D layers. The cutout aesthetic surprisingly works with the theme and is graphically timeless. It’s remarkable that all these environments are randomised each run and still manage to feel different each time. The visuals all come together to nail the feeling of doom and despair of cosmic horror.

Audio quality is hit and miss. The score of church choirs and twinkling notes softly in the background certainly fits the part and sounds graceful. What needs work is the sound effects. Bass-heavy creatures and attacks aren’t normalised properly and turn into a disaster of distortion. Monsters themselves aren’t distinctly identifiable from their cries, either. Despite them all being procedurally generated and unique from one another, they all just look and sound like the same big nightmarish being.

Visually, this is a cosmic horror fan’s fantasy. Nameless creatures and an accursed world are all procedurally generated for a unique experience in each run.  The downside is the incredibly disappointing gameplay often layered with grinding, camera and control issues, underwhelming combat, terrible UI, and repetition beyond the norm for a roguelite. Accompanied with a few haunting bugs here and there, Source of Madness is merely a shadow of more enjoyable games.