The Centennial Case: A Shijima Story Review – Praise be the FMV

The Centennial Case: A Shijima Story follows the adventures of Haruka Kagami, the author of a series of mystery novels. From the get-go, her know-how in this space is immediately required and put to the test. She, along with her editor, is tasked by an ex-collaborator named Eiji to investigate a number of things including an elusive fruit known to provide the effects of agelessness, the unearthed skeletal remains that lie under a cherry blossom tree, and a century-long mystery surrounding the Shijima family from which the collaborator is from. These are but some of the memorable, cinematic experiences in-game you’ll come across. With it comes a riveting type of FMV (full motion video) story you’ve never seen before.

If you haven’t hazarded a guess prior, The Centennial Case is a game crafted and shot entirely in live-action. A decorated cast of characters and actors, all Japanese, make up who you’ll be spending time with in-game. You’ll explore various locations as the tangled mystery gradually reveals itself to you. This cast includes not just the Shijima family, but some of the staff they have around their private estate. Before long you learn to solve the most recent incident—the remains found on the Shijima property—and you’ll have to get to know the family intimately. That’s a well that goes immensely deep, with delicate, sweet intricacies and ugly secrets.

The family is made up of three brothers, a patriarch, and a more recent partner. Through elegant storytelling and character interactions, you bear witness to the scale of how the Shijimas is a family truly fallen from grace. Whispers of this aforementioned fruit, tantalisingly teasing agelessness, drip-feed into conversation and echo throughout the halls. Some aren’t all convinced of its existence, whilst others dedicate their entire life to it, evidently damaging their relationship with those around them. Some share this same space on the Shijima property, such as the groundskeeper, though they’re evidently not as privy to every detail, instead offering their own take on the feuds that take place. Every scene and interaction, no matter how minor, feels thought out in a significant way to distinguish and characterise each of the cast. Boil The Centennial Case: A Shijima Story down and it includes all the elements of an enticing family drama.

All that is mentioned prior takes part in the current day. Though, in the first chapter, Haruka finds a novelised story set in the Taishō period. This story takes place at an auction where a murder will occur. Most interesting and seemingly pertinent to the big, overarching case is the fact that one of the predecessors in the Shijima family appears and one of the items for sale is the fruit. This not only loans itself to offering more pieces of the greater mystery but bolsters the cast’s strength further. With the exception of some newcomers, the same actors appear as these new characters, getting to shine in new ways.

The cinematography, set, and costume design is really doing some flexing in these instances. The Shijima property is already home to some gorgeous sights, be it the cherry blossom tree or other courtyards and paths met with forestry. However, that’s taken further in these period pieces. The Showa period story is home to a tale in a club theatre. A series of small tables are spread around the main ground floor, many filled with patrons and cigarettes slowly burning out in ashtrays. The stage is captivatingly illuminated with a detailed backdrop. The men are in suits true to the period, while the women wear gorgeous dresses with stunning floral patterns. Colouring is key in each chapter too—the theatre sports a warmer more welcoming yellow tone before tragedy begets. The current day has harsher blues as you’re already amidst the havoc.

The Centennial Case: A Shijima Story is published by Square Enix, so if this all sounds high budget, there’s your reason. Most FMV games are a lot more condensed in focus because of a lack of funds. This is an example that goes all-in and is all the better for it. Unlike other genre entries where you just watch the story unfold having little control over making branching choices, here you’re also allowed to pause and rewind or fast forward the game by scenes or 5-second intervals. You can, with no intrusion, review who each character is and the clues you’ve picked up along the way at the bottom of the screen while everything plays out. The tech is there now for these more ambitious ventures in the genre. I can only hope this quality continues going forward.

Putting on your thinking cap

Breaking up the long cutscenes is some gameplay in the form of finally resolving the given mystery in each chapter. Near the end of each chapter, all the characters assemble in a room. Following the inciting incident and gathering of clues, players enter whats known as the cognitive reasoning space. Here, you will see a reel of relevant clips of scenes. The player’s task is to use their reasoning to create hypotheses. Laid out ahead of you is a series of blank tiles. Slots will be filled with tiles that posit questions such as “What is suspicious about the body?” or “What was x person doing at the time of the murder?” From here, you have to place the clues next to the relevant question, hence answering the question. This then turns into hypotheses. Create enough hypotheses and new questions will sprout up to be answered. Proceed through this loop long enough and you conclude your investigation, ready to present the facts to those in front of you.

“Boil The Centennial Case: A Shijima Story down and it includes all the elements of an enticing family drama.”

While not the cleanest way to communicate and encourage the player to make links and motives to solve each mystery, it is an engaging means of creating your own little version of a conspiratorial corkboard with an abundance of red string. Not every hypothesis gathered will pertain to the final piece of each mystery’s puzzle either. This allows you to consider every possibility each time a body and case to solve shows up. While not perfect, frankly this mechanic is one of the most plausible means of being that holistic.

Some of these hypotheses will also elude you from time to time. When they’re set to present their facts, players obviously must make sure they pick the correct hypothesis, present the correct clues, and in turn reveal the correct perpetrator. Players looking to get an S ranking on each chapter will need to make no mistakes and not use the hint system that is provided in the cognitive reasoning space. If you’re a player like me, achieving this perfection is of no concern to you, and so there’s plenty of aid when you need it. This hint system highlights clues and allows players to quickly see which clue belongs to which question. Additionally, the pause menu states the very rules of A Shijima Story. There are no accomplices, in any case, only one perpetrator. You can also rule out supernatural forces. This is the game’s effective way of giving it to you straight. Do not overcomplicate things. You’re welcome.

That’s perhaps what’s most joyous about the mystery solving. If I’m totally honest, I’m not always the smartest most logical thinker when it comes to these types of experiences. That’s okay. You can brute force your way through without too much hassle and not really be any worse off. If all else, I implore players to fail from time to time. There are recorded scenes when you get the answer and conclusion wrong. The results provide some chuckles as you offend some or are laughed out of the room by others. 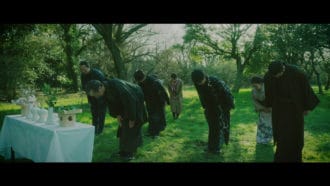 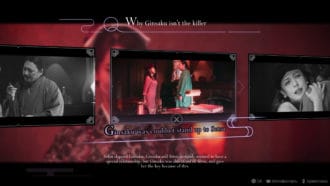 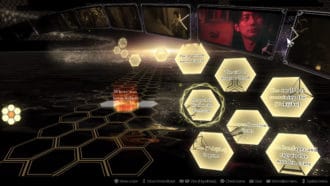 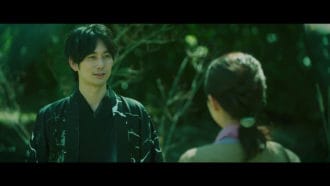 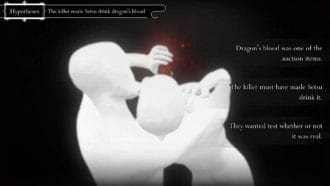 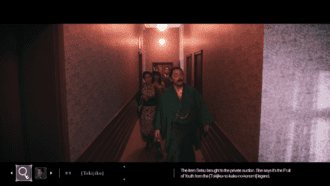 This loop of reasoning before finding your resolution holds up most of the way through. The only times it wavers is in the late stages of the game, where the cases get a lot more involved and convoluted. While these specific mysteries are thrilling, the mechanics behind them slightly stagger.

One final thing worth noting is that The Centennial Case: A Shijima Story is a hell of a long game. Running at somewhere around the 12-15 hour mark depending on how efficient you are at solving cases, it’s the longest FMV game I’ve come across. Where other genre classics such as Night Trap serve as shorter, more movie-length romps, this feels akin to an epic or season of television. Wrapping up the story, seeing each case resolved, I’d say the end justifies the means. The game is full of intriguing twists and turns, with only some minor exceptions. Just prepare yourself for the long ride that can test you at times.

As far as I’m concerned, this is a victory for FMVs. For every publishing misfire under Square Enix’s belt, they actually take some risks that come with a reward. This is yet another example. I only hope these weird oddities in the company’s catalogue continue forward.

The Centennial Case: A Shijima Story is a great game hurt only by its length and occasionally convoluted mystery mechanics. I’ve been around the block and then some with the FMV genre. This particular experience has certainly climbed up there in the ranks for me. With ambition and potential reached avidly, this is frankly a type of foray I haven’t played before. Provided are mesmerising set and costume designs, along with excellent character working and acting. Topping it all off is an enticing mystery and gorgeous cinematography to immerse you further. This is one for the books and a case worth investigating indeed.