Upon its release back in 2017, Cuphead stole the show with its incredible attention to detail, music, animations, and tough-as-nails gameplay. 5 years later and that same uniquely charming aesthetic and compelling boss-rush gameplay loop can be experienced with new content under the title Cuphead: The Delicious Last Course.

It’s a piece of DLC that we’ve known is coming ever since its 2018 reveal, but good things do indeed come to those who wait. It may not feel like 4 years worth of content to some, but if your expectations are appropriately in check, you’ll find yourself enamoured with some incredibly well-crafted additional content for an already superb game.

Cuphead: The Delicious Last Couse is a traditional piece of DLC and will therefore require the base game in order to experience the new content. Accessible fairly early on into the Cuphead base game, players will need to defeat only a couple of bosses and a mausoleum level before a mysterious character pops up, offering to ferry you across to a new isle. This is where we’re introduced to the delightful Ms Chalice, a third playable character who comes with her own predicament that Cuphead and Mugman are happy to help with!

“…find yourself enamoured with some incredibly well-crafted aditional content for an already superb game.”

The Delicious Last Course is a detour for our drinking-vessel protagonists. It forgoes the soul contract narrative of the base game and instead sees our heroes attempting to collect ingredients that will help permanently bring Ms Chalice back into the real world from a spirit realm. Chalice herself can temporarily swap places with one of our other heroes, meaning you can utilise her for boss fights whilst on the quest to save her soul. The DLC is of course still playable cooperatively, meaning two players can pick between the now 3 heroes on offer.

The Delicious Last Course is every bit as charming as the original game. I’m so glad I was able to revisit this title because I always knew it to be great, but upon reflection, I can really see what makes Cuphead a masterpiece. The jaunty liveliness of the world that’s been created, the challenging but fair gameplay loop that knows exactly what it wants to be and refuses to stray off course, the immaculate boss fights that feel so dynamic, each telling their own mini-story whilst never getting in the way of the platforming and action. Oh, and let’s not forget the 1930’s cartoon-inspired music and visuals that still remain to be some of the most imaginative and impactful across all of gaming. The Delicious Last Course loses none of what made Cuphead great, only finding ways to expand and amplify those strengths.

Six new bosses to fight is the headline of this DLC, though you’ll also find a few additional challenges, 4 new charms and weapons in Porkrind’s shop, and some sweet new movement options found within Chalice’s moveset. Playing as Ms Chalice comes with a pretty big advantage, as she’s able to utilise a double-jump, a parry-dash, and an invulnerability roll that comes innately with her kit. It comes at the sacrifice of a charm slot, though it’s a very small price to pay for these additional advantages. This initially felt quite strange to have one character undeniably stronger than the two others, although it quickly became apparent why Chalice is such a powerhouse. The new boss fights available in the DLC are frighteningly difficult, having access to Chalice and more powerful weapons at Porkrind’s shop helps to balance things out. Prefer more of a challenge? Well flip on over to Cuphead or Mugman and even pros will be put to the test.

The other benefit to having different playable characters of differing strengths is that you can now play cooperatively with somebody who may need the advantages Chalice provides. So long as we never refer to it as ‘girlfriend mode’, it can only be a good thing. Don’t make the mistake of thinking this now makes Cuphead an accessible experience, it certainly is not. Reacquainting myself to the challenge of the game took some time, regardless of Chalice’s advantages. Tackling bosses on easy mode doesn’t give you the ingredients needed to progress the story either, so know this before going in, Cuphead and its DLC are not welcoming to many gamers. Though as a glutton for punishment myself, that was never a personal issue. 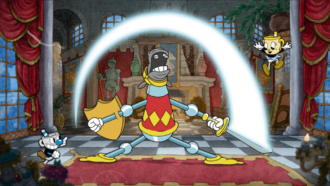 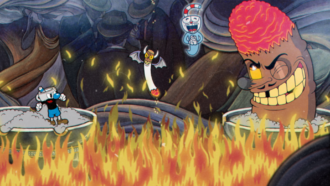 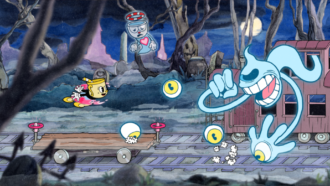 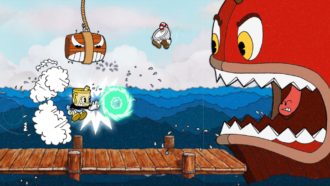 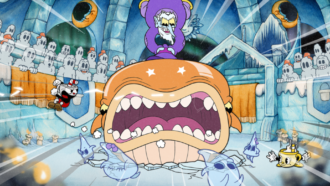 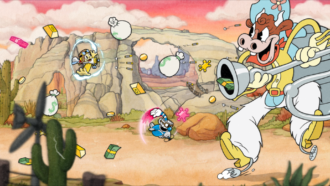 Being able to double-jump and parry-dash as Chalice makes the movement feel so good. Chaining together jumps into dashes that result in parries that reset your jump means you can spend way more time in the air and you feel like you have so much more control over the movement. It’s a brilliant advantage that allows for even more chaos on the screen at any given time, with the player always having the tools at their disposal to overcome whatever obstacle comes their way.

I don’t want to spoil any of the boss fights in detail, but know that they’re every bit as good as what you remember from the base game, if not better. Sometimes you forget just how much cool stuff is occurring in the background as you focus on the foreground threats, but for those able to split their attention, you’ll notice an incredibly animated scene plays out each and every time that’s just so entertaining. It’s a multistage journey that’s basically a mini cartoon and a game impressively combined into one. Studio MDHR clearly knows where their strengths lie, because they’ve focussed almost entirely on those boss fights in the DLC, with no run-and-gun stages to be found.

The DLC also features a compelling conclusion to the story and a little mystery that’s quite fun to deduce. I won’t spoil either for obvious reasons. Once you complete the DLC, you can then continue your journey through the base game with the ability to play as Ms Chalice and gain access to the new weapons and charms provided in the DLC. Everything feels connected. Cuphead and its DLC are immaculate with no shortcuts taken or bugs present that would indicate something of a lesser standard.

If anyone were to take issue with the DLC, it would be a problem of lofty expectations and length. 3-4 hours in and the DLC was over, a better player able to finish even faster. Know that what you’re getting is a slice of extra content that’s scrumptious but ultimately fleeting. Know this and you can’t possibly be disappointed by the supreme quality on offer in this piece of additional content.

Cuphead: The Delicious Last Course is ultimately a very impressive release. It takes the best elements of the base game and finetunes them to incredible success. The marriage of tight gameplay and fun narrative animations in an impeccable and memorable aesthetic is undeniably powerful. The DLC may not be as long as some may want, but should your expectations remain in check, you’ll find a superb addition to an already phenomenal game.