Explore a scenic archipelago in The Elder Scrolls Online: High Isle and the Legacy of the Bretons, the newest Chapter in the now eight-year-old MMO. A story of deceit and corruption hidden within bayside towns are coupled with new companions and an intriguing in-game trading card game. After our preview earlier in the year, does this more grounded tale add value to an already abundant world?

The narrative of this year’s Chapter revolves around political intrigue and the infamous Three Banners War. While a summit is being hosted by the honourable Society of the Steadfast, the Ascendant Order has anarchic goals surfacing from the shadows. Over millions of Elder Scrolls Online (ESO) players are now exploring this island paradise rich in culture and architecture, beautiful castles and exciting tournament grounds.

Adventurers will crawl through the jungles of the prison island Amenos, just north of the High Isle. This lush place is home to political prisoners, criminals, and dissidents that have a mischievous part in the story. Exploring these two zones will give players plenty to do with extra content littered throughout. There are always new quests or items of interest popping up and hundreds of hours of content to play (that’s ignoring all the previous DLC content you’ve missed).

“High Isle’s main story has fewer stakes and as result feels not nearly as impactful.”

Admittedly, High Isle doesn’t have an iconic villain to love or hate, unlike Mehrunes Dagon in last year’s Blackwood Chapter. It focuses more on the complex affairs of Tamriel and the Ascendant Order. The characters along the journey are well-crafted, with likeable personalities that don’t get annoying or feel too wooden, like Lady Arabelle Davaux the former member of Lion Guard and Ring of Daggers who you meet early on.

The plot line and construction of the story are not as engaging as in the previous DLC. It’s undoubtedly a more grounded adventure, which is a pleasant change from the big and bombastic events of last year’s content. Even so, High Isle’s main story has fewer stakes and as result feels not nearly as impactful. 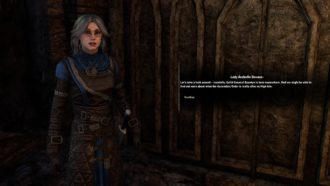 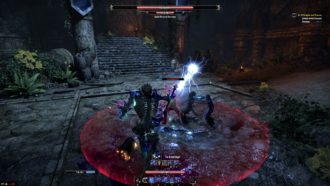 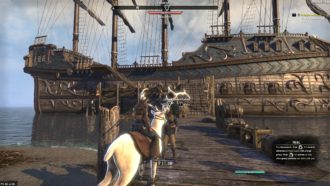 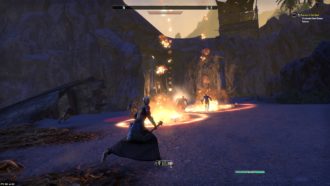 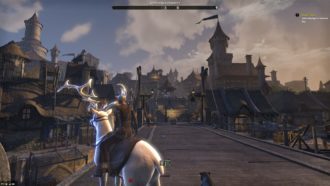 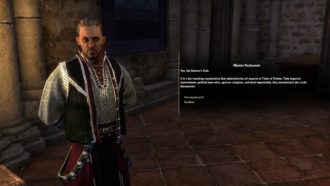 Explore the world with new friends

After Blackwood’s success introducing companions, fans are stoked to get two new friends to explore with. Ember and Isobel are clearly huge improvements upon Bastian and Mirri, with more personable and relatable characterisation.

Isobel Veloise is an always enthusiastic Breton noble who journeys alongside the player as a Templar. Improving her rapport and approval rating unlocks fun questlines that build upon Isobel’s backstory and possible ex-lover, Aurelia. Ember is a Khajiit Sorcerer with a rough upbringing. Her quests take you through a short but absorbing story about finding the lost members of her family. Ember and Isobel’s skills aren’t only visually impressive, but they are useful in combat situations… even more useful than some adventurers found in matchmaking.

These two new NPCs are great additions to ESO’s companions, building upon the originals and hopefully marking the path for more captivating storylines and solo content for the MMO.

“Ember and Isobel are clearly huge improvements upon Bastian and Mirri, with more personable and relatable characterisation.”

The Volcanic Vents are a relief after a disappointing year without world events. Players from all around Tamriel band together to take down one common enemy. Unlike Greymoor‘s difficult Harrowstorms, they aren’t as challenging and climactic and eventually become grinding hotspots as stronger players with great gear sets join in. The end boss for the world events could be a bit stronger, but the feeling of collaborating with other players again at these insurgencies is always great fun.

The major downside to High Isle is the lack of Alliance War player versus player (PvP) content. The community has been asking for serious attention to PVP for the last few years with no luck. Zenimax Studios admittedly wants to focus on improving the performance of the MMO before building upon the honestly rough Alliance War. It’s a shame given the main storyline relates to the Three Banners War and some sort of narrative tie-in could work so easily. Still, the neglection is whittling down the numbers of PvP players daily, making it harder to prioritise over ESO’s more popular story and trial content.

Dread Sail Reef allows up to 12 players to tackle a gambit of pesky pirates and terrifying monsters. It starts with your group storming an island held by enemies and ups the ante as the expedition progresses. Similar in size and scope to Rockgrove from last year’s ESO: Blackwood Chapter, you’ll know what to expect. It’s more exciting action for you and your friends.

Bosses are varied with multiple mechanic twists to keep you on your feet. For example, the Reef Guardian fight is similar to the Earthgore fight at the end of the Bloodroot Forge dungeon. The Reef Guardian will duplicate and split into up to four or five versions of itself, requiring fast thinking and a solid understanding of how the rock altars and area work to take down this foe properly. Lylanar and Turlassil and finally the gigantic Tideborn Taleria are both thrilling battles, too.

It may not be the longest trial, but it is incredibly well-designed. Running between the bosses entails more than simply knocking hordes out of the path. Even the cannon fodder has a few tricks up their sleeves, so you’ll need a smart strategy and crew to get through it all unscathed. Dreadsail Reef is easily the best trial yet. 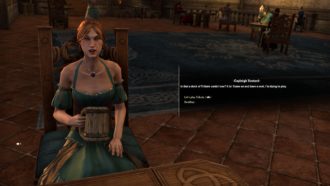 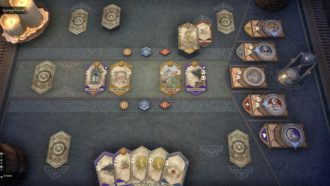 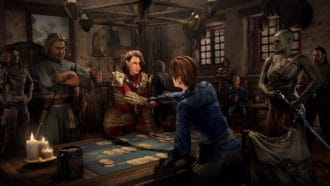 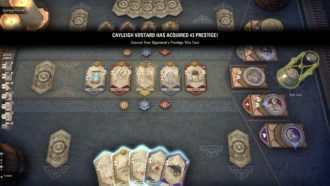 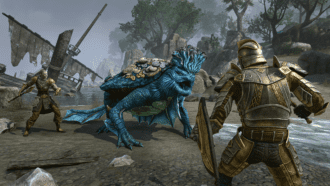 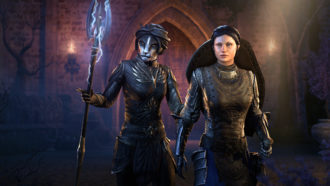 Well, how about a game of Tales of Tribute?

High Isle adds new adventures, a sensational trial, and a rich plot of political deception. However, Tales of Tribute, a spin-off digital card game where players build power and placate special Patrons is what sells the DLC.

The Tales of Tribute quest line begins at Gonfalon Bay. You may either go straight to the Gonfalon Gambling Hall or collect quest notes referencing the new mini-game scattered across the region. Whatever path you take, it will bring you to Brahgas, a Wood Elf voiced by Pippin from Lord of the Rings, who introduces the unique pastime.

This is a one-of-a-kind point-building game that originates in High Isle. At the start of each match, opponents choose from four unique Patron Decks to fill the tavern deck. These cards will be placed in the middle of the table for players to buy with coins and build their hands. Patron Decks include a series of cards tied together, like a suit with traditional playing cards. There are many strategies to try with eight unique Patron Decks to collect, consisting of around 20 cards and all with different mechanics and combos.

Each win earns alluring rewards through a rank system, such as furnishings, transmute stones, and even advancing a storyline by competing against specific NPCs. While the quests aren’t exceptionally long or exciting, Tales of Tribute is very addicting once you get the hang of it.

“Tales of Tribute is a standout for the High Isle Chapter.”

We spoke to Creative Director at Zenimax Studios Rich Lambert, who hinted Tales of Tribute could make its way to other platforms as a standalone game. Looking at the large layout of the interface alone, a mobile game is surely in the pipeline. One unfortunate downfall is that the tutorial lacks subtitles and can’t be listened to over again. An odd accessibility oversight for such a prominent MMO.

Unlike The Elder Scrolls Legends, it’s not as straightforward as it looks and takes some time to understand. Yet, it’s distinctive and Tales of Tribute is a standout for the High Isle Chapter.

Welcome to the sunny shores of High Isle, an idyllic zone and Chapter for The Elder Scrolls Online. The storyline is down to earth, with politics and conspiracy at the crux of a deep but a little less engrossing narrative. Companions Isobel and Ember are useful fighters with great character-building quests. While Volcanic Vents aren’t an amazing multiplayer activity, the Dreadsail Reef is a challenging but satisfying trail to grind impressive gear sets. However, the cherry on top is Tribes of Tribute, which you’ll spend too much time mastering the mechanics of the new in-game card tournament. If the lack of PvP doesn’t bother you, High Isle offers another year of excellent content for The Elder Scrolls Online.