Eyes in the Dark Review – Worth keeping an eye on

Eyes in the Dark: The Curious Case of One Victoria Bloom is a gothic twin-stick shooter roguelike platformer that mixes and matches a lot of features from previous exemplars in the roguelike genre to make something quite unique and special. While its monochrome art style and challenging degree of RNG might not be for everyone, the intricate setting and deep customisation options make Eyes in the Dark a game worth keeping your eyes on.

Shining a light on a family history

The game follows the titular Victoria Bloom, a young girl travelling to visit her grandfather, Victor, at the ancestral Bloom Manor. Unfortunately, Victor is kidnapped by sinister shadow creatures upon Victoria’s arrival. She then must delve into the manor to save him, armed only with a flashlight, a slingshot, and a time-travelling pocketwatch that resets time when she becomes frightened.

It’s about as much of a setup as a game like this needs, however, there are quite a few small touches with the presentation that I found charming. The story unfolds in four Acts, each bookended by cutscenes featuring silent movie speech cards. I also liked the new nuggets of information that Victoria learns about previous members of the Bloom family, and all the crazy adventures they had and inventions they created. It gave a fun sense of the amazing dynasty that Victoria is joining in her quest to save her grandfather, and I found it very delightful. 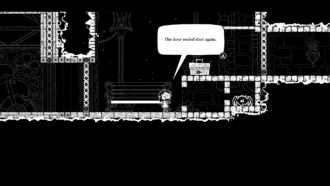 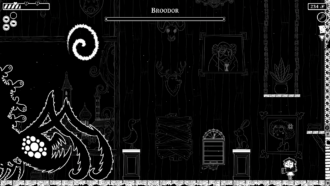 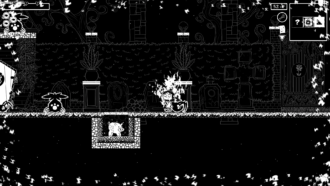 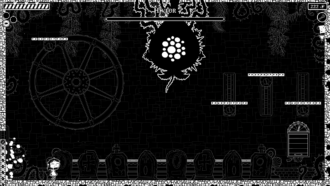 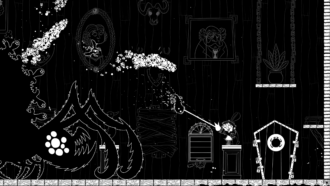 Alone in the dark

Fortunately, Victoria’s torch and slingshot are handier than you would expect during her adventures in Eyes in the Dark. The manor is covered in a thick fog that can be penetrated by your flashlight, revealing enemies hiding and waiting to strike. Not unlike in Alan Wake, your flashlight damages enemies, allowing Victoria to take down her foes like a Ghostbuster by keeping your beam on enemies and whittling down their health. You can customise your loadout with new bulbs, batteries, slingshot augments, and shoes to increase your damage, inflict status effects, and add more mobility options.

As with most modern roguelike titles, Eyes in the Dark provides permanent upgrades in the form of the Knowledge currency, which can be spent to unlock new starting items and merchandise in the mid-dungeon shops. Admittedly, Knowledge could stand to be more plentiful; you don’t earn many most runs, so it can take a while to save up for the truly useful permanent upgrades.

What I liked about this system was how the different upgrades worked together. Different items can synergise, such as a slingshot that inflicts burning damage, combined with shoes that heal you when you dash through a burning enemy. Considering chests and shops always provide a number of potential items to unlock, it encouraged me to be thoughtful about the upgrades I selected, and the varied options the game provides made customising each run rather enjoyable.

Unfortunately, while the usable items felt useful and empowering, I’m less enthusiastic about the Perks and Impediments system in Eyes in the Dark. Basically, each time you defeat a Guardian and unlock a new area of the manor, you are forced to pick a Perk and an accompanying Impediment. While the Perks, ranging from increased maximum health to lowered upgrade costs, felt helpful, the Impediments that you’re saddled with can be outright punishing.

This is the only area of the game where I felt that the RNG was out to get me. Impediments include stuff like reduced maximum health, increased enemy damage, and faster projectile speeds. These can outright suck and can doom a run if, for instance, all of the options are to reduce your maximum health when you are already low. These Perks and Impediments stack throughout your run as well, which can lead to thorny late-game situations if you have not had good options to pick from.

The sights and sounds of home

On the presentation front, Eyes in the Dark is no slouch. The groovy retro soundtrack is appropriately energetic, evoking that retro platformer spirit for the game’s tougher challenges.

Regarding the monochromatic art style, it’s a stylistic choice that I found less appealing. I appreciate that it plays into the 1920s black-and-white silent horror film aesthetic that was clearly a big influence on Eyes in the Dark. However, it also serves to make each wing of the manor visually blend into one another, and made discovering new areas less engaging as I knew it would be the same colour pallet the whole way through.

Going on a monster hunt

Despite not always loving the visual aesthetic, I certainly loved the designs of the various monsters and Guardians you encounter. They all share a nightmarish, insectoid theme that feels suitably Lovecraftian. Each monster and Guardian you defeat is catalogued in Victoria’s journal, including a short passage about their details which I felt was quite charming.

I rather enjoyed how Eyes in the Dark employed its difficulty curve. Although all the bosses are challenging in their own way, the difficulty of each Guardian scales with how many bosses you have already defeated in that run. As you get essentially free roam of the manor after defeating the first Guardian, you will get to know which bosses you find more difficult than others through experience.

As such, if that one Guardian that fights you as a duo causes you strife, you can moderate the difficulty by going after them early when their damage output is comparatively low. It goes back to the game providing options to customise your experience, which I quite appreciated. It’s no substitute for actual difficulty or other accessibility options, but it’s still a nice touch.

Eyes in the Dark is a great little roguelike platformer whose clever upgrades system and unique presentation are enough for it to stand out in a crowd. Although the Impediments system can leave your experience a bit too at the mercy of RNG, overall the variety of upgrades and difficulty curve ensured that Eyes in the Dark remained a fair and fun experience. If you are seeking a new roguelike to get invested in, you should definitely consider a trip to Bloom Manor.