The Klonoa Phantasy Reverie Series is a compilation of two Klonoa titles, those being Klonoa: Door to Phantomile for the original PlayStation and Klonoa 2: Lunatea’s Veil for the PlayStation 2. I wasn’t fortunate enough to play these back in the day, but even without the benefit of nostalgia, these titles feel amazing to play, and as someone who grew up in the golden age of mascot platformers, they truly feel like a sort of love letter to that era.

Across both titles, the fundamental gameplay is fairly simple, but the developers manage to do a great deal with what you’re given. Your wind bullets allow you to grapple enemies, which you can use to either shoot things or jump higher. This seems basic enough, but as you go on, they reiterate on this idea in a myriad of different ways that manages to constantly keep you on your toes and introduce new strategies you’ll need to utilise if you want to advance. Both games only use 2 buttons, Jump and Shoot, yet they’re able to do so much with this setup… it’s a testament to the overall quality of these titles as you’ll see going on, that while they may seem straightforward on the surface, the polish and finesse within them is outstanding.

Something I love about these titles has to be the way they compliment one another so well. While I definitely recommend starting with Klonoa 1 (for the story if nothing else), you don’t have to by any means, as both games have similar enough gameplay that you can segue into one or the other without missing a beat. That is not to say that Klonoa 2 made no improvements, far from it, but it makes use of the existing groundwork differently, so while you’re controlling Klonoa in the same way, you’re getting a different experience as you explore the world and lore.

A prime example has to do with the ways in which you traverse the stages of both games. While both take place in 3D spaces on a 2.5D plane, Klonoa 1 loves to play with perspective, requiring you to use certain scenery to alter the plane you’re operating on in order to progress; you’ll comfortably snap into your new direction quick and easy. Klonoa 2 meanwhile focuses more on operating within larger spaces that the first game wouldn’t have been able to render back in the day, allowing you to travel into the background or foreground to gain a whole new view of the area you were in.

I played through the games on the default difficulty, but there’s also an easier difficulty (which may be familiar to players of Klonoa on the Wii), plus an unlockable Hard mode if you’re feeling extra daring. Truthfully, the games never felt too unreasonable, which I would attribute to a steady learning curve for both titles and some pretty solid mechanics that seldom let you down. Klonoa handles very well for the most part, and his hover ability is an absolute lifesaver in many moments.

My one real complaint would have to be that across both titles Klonoa doesn’t really cast a shadow while jumping, so you’ll need to eyeball a lot of landings yourself. This isn’t too detrimental as a whole, but it can throw you off and could really do with a patch. Until then, the float is your friend! 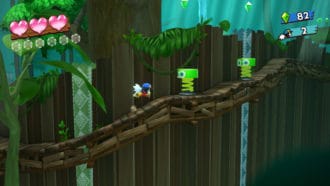 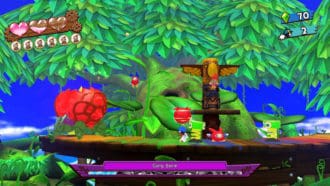 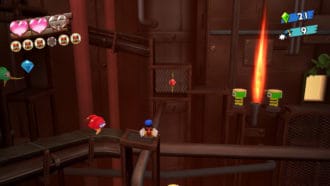 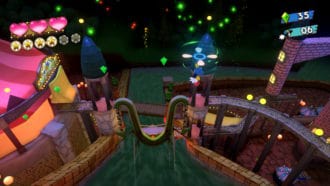 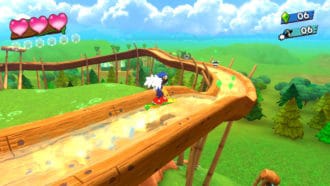 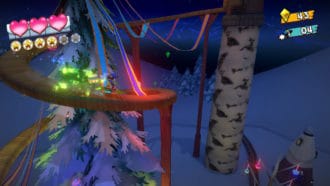 Of course it has to be said: These games are gorgeous. Having played on Switch, I was expecting to get the short end of the stick (hello House of the Dead!), but I was pleasantly surprised to see that all aspects of the presentation were really stellar, even running at a nigh-constant 60 FPS, though it did have some occasional dips. While you may not be blown away by the poly-counts here, the real kicker is in just how cute and colourful everything can be within the world of these titles. Seriously, Klonoa himself is absolutely adorable, and the supporting cast, heck even a number of the enemies you encounter can rival the likes of Kirby in the ‘Dawwwww’ factor. Look at a Moo and tell me part of you doesn’t want a plushie of it. I dare you.

The music is just as great, with ear-worms aplenty right from level one, and I would dare say even the voices of all things add to the experience; yes, it’s all Banjo-Kazooie mumble speak, but it works so darn well, and if you’re anything like me, you’ll smile just a teeny bit every time you leap off an enemy and hear a triumphant WAHOO!

The last thing that really needs to be addressed is the story, and on a greater scope, the replayablity. Klonoa 1 does have a very… emotional ending, shall we say, and even though I had been spoiled on it prior to completing the game (it’s been 25 years, it happens), I still found it upsetting to watch.

I won’t spoil the ending, but I will caution that it does involve gaslighting, so please keep that in mind if content like that is distressing for you; there’s no shame in skipping the cutscene if you need to. Klonoa 2’s ending thankfully is not as dark, and if you’re able to stomach 1’s ending, it should serve as a nice payoff.

“Klonoa is absolutely adorable; even a number of the enemies you encounter can rival the likes of Kirby in the ‘Dawwwww’ factor.”

Moving beyond that, there is incentive to replay both games depending on if you have the patience for it. First off you have the six bubble collectibles, Phantomile residents in the first game and dolls in the second, which are strewn about each stage. Collecting each of these unlocks some bonus levels for you to try out, and the process isn’t all that bad, in my experience at least; as long as you’re thorough and willing to do a bit of tricky jumps every so often you’ll nab these fairly easily.

What I can’t recommend doing is the gem challenges, which want you to collect 150 gems in each stage. From level one onwards these are tedious tasks that require you to navigate many areas flawlessly, many of which you can’t do over without deliberately getting Klonoa killed. They bring to mind the worst aspects of Crash Bandicoot 4 and aren’t worth the rewards they provide, so they’re only for those of you who either love a major challenge or hate fun. Not very wahoo of you.

The Klonoa Phantasy Reverie Series is a real treat to play through, a cute and cheerful (mostly) little romp that seems simple at first, only to progressively test your platforming mettle as you visit more vibrant locations. This is all whilst listening to catchy tunes alongside a spirited little wahoo for good measure, a wonderful little blend of challenge, aesthetic and story. I suppose dreams can come true. Can you hear what I’m saying?

The Klonoa Phantasy Reverie Series has taken two classic games that deserve to be experienced and given them new life, and I’m honestly really glad that so many people will be able to see the magic that I’ve seen from the series. These are solid, polished platforming titles that feel great to play, look lovely to the eye, sound beautiful and are presented properly, with only the occasional frame drops and some annoying collectables bringing them down. If you enjoy platformers at all, be it Mario, Kirby, Spyro, Sonic or otherwise, do yourself a favour and get this compilation – Klonoa deserves to stand alongside them all as one of the greats.