After 25 years, a sequel to Devil Summoner: Soul Hackers is finally here. Soul Hackers 2 is a part of the popular Atlus franchise Shin Megami Tensei and resembles the studio’s most recent games. With all the flair and fashion of Persona 5 in a concise package, this JRPG is an absolute blast to play.

Fate is in her hands

Taking place in the near future, Soul Hackers 2 is set in a cyberpunk, neon-soaked Japanese city. The story follows two godlike beings named Ringo and Figue from a technology aether known as Aion. Given human vessels, they are sent to the tangible world to investigate and avert a cataclysmic event.

Meanwhile, a war has broken out between two factions of Demon Summoners, Yatagarasu and The Phantom Society. With conflicting opinions about the state of society and a round of mysterious murders, Ringo and Figue find themselves stuck in the middle of the struggle that is likely to end the world. Using supernatural powers and the Soul Hack, they revive new allies to save the day.

“…the story is fun and engaging the whole way through.”

The narrative dives into life and death, the human condition, commercialism, and religious overtones. It touches on similar themes of the Shin Megami Tensei and Persona series from the perspective of gods in a technology-driven future. The demon roster is very familiar but in this story they have more in common with the main characters than their human counterparts. Although it’s tangled with anime tropes, this is a fascinating take on common ideas discussed from a new angle.

Two divine newborns can somehow bring back the dead, demons are seemingly everywhere in the city’s Realms, there’s a rapping gangster, and plenty of mystery to uncover. There’s heaps of story to digest in the first few hours and it doesn’t pick up pace until five hours in. As such, the game starts slowly, which isn’t surprising for fans of the Shin Megami Tensei series. It’s needed—especially for how otherworldly Soul Hackers 2 is.

In saying that, the storytelling matches the beats of Persona 5 without the filler content. It may start just as slow, but this game is a much tighter package. Most players will complete the main story in roughly 35 hours. Additional requests, Demonic Compendium, and unlocks may push playtime close to 60 hours. Atlus has listened to its fans and made sure the story is fun and engaging the whole way through. 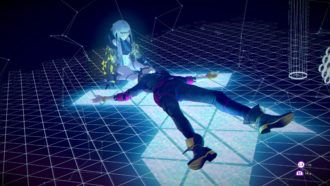 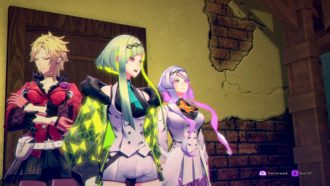 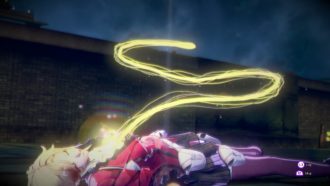 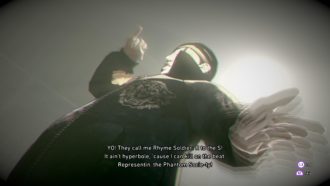 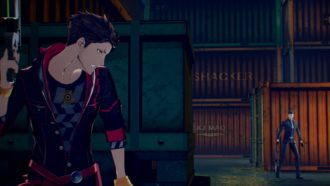 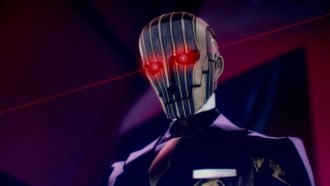 Combat is turn-based with third-person dungeons and world exploring. Battling involves Ringo, Arrow, Saizo, and Milady taking on several enemies at once, using the strengths or weaknesses of befriended demons to make powerful attacks.

Combat mimics the same style and tempo of Persona 5. Victory relies on discovering and exploiting the vulnerabilities of each demon, stacking effective attacks together to unlock a special encompassing move called Sabbath, which is basically the All-Out Attack from Persona. On the other hand, Soul Hackers 2 makes battles less reliant on trial and error with a simplified affinity chart. It may not be original, but it’s still great to play.

“It may not be original, but it’s still great to play.”

Party members have a weapon called a COMP that is upgraded at the aptly named COMP SMITH. Upgrades include attack bonuses, element proficiencies, and Mistiques that grant special effects. With many options, players can build a party however they want. Characters don’t need permanent support or an offensive role in the party, easily swapping demons and equipment to try different strategies. In fact, it’s encouraged to make sure the team is versatile enough against unknown foes.

Unavoidable enemy encounters are made less frustrating with Ringo’s slash. By walking into demons, combat is initiated with stylish animation. Though, if Ringo can sneak up and hit them at the right moment, the ghostly data figure is knocked onto their backside and averted entirely or attacked with an advantage. It’s relieving when recounting low-level areas for requests or if short on health and in need of an escape. 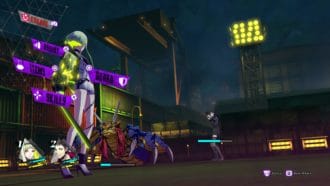 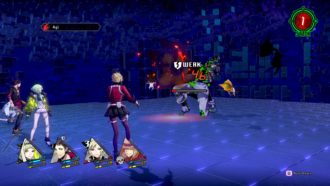 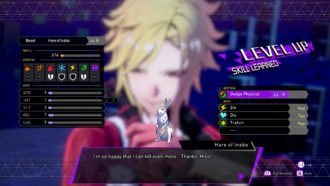 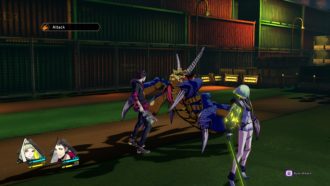 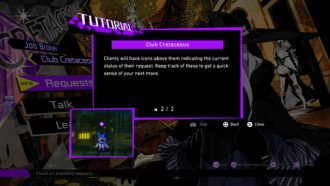 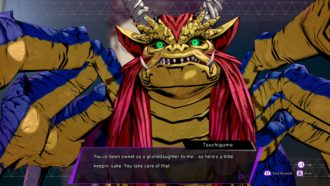 Take a break and go shopping

Outside of the action, Soul Hackers 2 offers exploration and social opportunities. Ringo can traverse many areas of the futuristic city, including several shops and streets. Interactable NPCs will share titbits of world-building or advance requests collected from Club Cretaceous.

Requests are optional side missions that revolve around investigating a mystery, finding a person among the crowds, or dragging the party back into a dungeon to fight demons. Many requests are sadly shallow and boil down to a formula: go there, speak to this person, find this item, and complete the quest. While the rewards are often valuable, it doesn’t make the journey fulfilling.

Ringo can spend time with Arrow, Saizo, and Milady to build a relationship and increase their Soul Level. Raising each party member’s level unlocks Summoner Skills and grants them stat boosts. Grab a drink with Milady and learn about her backstory, breaking down the tough barriers she puts up. These brief but important moments give players a look into the characters and how they feel about the story so far. Getting to know these likeable people makes them and the story captivating.

While exploring the city, players can buy meal recipes alongside traditional healing and stat buff items from vendors. Feeding meals to the group before delving into a dungeon can strengthen their performance depending on how much they appreciate the food. For example, a meal that grants extra experience points against demons higher level than the party is an admirable way to make grinding faster. Using a strategic combination of consumables can make levelling and battles a gratifying breeze. 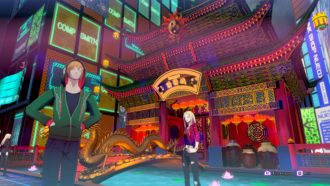 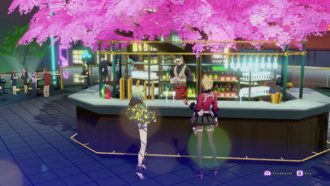 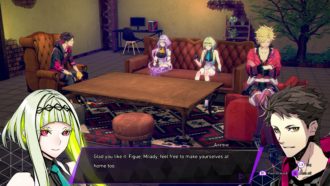 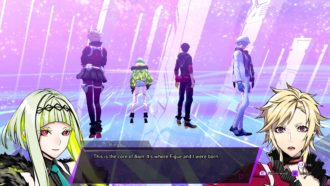 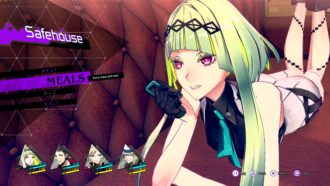 Soul Hackers 2’s distinct visuals stand out against other modern Atlus games. Graphically they are identical, but the vivid colours and neon palette offer a more striking atmosphere than the Shin Megami Tensei series. The stylised user interface, battle animations, storefronts, and character design ensures everything is memorable in this sci-fi version of Japan.

The music is composed by Japanese sound studio MoNACA. The 74-track listing is filled to the brim with upbeat J-pop tunes and fantastic vocals on a handful of the main themes. While the Japanese voices of the game are phenomenal and express tone and character superbly, switching to the English voice acting doesn’t have quite the same consistency. Occasionally delivery of battle lines is flat, characters will talk over one another, and it can sometimes be hard to distinguish between Arrow and Saizo’s voices. The translation may be okay, yet the English sound design and performance are a letdown.

Soul Hackers 2 has lots of dialogue and pop-up boxes explaining the mechanics and story. The information is excellent and can be reviewed in the in-game menu. However, closing a box opens a “yes” or “no” prompt to confirm, which adds an unnecessary step for what should be a single action to dismiss. After eating a meal or using an item buff, the game sometimes doesn’t specify how much a stat raises for the individual character. There are certainly a handful of quality-of-life improvements that need attention.

Soul Hackers 2 is one of Atlus’ best games to date. The story is compelling and rooted in familiar dark themes while avoiding the fluff to be a sharper experience. It refreshes the gameplay of Persona 5 with streamlined changes to make it approachable for a wider audience. Its parallels to Atlus’ most recent JRPGs mean it offers more of the same thrilling style along with the same minor faults. Still, Shin Megami Tensei fans will love this game.