The Mortuary Assistant Review – A chilling slice of life

Modestly chipping away at the indie horror scene has been a publishing studio by the name of DreadXP. You may know them for their bigger more recent releases, or maybe their Dread X Collections, a series collating smaller experiences in the form of playable teasers. Mortuary Assistant, a solo dev effort from DarkStone Digital, is but the latest of these publishing ventures. In it, players control a mortician that must not only work the night shift, examining and tidying up bodies, but also banish the evil spirits that have awakened. Good luck, you’ll need it.

Players assume the role of Rebecca Owens, a young woman fresh on the mortuary scene. An opening cutscene features herself and her grandmother in a diner, discussing her strange new field. Then it quickly devolves into delightfully horrific action. The premise is this: You begin your first shift at the River Fields Mortuary, somewhat against your will. Rebecca shows up for her night shift, only to be locked in by your boss Raymond. You soon learn a demonic presence resides within the Mortuary, binding itself to you and one of the deceased occupants. You may only escape by performing your tasks on three cadavers, identifying which of the three is possessed and burning it, along with the sigils filled in on a ‘Mark’ tablet that reflects that demon’s name.

In both concept and practice, The Mortuary Assistant actually really excels here. It seems to be a teaching from similar previously released media. 2016’s The Autopsy of Jane Doe is a horror movie focused on scares, while the 2017 video game A Mortician’s Tale is an artful indie about the beautiful rituals that come with death bursting with emotions. This is something of a happy, horrifically bone-chilling medium, offering both a clinical and morbid look at one’s expiry.

While the game focuses on its randomised nature and the guessing game that ensues, it also finds time to offer a story to its players. Scripted events will occur that paint a picture of the dark past that haunts Rebecca. These are very clearly quasi memories and hallucinations about Rebecca and her family’s history, whether that’s battling with drug addiction, living with mental illness, or surviving traumatic events. All of these do well in fleshing out the character, providing some haunting and memorable imagery.

Other little mysteries are to be found throughout as well. What do some of the keys you’ll find in various drawers open? What lies beneath the outdoor hatch that leads to the basement? I’ll leave this for players to uncover, but what’s discovered certainly feels like ample rewards.

The Mortuary Assistant’s gameplay loop is really engaging. Upon starting your shift, you must take the gurney to the backroom where the bodies are stored. Return yourself and that body to the main assessing room and you’ll follow a list of steps on a clipboard to complete. Inspecting bodies for marks and noting your findings, you’ll have this unsettling feeling that doesn’t let up for the rest of that given play session. Some bodies will have died smiling, feeling like they’re almost mocking you as you nervously peruse the floor. You’re never at ease.

Then begins the embalming process itself. Around your workspace, you’ll pick up various tools to sew the mouth shut and drain the body of blood, replacing it with embalming fluids and, crucially, a reagent that helps awaken possible spirits within a given corpse. These are all completed largely via QTEs and motions with the mouse, and thankfully aren’t all that taxing.

This decision is a gift as there is so much horror to be subjected to. The Mortuary Assistant wants you to see (and be spooked by) every jump scare and unnerving visual on offer. Terrify you these visuals will. Demonic figures will peer at you around corners, be perched on the top of shelves upon entering a room, or be banging outside a door or window, begging to be let in. Rebecca will receive phone calls that she won’t be able to trust. Reality will bend and it will become difficult for her to ascertain the difference between what is real and what is fake. This disassociation and haunting are made convincing thanks to the able voice acting talent between Rebecca’s actor and the varied, terrifying demonic voices. Something frankly rare in the indie horror space.

Yes, a lot of criticism has been flown to the horror jump scare over the years, especially the over-reliance. However, I’d argue it’s the context that matters, and The Mortuary Assistant more than justifies it. I’ve never been more on edge and terrified by a game, squealing and recoiling many, many times, much to my partner and housemate’s dismay. This only lets up slightly when you notice some of the repeats and patterns, but in a trial and error run-based venture, that’s the nature of the beast. The developer has also tweeted their intention to continue to add a considerable amount of events, leaving this as a potentially fixed issue down the line.

A lot of interest will come from the game’s investigative elements. Boiling down to essentially the identifying and eliminating of a spirit, only in single-player, I’ve no doubt a lot of comparisons will be made to the popular Phasmophobia. Still, The Mortuary Assistant is stronger in this regard. While you’re equipped with fewer tools under your belt, an observant and inquisitive eye is more rewarded. You also have a ticking clock and threat of permanent possession, trackable via regularly interacting with a notepad in your inventory. The closer they resemble demonic symbols or language, the less time you have. This feels more palatable and less time-sensitive than Phasmophobia where I would often be rudely killed before even making heads or tails of what was going on in a given job.

Following the insertion of the embalming reagents into a corpse, players will have to take care at noticing signs of demonic possession. This can include more literal senses of the word, like a body grabbing you or sitting upright during an inspection. Though it can also present itself in more subtle means. Maybe a body’s toes or fingers will bend and crack in a blink-or-you’ll-miss-it fashion, or perhaps you’ll have to pull those previously embalmed and stored, now discovering scratches or marks that weren’t there prior. It’s nitpicky and maybe I need to train myself more, but some of these are just a little too hard to identify for my liking, leaving me purely guessing, nervously entering a body and the Mark into the furnace together. 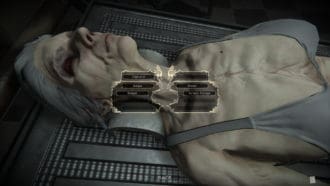 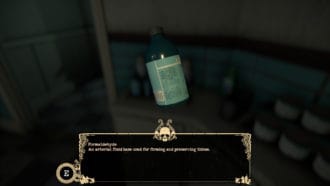 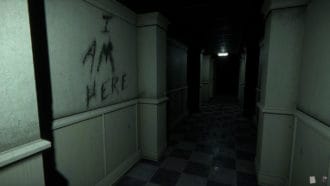 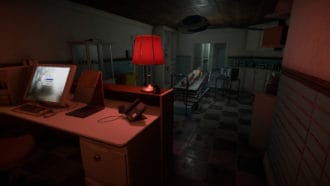 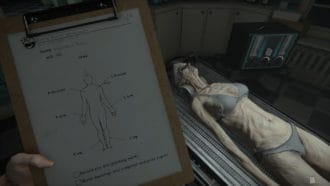 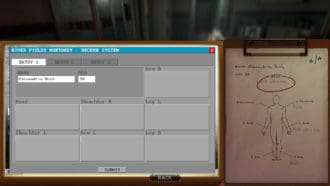 Routinely, Rebecca also must pace around the halls of RiverFields Mortuary, holding up a piece of paper known as a Letting Strip. This is a special scripture that, when at the right place at the right time, will spontaneously burst into flames. Then, revealed somewhere in the environment, will be a symbol or sigil. Identify enough of these and you can, with the help of the database on the back end of the Mortuary’s PC, cross-reference and work out what the name of the demon is. This is a crucial step that must not be ignored. Only then can you burn the body and the Mark together. Only then can you, hopefully, successfully complete a shift.

This side of the investigation was the most engaging and provided the most flair. The computer that you’re using is old and deliberately slow. The database is hosted on a very 90’s text-heavy website where you can learn more about your current hauntings, the telltale signs, and even some of the names of the lesser spirits that appear. All of this is oozing with cult horror investigation vibes, similar to something you’d see in a monster of the week episode of The X-Files.

What it pains me to report is that I did experience some frustrating (but patchable) bugs in my time with The Mortuary Assistant. One update close to the release was filled with a severe bug where simply clicking on the Mark would mean I could no longer open any menus, look at my inventory, interact with objects, or even pause. I could only seem to fix this one error by stumbling into a cutscene or rebooting of the game. I seem to be out of the woods for now, and once again experiencing no issues, but it has hindered my progression. At the time of writing, I’ve experienced 3 of the 5 endings available. I’m hoping the game can stabilise even further upon release as every secret within is well worth exploring.

The Mortuary Assistant is a great game that can only be made better down the line with patches and quality of life fixes. Interruptive but brief bugs did not deter from the wondrous and horrific experience to be had. Deep, bone-chilling moments are aplenty, offering some of the biggest spooks I’ve experienced in a game ever. Narrative moments provide haunting and memorable imagery, making The Mortuary Assistant a must-play horror experience this year. So get dissecting, investigating, and hunting.